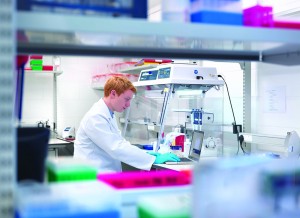 Few other areas of medical research have been the source of as much promise (and hype) as cell therapies. Therapies that use engineered or repurposed versions of our own cells have inspired researchers and media alike. However, the pace at which effective therapies have made it out of laboratories and into clinical practice has not met the worldŌĆÖs high expectations. Although the biology has continued to press onward, the gap between R&D and commercialization remains substantial.

In 1957, the first human hematopoietic stem cell transplant occurred, transplanting bone marrow from one monozygotic twin to the other to treat leukemia (1). That eventually led to Joseph E. Murray and E. Donnall Thomas being awarded the 1990 Nobel Prize in physiology or medicine. By 1998, human embryonic stem cells were generated in the laboratory (2), sparking a flurry of research toward furthering our understanding of what has now become the field of regenerative medicine. As a result, cell therapy now occupies a prominent position among available and upcoming therapies. And it is used for myriad diseases and conditions, including cancer therapy, cartilage repair, and immune deficiencies, many of which have proven to be difficult or impossible to treat by conventional means.

We can divide cell therapies into two branches based on the origin of the cells used: Autologous therapies are those derived from a patientŌĆÖs own cells; allogeneic therapies derive from┬Āan external donorŌĆÖs cells. Those different approaches each come with their own associated benefits and limitations ŌĆö although industry has favored allogeneic therapies because of the initial convenience of scaling up a therapy much like a traditional biopharmaceutical. In fact, a representative from Pfizer at a UK Select Committee on Science and Technology highlighted the biopharmaceutical industryŌĆÖs lack of expertise in the autologous therapies and the necessity to progress only incrementally (3). However, allogeneic therapies rely on donor cells, which means that patients are susceptible to graft-versus-host disease.

Making use of a patientŌĆÖs own cells is clearly preferable. In the past decade we have seen a steady increase in clinical developments in autologous therapies (4). In the past 18 months in particular, scientists have made rapid progress in the clinical biology underpinning autologous cell therapy products, resulting in a number of successful clinical studies.

Despite the success of cell therapies and their valuable contribution to regenerative medicine, such products┬Āremain held back by a number of issues. Primarily, cell therapies are extremely expensive to produce because of their complex manufacturing processes. In many cases, this difficulty has made establishing and maintaining a cost-efficient transition from an academic to a clinical or industrial setting a limiting factor. Autologous cell therapy has progressed because of many biological advancements. But the accompanying technology required for commercialization has not kept up, leaving those companies hoping to move into production in a difficult situation. But innovations in intelligent manufacturing, engineering technology, and physical science might hold the key to this problem. They could provide the platform that a large number of therapies currently showing significant clinical promise will need if they are to proceed as viable treatments for significant numbers of patients.

Challenges To┬ĀManufacturing┬ĀAutologous Cell Therapies
Autologous cell therapies are often preferred from a clinical point of view because cells are harvested from a patient (thereby eliminating the risks associated with graft-versus-host disease or infection transmitted from a donor). Autologous cell therapies have seen a great deal of progress in recent months, including in phase 1 and 2 clinical trials for patients with non- Hodgkin lymphoma (5, 6), a drug to fight adenosine deaminase severe combined immune deficiency (ADA- SCID) (7), the use of T-cell therapy to treat cancer and infectious disease (8), and several other major clinical studies targeting leukemia (9).

Research from such trials serves to advance our knowledge of the biology of both types of cell therapies and the intended disease. But this progress frequently stalls. It is estimated that >90% of all potential therapies fail within the development process because they are determined to be unsafe, lack efficacy, or (more commonly) are too expensive for anyone to pay for them (10).

Cell therapy manufacturers have to contend with many more considerations than do those developing a traditional biotherapeutic. Often, they are stepping into the unknown. The most important consideration is the very nature of cellular material. Cells harvested from a patient or donor can undergo phenotypic changes in response to physicochemical changes or stress as well as to an array of (yet undefined) parameters. Consequently, maintaining control and consistency over cell cultures is crucial when scaling a cell therapy.

Although allogeneic operations can be scaled-up much like other biotherapeutic manufacturing processes (moving to tank bioreactors, for example), autologous cell therapy manufacturing does not allow for that option. Batch sizes in an autologous work flow remain small (about 1 L) because they are harvested directly from patients. So manufacturers wanting to increase the operational scale of autologous therapies need to scale-out rather than up by replicating their manufacturing lines or units of operation.

Increasing the scale of an operation and generating a greater number of batches also means overcoming logistic obstacles. Autologous therapy scale-out is prone to unique challenges arising from clinically limited time for transporting harvested cells to and from a manufacturing site. In as short a time as possible, cells harvested in a clinical setting (e.g., a hospital) must be transported to a manufacturing site (within either the hospital or a remote facility, and potentially at a one-patient-per-machine setting) before being returned to the patient. This problem dictates both the manufacturing model (centralized or distributed) and the clinical-site model (direct delivery or clinical-site manipulation) (4). All must happen in a way that ensures full traceability of the product at every point in its journey and ideally allows the many stakeholders of that process (e.g., physicians, production managers, and payers) to be aware of treatment progress.

High levels of quality assurance (QA) are needed to demonstrate safety standards through implementation of safe, controllable, consistent, current good manufacturing (CGMP)ŌĆō amenable manufacturing procedures (11). Some errors or deviations in cell therapy manufacturing can be controlled with regular training, evaluations, and corrective actions to ensure high quality performances (12). Continual sample QA in autologous cell therapy is especially important because not only are autologous product batches small, but each single batch represents one specific patient. But improvements to technological advances underlying assessment processes should lead to improvements in QA levels.

Jumping┬ĀThrough Regulatory┬ĀHoops
When scaling out, manufacturers often face convoluted regulatory requirements. Complying with requirements can lead to costly delays in moving cell therapies through required clinical stages. Successfully progressing a therapy to the end of clinical trials is often so expensivethat the risk may be too great for some investors (13).

Reagents used in cell culture are prone to variations among manufacturers. That means that to maintain CGMP compliance, some laboratories are switching to chemically synthesized ŌĆö rather than the preferred complex human-derived ŌĆö culture reagents. The lower costs of synthesized reagents and the need for demonstrable consistency means that culture techniques are becoming defined by required chemicals rather than what is optimal (14). Those problems will only grow alongside the┬Āincrease in required reagent volumes as the industry moves to larger trials and ultimately full commercial manufacturing.

The problem of consistency extends beyond cell-culture reagents. Scaling autologous cell therapy operations across different regions (for larger multicenter trials or distribution of a marketed product to more than one clinical site, for example) means that different location-specific regulatory jurisdictions must be addressed. The regulatory structures in both Europe and the United States require establishment and maintainance of consistency between sites or when changes are made to a manufacturing process. This criterion is important because regulatory requirements for CGMP compliance are not always interchangeable ŌĆö with subtle differences in the sterile processing, documentation, and quality control requirements (4).

So a number of issues beyond biology limit autologous cell therapy commercialization and scale-out. Concerns include the need to reduce costs, the time taken to move through various clinical trial stages, and the need for consistency both within and between cell therapy laboratories. Changes to some regulatory steps would invariably benefit those in the cell therapy industry, but that would be just a small piece of the puzzle. However, the ability to develop and produce therapies under standardized and reproducible conditions would be a much more complete and achievable solution.

Next-Generation┬ĀManufacturing┬ĀTechnology
Efficiently transitioning cell therapies from small R&D laboratories to large, profitable, industrial-scale operations will be possible only with support from advanced intelligent manufacturing, engineering technology, and physical sciences. Such advances already have been achieved in other industries such as blood banking, where lean processes and diagnostic testing have led to automated systems to cover patient and specimen identification,┬Ācompatibility testing, and even blood-product release. And emerging new technologies continue to further improve efficiencies (15). Such integrated systems save resources, ensure a high degree of precision, and help manufacturers effectively meet the needs of patients and clinicians.

To make autologous cell therapy work in a larger, scaled-out setting, the technology underpinning much of the operation must be automated (to remove user variation), closed (to ensure patient safety), and integrated (to reduce cost through a simplified work flow).

The systems and methods presently used in cell therapy R&D are designed with expert operators as the intended end users. Repetitive, manual processes such as liquid transfer and handling take up valuable time and are ŌĆ£openŌĆØ procedures, which can increase the productŌĆÖs risk of contamination. Using highly educated experts at all stages is expensive and limits the ability to expand an operation.

An automated, closed, and integrated scale-out process would replace manual steps. Although progress has been made at creating automated systems, such operations still typically lack the ease of use required for commercial manufacture. A system that is easy to use would allow an appropriate cost of goods to be achieved while simultaneously reducing the introduction of human error during critically sensitive stages. It also would facilitate greater consistency within and between sites because of the lack of variability inherent to automated processes.

A distinct absence of regulatory harmonization is still an unavoidable difficulty when trying to achieve multisite comparability. But with the correct technology in place, manufacturers can provide validation data to regulatory agencies. Automated systems greatly aid in providing a sound demonstration of product equivalence, thereby helping industries meet CGMP and regulatory standards.

Streamlining┬ĀWork Flow┬Āand Business Models
Despite problems currently facing autologous cell therapy scale-out, it remains an area of regenerative medicine that holds great promise for treating myriad diseases and conditions. The biggest hurdles to a viable commercial model lie not in the biology, but in the underlying technologies and associated costs. Those problems can be addressed by introducing automated, closed, and integrated systems, which remove manual manipulation, promote consistency, and reduce costs. By ensuring comparable endpoints and demonstrating CGMP-compliant standards, such systems successfully also jump through regulatory hoops.

Edwin Stone, PhD, is in technology and product development at The Technology Partnership; 44-1763-262626; enquiries@ttp. com.