Cell therapy holds the promise of delivering the next generation of future medical breakthroughs. In this respect, multipotent progenitor cells such as human mesenchymal stem cells (hMSCs) have attracted high clinical interest because of their ability to differentiate into various cell types and their immunoregulatory properties. Furthermore, hMSCs express only low levels of class I major histocompatibility complex (MHC I) molecules on their surfaces and are therefore invisible to a hostâ€™s immune system. Finally, hMSCs can actively suppress the innate immune system by expressing a number of secreted factors such as factor H and human leukocyte antigen G5 (HLA-G5).

Together, those features enable the allogeneic use of hMSCs and thus make them an attractive target for commercial therapeutic development. Allogeneic therapies have the advantage over autologous therapies of the potential for centralized manufacturing, storage, and distribution similar to classical therapeutic agents such as small molecules and biologics. In addition, allogeneic cell therapies can be produced at large scales, which will be imperative to ensure commercial viability.

Currently, large-scale expansion of hMSCs is mostly performed using traditional flatbed cultures (e.g., in flasks) and multilayer vessels such as 10-layer and 40-layer stacked trays, enabling lot sizes of 10â€“50 billion cells (1). Although such lot sizes are sufficient to satisfy the needs of clinical development, it is widely believed that multilayer vessels will not constitute a cost-effective approach for marketed products. Thus, significant efforts are under way to develop alternatives to flatbed cultures.

One promising approach is the expansion of hMSCs on microcarriers in stirred-tank bioreactors (2â€“4). This technology will allow for development of scaled-up processes in which expansion can go from small-scale vessels (e.g., 3 L) to large vessels (e.g., 1,000 L). Although such processes are still in development, it can be estimated that a single 1,000-L bioreactor could provide enough cells to produce thousands of clinical hMSC doses. Thus, microcarrier-based expansion of hMSCs offers an attractive process for allogeneic cell therapy products.

In addition to the choice of platform technology, the composition of a cell culture medium used for hMSCs is of significant concern for development of allogeneic cell therapy products. To date, nearly all such products in clinical trials require added serum in their growth media for expansion, most prominently fetal bovine serum (FBS). But that poses an important risk because current good manufacturing practice (CGMP)â€“quality FBS is of limited availability; a single commercially successful cell therapy product could deplete global FBS supplies.

The risk of unknown infectious reagents in FBS is also a significant concern. And some studies of it have demonstrated a risk to patients of immunogenic reactions to xenogenic proteins, which could be transmitted to hMSCs from FBS during culture (5). Thus, alternatives to FBS are under investigation. In this respect, human platelet lysate (hPL) has gained significant interest. A number of studies have shown that hMSCs expanded in flatbed cultures using hPL maintain their multipotency and therapeutic properties (6). And cells expanded in hPL have been used in clinical trials with no signs of significant adverse events. Thus, hPL is considered to be a safe alternative to FBS for expansion of hMSCs.

Differentiation of hMSCs: We trypsinized the hMSCs grown in either PLTMax or FBS-containing media off their microcarriers and plated them onto 24-well tissue culture plates at a seeding density of 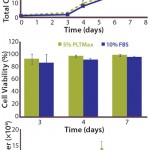 Expansion: As Figure 1(top) shows, cells grown for seven days in hPL showed similar expansion as those grown under standard, FBS-containing media conditions. Initial growth was slow under both sets of conditions for the first three days, which is likely due to seeding the cells directly after thawing, with no recovery phase in flatbed cultures first. However, the expansion rates from days four to seven in both sets of conditions were comparable. Furthermore, as Figure 1(middle) shows, cell viability was unaffected by culturing cells with hPL.

Interestingly, cells expanded in hPL on microcarriers showed no enhanced expansion compared with FBS-containing microcarrier cultures. Previous studies using flatbed cultures had shown that cells expanded with hPL displayed increased expansion rates despite the lower overall concentration of serum: 5% hPL rather than 10% FBS (6). Because hPL contains high concentrations of various growth factors, such as FGF2 and EGF, it is likely that such factors contribute to the enhanced growth observed in some hPL-containing cultures. In that context, it is noteworthy that the FBS-containing growth medium used in our studies was further supplemented by recombinant human FGF2. It is thus possible that the addition of FGF2 to FBS-containing medium can at least in part compensate for the potential advantageous effects of hPL for hMSC growth.

To be suitable for large-scale expansion in microcarrier-based cultures, hMSCs must be able to expand. That is made possible by adding fresh microcarriers to a bioreactor. Therefore, we explored the question of whether hMSCs grown with hPL on micorcarriers could be expanded through serial passaging. 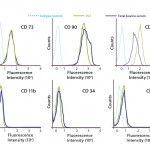 We expanded hMSCs on collagen-coated microcarriers for seven days in the condition without bFGF as described (6). Then we transferred part of the culture (0.5 Ă— 106 cells) to a new spinner flask containing fresh medium and micorcarriers. As Figure 1(bottom) illustrates, we repeated the procedure to ensure continuous cell growth. Our serial expansion of hMSCs with hPL was comparable to the FBS-containing microcarrier cultures. So cells grown under both sets of conditions are able to sustain their growth rate and seed into fresh microcarriers even without the presence of bFGF.

Taken together, the above data show that hPL can be used for large-scale expansion of hMSCs on microcarriers. 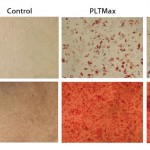 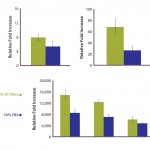 Figure 3A and 3B: hMSCs cultured in 5% and 10% fetal bovine serum (FBS) media conditions retained their identity through an ability for multipotent differentiation.

Multipotency: We next studied whether hMSCs expanded with hPL on microcarriers maintained their multipotent progenitor identity. Although no definitive marker for MSCs has been identified so far, some researchers have made efforts to define cell population through surface-marker expression as well as MSCsâ€™ ability to differentiate into different cell populations. Dominici et al. published a summary of features that define MSCs (7). First, cells must grow adherent to a surface and express CD73, CD105, and CD90 on their cell surfaces. In addition, markers of hematopoietic cell lineages such as CD11b, CD34, and CD45 should not be expressed by MSC cultures. Finally, MSCs harbor the ability to differentiate along the adipose, osteogenic, and chondrogenic lineages.

Using those standard characteristics, we showed that hMSCs expanded for 21 days with hPL maintain their identity and potency (Figures 2 and 3). Microcarrier-expanded hMSCs display positive expression of CD73, CD105 and CD90, whereas no surface expression of CD11b, CD34 and CD45 could be detected (Figure 2). Furthermore, hMSCs expanded with hPL on micorcarriers maintained their ability to differentiate along the adipose and osteogenic lineages, showing that the cells maintained their multipotent identity after culture in hPL (Figure 3). 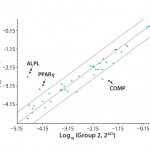 FIGURE 4: Polymerase chain reaction (PCR)â€“array assay showed that three out of 46 distinct genes related to hMSC identity and function appeared to be differently expressed in hPL-cultured and FBS-cultured cells.

To further evaluate the MSC identity of hPL-cultured cells, we performed a series of QRT-PCR assays for genes known to be related to MSC identity and function. Analyzing the expression of 46 distinct genes, we identified three in particular that appear to be differently expressed in hPL-cultured and FBS-cultured cells (Figure 4). Whereas the osteocyte and adipocyte lineage marker genes for alkaline phosphatase (ALPL) and peroxisome proliferator-activated receptor gamma (PPARÎł) display an increase in mRNA expression levels, the expression of the chondrocyte lineage marker, cartilage oligomeric matrix protein (COMP), is reduced in hPL-cultured cells. However, because differentiation along the osteogenic lineage is not affected by those changes (Figure 3) and the expression of additional marker genes is not affected (Figures 2 and 4), it is unlikely that culture of hMSCs with hPL leads to a loss of multipotency and onset of adipocytic differentiation.

Preparation of this publication required efforts of the following personnel at EMD Millipore Corporation: Daniel Kehoe and Michael Phillips.