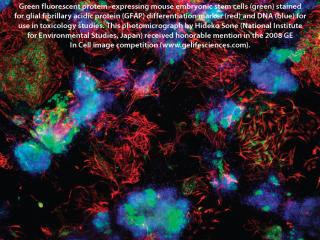 Stem cells have potential as a readily available, consistent source of many differentiated cell types. This unique property can be leveraged both for therapeutic purposes and for facilitating and improving a number of drug discovery and development processes. Large-scale, “industrialized” production of human stem cells in tightly controlled conditions will be required to deliver the quantity and quality of cells needed to support clinical trials and drug discovery development activities (Figure 1). Achieving this level of production while meeting rigorous quality and regulatory standards will depend on further progress in cell culture and scale-up, characterization, enrichment, purification, and process control to safely and cost-effectively deliver a consistent and reproducible supply of cells.

Cell culture can seem to be as much an art as a science, sometimes calling for a “whatever works” approach. Every cell type has unique needs when grown in vitro, and stem cells are certainly no exception. These pluripotent cells have earned a reputation for being difficult to grow and control in culture, in some cases behaving differently for researchers using the same media and protocols. Adding to those challenges is the fact that stem cells can differentiate into >200 cell types. Controlling that process — either by keeping cells in their pluripotent state or driving differentiation down the desired lineage — requires careful orchestration of culture conditions.

In a basic research setting, stem cells are typically grown in small-scale tissue culture flasks using media and culture supplements (e.g., growth factors) that are not always fully defined or characterized and are often of animal origin. Stem cells are frequently grown on feeder layers of mouse fibroblasts, which helps maintain the undifferentiated state. Although soluble factors secreted by such mouse cells help provide a proper environment for stem cell proliferation, use of feeder layers has significant drawbacks in the culture of stem cells for clinical applications. Mouse feeder layers can vary from lot to lot and introduce mouse proteins into a culture system, further contributing to ill-defined, variable culture conditions.

Instead of feeder layers, stem cell cultures can be grown on extracellular matrix extracts and supplemented with conditioned medium from mouse fibroblast cultures. Such an approach eliminates the need for feeder layers, but the culture system still contains animal contaminants and is incompletely defined. The needs of research scientists have driven development and use of media, protocols, and techniques that, although optimized for bench-scale discovery, are not always directly translatable to large-scale, industrialized production. Bench-scale culture conditions can be relatively ill-defined. In many cases, they contain substances of animal origin. Processes used for characterization and enrichment are simply not practical or feasible at industrial scale.

In vitro conditions designed for stem-cell research must evolve to enable industrialization, for which they need to become much more well-defined, consistent, and reproducible (Figure 2). In parallel, next-generation technologies must be engineered to enable robust stem cell “manufacturing” from collection and isolation of cells all the way to patient administration (Figure 3).

As more stem cell–based therapeutics progress toward clinical testing, the consistency, quality, and reproducibility of large-scale in vitro systems become imperative. Use of standardized methods for growing and harvesting cells will be necessary to ensure cell populations with uniform phenotypes and predictable behaviors. Indeed, when “the process is the product” — as would be the case with industrialized production of stem cells — variability is the enemy and must be reduced and controlled as completely as possible.

In light of these challenges, stem cells must be cultured in conditions that comply with current good manufacturing practice (CGMP) standards. CGMP stem cell culture systems incorporate well-defined, well-characterized media and supplements to support stem cell expansion and differentiation. Although the FDA does not mandate a complete absence of animal products in stem cell cultures for early clinical trials, companies strongly desire to move away from use of ill-defined sera that can be incompatible with the need for tightly controlled culture conditions.

Incorporating CGMP supplements contributes to high-quality, consistent, and reproducible culture conditions. When manufactured under CGMP conditions, supplements enabling robust proliferation of stem cells in culture without the need for feeder layers will be fully characterized and validated for activity, potency, and purity. In addition, such supplements are generally produced in larger lot sizes that contribute to the reproducibility of culture conditions.

Some cell culture supplements are current
ly available in CGMP form, but many are not (e.g., the widely used epidermal and fibroblast growth factors). In laboratories where stem cells are cultured for evaluation in a clinical setting, researchers often develop their own CGMP supplements. The process can be time-consuming and labor-intensive, and it doesn’t allow for standardization of culture conditions across different laboratories and organizations.

A number of protocols have been generated for directed differentiation of tissue-specific cells from both rodent and human embryonic stem cells. Inducing controlled differentiation of these cells is typically accomplished using cocktails of media supplements, growth factors, and cytokines optimized to yield a desired phenotype. Protocols to drive stem cell differentiation do not yield homogenous cell populations; cultures contain not only differentiated cells but also undifferentiated stem cells and others that are something in between. Attempts to drive such cultures towards a more homogeneous population can lead to the loss of a significant percentage of cells, in some cases 30% or more. Characterization of cells within a heterogeneous population thus becomes critically important, especially when culturing cells for therapeutic purposes.

Industrializing stem cells is likely to require customized development of characterization protocols. A practice expected to become more common is first to identify a putative set of cell-specific biomarkers during process development and then eventually narrow that set down to just a few markers for use during actual characterization.

A number of enrichment techniques can be used to obtain a desired cell population: magnetic particles, affinity-based methods, and selected killing of unwanted cells. Enriching a large-scale culture for one desired cell type while selecting against others, however, can be an exercise in futility. Existing processes for doing so are not always scalable, and it is unlikely that any would yield a culture that is 100% the desired cell type. Furthermore, quality control steps used during enrichment processes require the sacrifice of many cells, thus depleting their populations.

Introducing or modifying a gene to become a selectable marker within a desired cell population is an option. Such an approach would then need to abide by FDA regulations on recombinant products. With an enrichment process presenting its own challenges and not likely to be 100% effective, careful characterization of subpopulations within a given culture will be critical to industrialization.

Challenges come up throughout the entire scale-up process to culture stem cells for therapeutic use. Because the cells themselves are the product, their culture system must help minimize variability in the population; effectively control differentiation to enable harvesting and formulation without cell damage; and incorporate processes that ensure viability during storage, transport, and administration to patients. In addition to CGMP culture conditions, large-scale production of stem cells will require fully integrated, scalable systems.

New Microcarrier Technology or Alternative Solutions That Enable Particulate-Free Culture of Stem Cells in a Bioreactor: When cultured in bioreactors, adherent stem cells must be grown on solid surfaces such as microcarriers. Unfortunately, small particulates or “fines” are often generated during microcarrier manufacturing. They can contaminate a culture system. Fines can also result from beads being crushed during cell harvest. Because stem cell cultures cannot be filtered to remove such particulates, all particles that are small enough will be copurified along with the cells. The presence of foreign particulate matter such as microcarrier fines is unacceptable for injectable products.

Bioreactors Optimized for Stem Cell Culture: Existing bioreactor technology is designed primarily to support production of proteins expressed in the supernatant of cell cultures. Supernatant samples are easily extracted from these reactors for analysis. For stem cell cultures, however, bioreactors must allow rapid sampling of small volumes that contain actual cells. In addition to monitoring the typical conditions of temperature, pH, dissolved oxygen (DO), and osmolarity, researchers regularly sample stem cell cultures for characterization. Stem cell cultures also need to be well mixed in a bioreactor before sampling because they tend to settle quickly. Sample sizes must be small so that valuable product isn’t wasted, and they must be processed rapidly while cells are still viable.

Technology for Harvesting and Packaging of Live Cells: Existing centrifugation and filtration technologies are not optimized for the harvest and recovery of live cells. Although centrifugation is often used to collect cells for research applications, it is not always practical for collecting large numbers of stem cells. Centrifugation is typically not a closed system, and the shear forces involved can damage cells. Once cells are harvested, they must be rapidly concentrated (their media washed away with buffer solution) and packaged into containers for freezing or administration to patients (the cell therapy equivalent to “fill–finish”). No systems currently exist to efficiently manage this process for stem cells.

Applications in Drug Discovery and Development

In addition to their direct use in the area of regenerative medicine, stem cell–derived cells could offer significant advantages for drug discovery and development. Pharmaceutical companies are exploring use of such cells to elucidate disease mechanisms and pathways, facilitate novel target discovery, assess efficacy, and improve safety profiling.

Among the most promising of applications is investigative toxicity. Efficient and predictive toxicity studies enabled by stem cell–derived cells can be expected to reduce development costs associated with the late-stage failure of small-molecule drug candidates. Identification of such candidates with toxicity issues earlier in development would improve safety for clinical trial participants and patients.

Drug-induced liver injury is the principal reason for suspending clinical trials and withdrawing approved drugs from the market. In fact, this has been the most frequent single cause of safety-related withdrawals of marketed drugs in the past 50 years. Investigative in vitro liver toxicity studies are typically conducted using primary human hepatocytes or an immortalized (genetically transformed) liver-derived cell line such as HepG2. Despite routine use for investigative toxicity, both options present significant drawbacks:

Immortalized hepatocyte cell lines can be cultured indefinitely, which addresses those supply and variability issues. However, these cells display distinct differences from normal liver cells and may not exhibit normal cell behavior or response. For example, most cytochrome P450 enzymes (responsible for drug metabolism) are expressed only weakly in Hep
G2 cells compared with normal human hepatocytes.

The challenges of hepatocyte-based in vitro toxicity testing have led pharmaceutical companies to rely heavily on animal models for preclinical metabolism and toxicity testing. But such models have their own limitations. They may not be fully and reliably predictive of human toxicity. Animal studies are “low throughput” and expensive, and they can raise ethical concerns. Cost and throughput often relegate use of animal models to later stages of preclinical development, after a company has invested significant resources and time in a lead compound. Such delayed evaluation of toxicity contributes to the high failure rate of many compounds in late-stage preclinical testing, which is itself extremely costly.

Since 1998, when stem cells were first isolated from early stage embryos, researchers have sought to engineer optimal conditions for their growth in vitro. Effective and efficient routes to sustain robust growth and control differentiation of these cells are emerging at a stunning pace. Now, at the inflection point between bench-scale and large-scale industrialized production, a different set of biological and technical challenges arises. Use of stem cells both in a clinical setting and to support drug development efforts demands an entirely new level of quality, consistency, and reproducibility. As advancements unfold in characterization, CGMP culture conditions, and integrated manufacturing systems, the promise of stem cells will move closer to reality.