Early manufacturing facilities for large-scale production of biopharmaceuticals were, by necessity, very large. Low expression titers and blockbuster-market products such as monoclonal antibodies (MAbs) combined to require massive bioreactors ā with capacities of 10,000ā 20,000 L or more ā and supporting infrastructure. In my early days covering the industry, I visited a few such facilities and was always awed by the huge tanks and what seemed like miles of piping. A 2010 Pharmaceutical Engineering article described a process modeling approach to building a traditional large-scale facility for Merck Serono in Vevey, Switzerland (Photo 1):

Our design project involved the modeling and optimization of a facility equipped with two production lines, each capable of producing a different MAb. Each line includes four production bioreactors feeding a single purification train. The two production lines have their own independent main equipment, but share tanks for media and buffer preparation. They also share all utilities such as steam, water for injection (WFI), highly purified water (HPW), waste collection and treatment systems. (1) 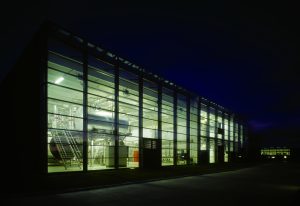 Photo 2: On the cover, the 2005 ISPE award-winning modular facility designed by NNE for Novo Nordisk was a āfast-trackā 18-month project (WWW.NNE.COM).

That epitomizes what may be considered as the apex of multiproduct facility design based on stainless-steel reusable equipment. Another excellent example of traditional stainless-steel engineering (Photo 2) won the International Society for Pharmaceutical Engineeringās āFacility of the Yearā award in 2005 (2). Designed for flexibility to meet undefined demand for a life-saving hemophilia drug, this plant in Denmark is characterized by modular expandability and an open plan, with glass walls that offer views between offices and process areas as well as bringing in light from outside. 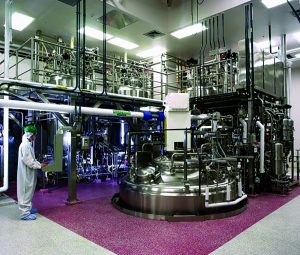 Classic facilities like those ā and older examples such as in Photo 3 ā are still up and running around the world, many making products that are approaching their patent-expiration dates. Developers of their would-be biosimilar competitors are designing new facilities based on new strategies for meeting uncertain demand. Meanwhile, biopharmaceutical companies both large and small, established and start-up, are working on new MAbs and their derivatives, vaccines, and next-generation proteins, as well as gene/cell/tissue therapies, for the worldwide healthcare market of the future. The biomanufacturing facilities that make those new products are likely to look very different from the ātank-farmsā of the past.

Single-Use Technology: The Disruption
As detailed further in the rest of this featured report, the expanding field of single-use bioprocess technologies is radically changing the design, engineering, and operation of biomanufacturing facilities. On page 17, authors from a supplier of single-use components and systems describe how āflexible layouts with ballroom and dancefloor concepts [have] led to facilities being constructed around process specifications.ā They suggest some ways that suppliers such as their company can assist in future facility design, construction, and refitting by improving their equipment standardization, change control, and more. On page 8, authors with the BioPhorum Operations Group (BPOG) outline a number of scenarios for different manufacturing scales and business drivers for choosing among them. āScaling outā rather than up could play a major role in near-future facility design. On page 6, other BPOG representatives highlight continuous processing as another technological advancement that could change what we think of when we say ālarge-scale biomanufacturing.ā Photos 4 and 5 show some examples. 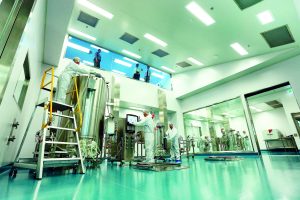 Photo 4: Production suite based on single-use technology at a Patheon facility (WWW.PATHEON.COM) 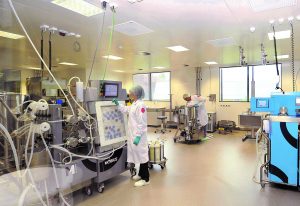 Questions Remain: Despite the well-documented advantages, disposables still present some challenges that increase in significance with scale. Extractables and leachables could compromise cell viability or productivity and even persist throughout purification and drug-product formulation to present a risk to patients. In a 2018 study, an Irish team with supplier and end-user members tested 34 plastic films from available single-use bags (SUBs), using reasonable worst-case extraction conditions to create a database of valuable information (3). Their results demonstrate changing extractables from new types of polymers and advances in polymer film manufacturing, and their database is meant to facilitate toxicological assessments for others. Both BPOG and the Bio- Process Systems Alliance (BPSA) have offered guidelines for extractables/leachables testing.

As disposables pile up in warehouses and waste-collection areas with increasing process scales, environmental sustainability concerns inevitably arise as well. In a world where plastic straws and grocery bags are increasingly the subjects of ban legislation, and the North Pacific Subtropical Gyre has collected thousands of tons of garbage (so far), how do we justify transitioning an entire industry away from reusable stainless steel to disposable plastics? It has been rightfully pointed out that biomanufacturing would represent a mere fraction of the plastic-waste output in the world ā and that, more important, that output could be reduced even further with appropriate disposal methods such as incineration for power generation (4). And waste output is just a fraction of total environmental impact. In fact, a GlaxoSmithKline 2017 benchmarking study concluded that āimproving bioreactor productivity . . . substantially reduces footprint per unit of product due to minimal increased energy and material usageā (5). āAll other modifications examined resulted in modest improvements in total footprint.ā

Process intensification clearly has a lot to offer in saving money and improving sustainability through lean manufacturing, continuous processing, and other advancements. See the article by BPI advisor William Whitford and his colleague Dan Nelson in the main issue accompanying this featured report for more discussion of this topic.

Hybrid Facilities: Best of Both Worlds?
If youāre talking about polymer-based and stainless steel components, even systems that are entirely single-use can be considered āhybridā because most disposables need housings and other support structures made of metal. But when we focus specifically on product-contact surfaces, a hybrid facility is one that uses disposables and reusable systems to combine the benefits of both. Often, this has come to mean single-use technologies in seed-train development but big stainless steel bioreactors for production ā then in downstream processing, again using disposables for in-process holding (6).

The benefits of disposables for building green-field biomanufacturing facilities is clear and relatively simple to analyze. Such facilities are always āright sized,ā and reduced installation and validation times offer significant benefits in facility design and construction. The advantage of retrofitting large-scale facilities with disposables is less obvious and requires much more detailed analysis by simulation or other such tools. Key benefits in a retrofit case are the ability for disposables to reduce interprocess complexity and ādisjoiningā a facility into a simple collection of unit operations with little or no dependencies. Coupled with a focus on critical facility bottlenecks ā particularly in areas where simple bag-based solutions can be installed with little or no engineering or validation work ā offer the most significant potential to allow stainless steel ādinosaursā to be reborn as nimble, agile, and flexible facilities for decades to come. (6)

Until recently, microbial protein expression systems have presented a challenge to suppliers of single-use systems. āTo date, implementing single-use microbial fermentation processes at large-scale has been challenging due to the high gassing rates, mixing power, and heat removal needed compared to mammalian cell culture processesā (7). As a result, large-scale facilities for microbial-expressed products have been hybrid at most ā again using disposables for small-scale and storage/shipping applications but sticking with the old standby of stainless steel for the āheavy lifting.ā

However, companies such as ABEC, Thermo Fisher Scientific, and Sudhin Biopharma have made recent inroads toward offering solutions for single-use and perfusion culture of microbial cells, with yeasts such as Pichia pastoris and Saccharomyces cerevisiae showing more promise than bacteria such as Escherichia coli.

In 2017, Amgen process engineers Rob Boulanger and Mihir Sanghvi made the rounds presenting at a number of meetings on their companyās approach to hybrid biomanufacturing (9). Focusing on media/ buffer preparation operations, they explained that both single-use technology and stainless steel options have pros and cons. They emphasized that identifying key site requirements (multiple products, space, number of batches, cadence, and so on) and conditions (e.g., new facility or renovation) will help a company decide what works best. āA hybrid option would help in extracting the best of both worlds. This gives you increased flexibility, can significantly reduce operational cost and also offset high capital cost.ā