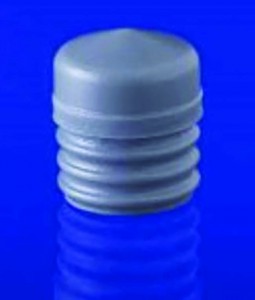 To drive efficiencies in producing parenteral drug products, manufacturers are using containers and closure components that are received sterile and ready to be introduced into filling lines. The effects of sterilization on the properties of ready-to-use (RU) components must be assessed to ensure proper processing techniques and suitability over the componentsâ€™ intended shelf lives. Sterile-drug manufacturers must determine the best sterilization method for components based on their respective drug products and processes. Critical areas of risk include potential changes related to material chemical profiles, delivery system functional performance, and drug product compatibility.

We exposed elastomeric materials and molded syringe pistons to either gamma irradiation emitted by cobalt 60 or steam autoclave before evaluation (1). We conducted tests before and after sterilization of two halobutyl formulations that are usedÂ widely to package parenteral pharmaceuticals (2, 3), each with different formulation ingredients. Evaluations were conducted at 0, 6, and 12 months on the materialsâ€™ physical and chemical properties. We also tested functionality of compression-molded pistons in syringes.

Elastomer Physical and Chemical Characteristics
We evaluated chemical and physical properties of elastomeric materials before and after sterilization. The purpose was to investigate the effect on elastomeric materials used to mold syringe pistons. The chemical and physical properties of each formulation were tested on control test plates and results compared with the sterilized test plates from single batches of the elastomers. We divided the test plates into groups of controls (nonprocessed), steam processed (60 minutes at 122Â Â°C), low-dose gamma processed at a range of 16.0â€“20.0Â kGy, and high-dose gamma processed at a range of 36.0â€“44.0 kGy. To examine the effects of storage over time, we stored test plate samples at 23 Â°C Â± 3Â Â°C and tested at 0-, 6-, and 12-month intervals. Physical tests were conducted to indicate the variation in surface penetration/hardness, strength/tensile, toughness/tear, elasticity/compression, and changes in extractable profiles using the following methods:

We conducted chemical tests on duplicate extracts of the test plates using 2-propanol (IPA). We cut approximately 15 g of each test plate into pieces and refluxed those pieces for four hours. Aggressive conditions were intended to reveal the presence of antioxidants and cure by-products for each elastomeric material. We analyzed the resulting qualitative screening extracts using gas chromatography with a mass-selective detector (GC/MS). Solvent loss was adjusted after reflux to original 50-mL volume to estimate the concentration of significant peaks based on the response of an external standard. A peak was considered for evaluation if the estimated concentration was equal to 0.5 Âµg/g of sample based on response of a surrogate standard.

The compounds in each group were summed and the totals compared for differences. These results indicate the influence of sterilization within a given batch.

Using an Instron electromechanical force tester fitted with a fixture specific for syringes, we evaluated piston performance and collected data on gamma- and steam-processed pistons. The pistons were prepared by subjecting them to a pharmaceutical wash process. We sterilized them using steam (60 minutes at 122 Â°C cycle, dried at 105 Â°C for 30 minutes), or gamma irradiation (low-dose 18.1 kGy, high-dose 38.8 kGy). The syringe pistons were then inserted by vacuum placement in staked-needle glass syringes filled with water for injection (WFI), all from the same manufacturing source. We stored the assemblies at controlled storage temperature conditions (23 Â°C Â± 3Â Â°C) and tested them at 0, 1, 3, 6, and 12 months. We evaluated the influence of the sterilized piston on injectability by measuring the amount of force required to initiate (release) that piston and the force required for it to travel down the barrel. We also examined the fit of the piston in the barrel for gross leaks using dye ingress.

Physical, Chemical, and Functional Testing
Physical Testing: The radar graphs in Figures 1 and 2 express real-time data from the physical tests. These graphs show the overall variation in percent difference comparing unprocessed (control) with processed samples for all four tests at three time points in the same plot. The graphs indicate that hardness data showed little change from control for the chlorobutyl by either sterilization technique; the bromobutyl hardness showed slight variance with gamma sterilization. Elasticity or compression showed greater change from control for the chlorobutyl in both sterilization techniques, but the bromobutyl sterilized by gamma irradiation showed less change. The strength and tear showed greater variation from control â€” especially with high gamma sterilization, which increased over time. 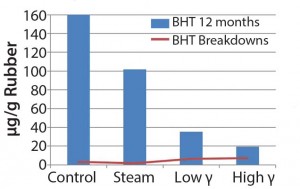 Chemical Testing: Figures 3â€“5 show the volatile and semivolatile data obtained from the GCâ€“MS analysis of the IPA extracts. Semiquantitation of the antioxidant and its transformation/breakdown products for each formulation were plotted for the 12-month time point (Figures 3 and 4). Figure 5 shows the comparisons for the hydrocarbons and oligomers. The amount of BHT and presence of transformation/breakdown products are indicators of elastomer material 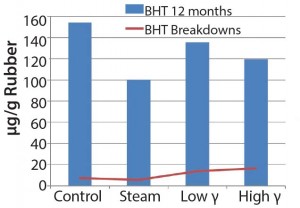 oxidation and potential generation of light hydrocarbons and oligomers. The plots illustrate the difference in antioxidant behavior between chlorobutyl and bromobutyl formulations. Breakdown products tended to increase with gamma sterilization for both formulations, but the bromobutyl formulation showed less BHT in the steam-sterilized samples than in control and gamma- sterilized samples. You could logically assume that the 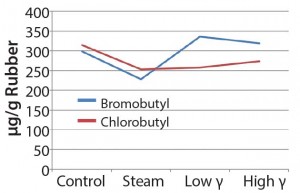 consumption of BHT would increase with increasing breakdown products (as the chlorobutyl formulation showed). However, that was not the case for the steam-sterilized bromobutyl formulation. We can only speculate that BHT hydrolysis products could have formed through steam sterilization or could have been volatilized. In addition, the hydrocarbons/oligomers were lower in the steam-sterilized samples than in the control for both formulations, but the bromobutyl showed considerably higher levels of hydrocarbons/ oligomers by gamma sterilization. Further studies would be needed to understand these findings.

Syringe Functionality Testing: The force graphs in Figure 6 show the average piston release and travel forces for samples tested at time = 0 and timeÂ = 12 months. Each line in the force plot was obtained by averaging the performance of 20 WFI-filled syringes per sample set. The injectability data indicated that the break-loose and release forces were somewhat higher with steady travel force initially for bromobutyl gamma pistons, but after 12 months, we observed a remarkable increase. This variation was even more apparent in the chlorobutyl formulation. The dye ingress testing showed no gross leaks for all sample sets tested. That would indicate no gross change in dimensions with the barrel, regardless of the sterilization technique.

Discussion
We examined the influence of gamma irradiation on elastomeric components used in injectable delivery systems and compared results with that of steam autoclave sterilization. Our study included physical, chemical, and functional properties of pistons for two different formulations. As expected the chlorobutyl behaved differently than the bromobutyl because of the complex nature of the formulations and differences in the chemistry. However, the data showed differences between steam and gamma sterilization methods for the physical, chemical, and functional attributes of the elastomer materials and components. In the physical testing, radar plots showed higher deviation in tensile strength and tear strength for the gamma-irradiated samples when compared with controls over time. Â Our results were generally consistent with those of studies conducted by Kiang et al. on the effects of gamma radiation on elastomeric closures (4). That is probably because gamma irradiation can have a greater influence on polymer cross links, which is where physical durability properties are derived (5).

The compression set of the chlorobutyl formulation seemed to be affected in the same way despite the sterilization method. The compression set for the bromobutyl formulation showed variation from the control to be less with higher gamma over time. That can be explained by the immediate effects gamma irradiation can have on halobutyl elastomers (6). The durometer for either formulation was not affected at all. A durometer measures the hardness of a material, and much of that hardness is derived from the type and amount of mineral filler in the formulation (2).

Chemical testing results for extractables proved to be complicated as well as unique for each formulation having inherent variability. Although the data set was limited, we observed some differences in profiles based on exposure to gamma or steam sterilization. Gamma-irradiated samples appeared to show an upward trend for the detected antioxidant breakdown products. Even the chlorobutyl formulation appeared to have greater loss of BHT by steam sterilization. The bromobutyl formulation overall showed a rise in the antioxidant breakdown products and significantly higher hydrocarbons and/or oligomers by gamma sterilization.

OxidativeÂ radical degradation of polymers takes place under various conditions; in this case, BHT will inhibit oxidation and in the process create transformation and breakdown products. Such mechanisms are well documented (7). The differences in BHT concentration of the two halobutyl formulations prove that energy input will manifest differently for different formulations. Those observations can be attributed to different sterilization techniques. ButÂ they are also influenced by all ingredients unique to each formulation as well as halocarbon bond energies associated with each polymer.

Tests on syringe-system functionality did show that gamma-irradiated pistons had higher breakloose forces. We observed the most significant difference with the 12-month sample of the high-dose, gamma-sterilized pistons (which was congruent with physical test data). Although we detected no gross leaks, critical leak rates would need to be assessed to observe real differences.

Consider the Method
We studied the effects of two modes of sterilization on two different halobutyl formulations most frequently recommended to the biopharmaceutical industry for parenteral closures. Sterilization processes will challenge the performance of elastomeric components, and each method will offer advantages and disadvantages.

Steam sterilization is less harsh than gamma irradiation, but heat and moisture can affect final products. On the other hand, high-energy gamma radiation produces ionization of polymer molecules, which can result in crosslinking and/or chain scission. Those effects can be immediate, cumulative, and damaging, and they can continue well after radiation exposure is over (6).

Our initial data set showed credible differences in properties of elastomers subjected to gamma irradiation compared with steam autoclaving. Our study confirmed that verification of suitable containerâ€“closure materials must consider the influence of the sterilization technique to ensure compatibility, safety, and performance throughout a drug productâ€™s shelf life. In addition, comprehensive studies should be performed relative to the actual injectable system, intended use, type of drug product, and manufacturing processes to weigh the benefits and risks for efficient production of high quality drug products.