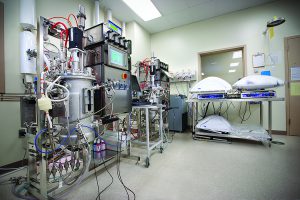 For a contract development and manufacturing organization (CDMO), process development and manufacturing of recombinant proteins must be linked because of tight timelines driven by client expectations. Those are in turn driven by a need for rapid progression to clinical testing. Early in process development, the choice of raw materials needs to reflect existing supply chain and manufacturing infrastructure, but remain suitable for scaling up to meet future needs. One approach is to establish platform processes for a class of molecules such as monoclonal antibodies (MAbs). That strategy includes identifying a standard set of raw materials, process parameters, and analytical methods (a control strategy) for the platform manufacturing strategy. Such a platform is well established at Cook Pharmica, where the process development team continues to evaluate new process technologies to assess them for fit and help the company remain flexible in our offerings. Here we share some data generated with an IgG1 at Cook to provide a perspective into some novel process and analytical technologies that enable rapid process development and scale-up to early phase clinical manufacturing. 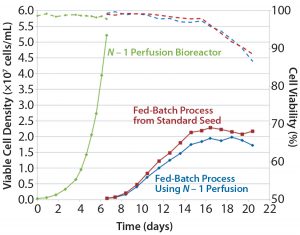 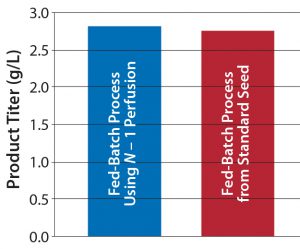 We evaluated a KrosFlo single-use tangential-flow filtration system from Spectrum Labs. This demonstrated the concept of using a 20-L N â€“ 1 bioreactor to reach a cell density >50 Ã— 106 cells/mL in a six-day perfusion culture. We inoculated two fed-batch production bioreactors, one from the N â€“ 1 perfusion and another from a standard seed culture. Process performance was comparable for both.Â Figure 1 shows their results for cell density, viability, and product titer.Â That demonstration shows the possibility for maintaining a standard fed-batch process while shortening its seed train and eliminating large-scale seed bioreactor steps. With continued optimization, this N â€“ 1 perfusion process should be able to reach cell densities close to 100 Ã— 106 cells/mL. This provides more options to optimize clientsâ€™ fed-batch production process for shorter durations or increased overall productivity.

Later, Cook Pharmica successfully implemented the Clarisolve technology into a client process for a vaccine subunit recombinant protein that had been very problematic for other methods. In this process, traditional depth-filter capacities were greatly reduced (<20 L/m2). Once we implemented a flocculationâ€“Clarisolve harvest step, depth filter capacities increased significantly to about 75 L/m2. This new technology was successfully introduced into phaseÂ 1 clinical manufacturing.

Figure 3: Residual DNA (left) and HCP (right) levels after protein A purification with and without Emphaze hybrid purifier

For another process, we evaluated an Emphaze anion-exchange (AEX) hybrid purifier from 3M as an alternative membrane for harvest clarification in an immunoglobulin G1 (IgG1) antibody purification process (4). According to the supplier, this allsynthetic, charged AEX membrane can provide consistent turbidity of <5 NTU with significant HCP and DNA clearance to improve the performance of protein A capture. In our experience with this membrane in the IgG1 process, we found that product purity after protein A chromatographic purification was at or near injectable quality in terms of HCP and DNA content (Figure 3). HCP levels had been reduced to <10Â ppm, and residual DNA content was reduced to <3 ppb. That enabled increased process intensification and performance â€” particularly for the protein A step.

Figure 4: Protein A resin comparison across a growing landscape of multiple suppliers

We have continued evaluations of several high-capacity resins to furtherÂ reduce downstream bottlenecks for our clients. As an example, we evaluated protein A resins from five different vendors to compare costs and dynamic binding capacities (DBCs) against process performance (Figure 4). All the resins we evaluated provided acceptable step yields for IgG1 near 100% and monomer content near 95% (determined using size-exclusion chromatography) with our platform process. However, we found differences in residual HCP and rDNA (Figure 5), all of which are still acceptable when combined with an overall purification process.

Analytical Technologies
Another way to increase capacity and speed is to use high-throughput analytical methods during screening studies, both for drug-substance processes and drug-product formulation development. When implemented appropriately, these methods are very effective for generating large amounts of useful process data in shortened times. That enables robust processes with rapid turnaround in development â€” vitally important to CDMO operations â€” and ultimately shortens technology transfer for good manufacturing practice (GMP) manufacturing. It is especially useful considering the large quantities of samples that can be generated during product/process development. By combining high-throughput methods with automated data analysis, the time for those analyses is also significantly reduced.

Figure 6: Linear correlation between cIEF and LabChip CEZ for the result of main-peak percentage after seven days of thermal stress (40 Â°C) on an IgG1 across 96 formulations

For example, we recently implemented LabChip capillary zone electrophoresis (CZE) from Perkin Elmer as a high-throughput analytical method for MAb charge-variant characterization. Figure 6 shows the comparability between capillary isoelectric focusing (cIEF) using a Maurice iCE3 system from ProteinSimple and LabChip CZE for the main-peak percentage of a model IgG 1 MAb. We staged the IgG1 formulated in 96 different formulations on 40 Â°C storage for seven days, finding very consistent main-peak percentages for both methods, and their results have linear correlation with R2 > 0.9.

With the above approach, we typically identify top formulation candidates within three weeks of analysis.

Be Nimble, BeÂ Quick
Driving process development innovations and adopting new processes and analytical technologies as appropriate for a given molecule and phase of development are keys to success. CDMOs must remain flexible to meet the growing demands of increasingly complex recombinant protein therapeutics.

Acknowledgments
We acknowledge contributions by Bingqing Wang, Todd Stone, Carl Richey, and all members of the development group in supporting this study. Special thanks to all our suppliers.