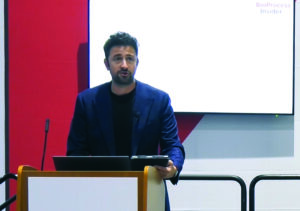 Stanton closed the BPI Theater at BIO 2022 with this analysis. Watch his full presentation and others online at https://www.bioprocessintl.com/BIO-Theater-2022.

Before 2000, some drug companies (e.g., Merck, Novarits, Boehringer Ingelheim, and others) offered their excess manufacturing capacity to other drug makers. Chemical companies provided fillŌĆōfinish and related services. Between 2000 and 2008, a number of dedicated CMOs emerged: Patheon, Roche, CMC Biologics, Lonza, Catalent, Recipharm, and so on. With easy access to capital, many purchased or built biomanufacturing facilities. The financial crisis in 2008 actually created a boom for CMOs. Rather than small biotechnology companies and startups, funding went into the outsourcing industry, leading to a proliferation of small CMOs. Fujifilm Diosynth bought the biological outsourcing business of Merck in 2011, part of an emergence of Asian CMOs that included Samsung Biologics and WuXi Biologics.

The next 10 years brought consolidation and growth along with the transition from CMOs to CDMOs. Many large companies expanded their capabilities through mergers and acquisitions (M&A). Single-use technology (SUT) became an enabler, but fixed capacity based on stainless steel hasnŌĆÖt gone away. Illuminating examples include Boehringer IngelheimŌĆÖs recently opened US$800 million large-scale facility in Vienna, Austria and FujifilmŌĆÖs billion-dollar projects under way in Denmark and North Carolina. During this ŌĆ£boomŌĆØ period, some CDMOs acquired large pharmaceutical facilities only to serve their former owners.

Capabilities expanded to cover advanced therapies and other new modalities. The associated complexities led some CDMOs to change strategies. Now competing with drug developers for talent, many are leading the way in many advancements for development and manufacturing. Meanwhile, large companies are swallowing up small CDMOs that were launched from private equity a decade before.

Then came the global pandemic, which has cemented the idea of outsourcing and collaboration in the biopharmaceutical industry ŌĆö through efforts led primarily by drug companies rather than service providers. CDMOs have been some of the ŌĆ£big winnersŌĆØ from the pandemic. As all functions across the supply chain ŌĆö from drug-substance production to fillŌĆōfinish ŌĆö were needed in great measure over the past couple years, CDMOs provide to be up to the challenge. At one point, Catalent was serving more than 80 projects related to COVID-19.

The emergence of mRNA technology has been validated by vaccine successes. ItŌĆÖs no surprise that CDMOsŌĆÖ interest in mRNA is increasing. New opportunities inevitably bring new entrants to the industry. Several large startups have been funded by private equity. With $1.2 billion, for example, Resilience has acquired or obtained 10 manufacturing sites in North America. After buying Patheon for $7.2 billion in 2017, Thermo Fisher Scientific has moved on to a $1.7 billion acquisition of Brammer Bio. And Danaher Corporation (owner of both Cytiva and Pall) entered the CDMO space in 2021 through its $9.6┬Ābillion acquisition of Aldevron.

The entrance of companies formerly known only as technology suppliers will change outsourcing again. Now those CDMOs will have direct access to the biomanufacturing equipment and consumables that their parent companies make, potentially enabling them to reduce their own cost of goods (CoG) while ensuring materials supplies.

And the industry has come full circle in that some ŌĆ£big pharmaŌĆØ companies are updating their business models to include providing services. Note Boehringer Ingelheim ŌĆ£Inspire ExcellenceŌĆØ program, AbbottŌĆÖs AbbVie CDMO business, and PfizerŌĆÖs acquisition of Hospira. SanofiŌĆÖs small-moleculeŌĆōfocused EuroAPI is turning its interest to the mRNA space. And Novartis ŌĆö which has been manufacturing as a third party for years ŌĆö has begun advertising its cell therapy capabilities.

Both demand and supply of CDMO services, already growing, were accelerated by the pandemic. COVID-19 has shown that collaboration is essential and that using third parties is part of that. Working with new modalities demands it. CDMOs are serving both as middlemen between end users and bioprocess vendors and as technology providers, themselves. As the big players get bigger, new players arrive on the field. I believe that CDMOs will be the driving force of the industryŌĆÖs foreseeable future.

Dan Stanton is cofounder and editor of BioProcess Insider; dan.stanton@informa.com; 44-7552-290-774; https://bioprocessintl.com/category/bioprocess-insider. This report is adapted from his presentation at the BPI Theater in the Bioprocess Zone at the 2022 BIO International Convention.

View the full presentation below.