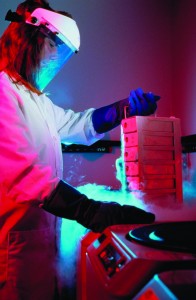 Development of highly potent active pharmaceutical ingredients (HPAPIs) is clearly a pharmaceutical industry trend. Highly potent drug products involve active agents and APIs that are so potent therapeutically (or simply just outright toxic) even in small dose that special precautions are required during their manufacture â€” particularly when handling the active agents. Such requirements include maximal containment and isolation of the process stream. Worker exposure and environmental release clearly pose problems. The necessity and intensity of containment efforts with HPAPIs largely define products based on them. Specialized analytical techniques, equipment and knowledge are also required with ADCs.

Among HPAPI drugs, exemplary products include highly potent proteins such as some hormones; biological toxins such as botulinum toxin; and antibodyâ€“drug conjugates (ADCs), formerly commonly referred to as immunotoxins. ADCs are by far the fastest growing class of HPAPI drugs, and perhaps the fastest-growing class of biopharmaceuticals in the development pipeline. ADC constructs generally involve three parts: First is a recombinant antibody (or antibody-like Fc fusion, monoclonal antibody (MAb), or fragment), generally with a target cell-typeâ€“specific target. That component is covalently linked by means of a linker group, used to conjugate or bind the antibody. Finally, on the other end of the linker is a cytotoxin, a highly potent cell-killing toxin (or less frequently, a cytokine), with these either manufactured chemically or through bioprocessing (1).

The antibody component of the molecule provides target specificity. Once the ADC binds to its cell-surface antigen/ligand, it enters the cell, and the hyperpotent toxin is released (e.g., by action of cellular enzymes or intracellular higher or lower pH). The MAb specificity and intracellular release of toxins reduce ADC specificity and reduces the number of adverse effects relative to many other products. For example, cancer patients treated with tumor-targeted ADCs can generally expect no or less-intense side effects such as hair loss, nausea, and systemic toxicity. In addition, the bioindustry has gained a vast amount of knowledge about MAbs as stand-alone products that have been screened and studied. So companies can now “repurpose or recycle” that knowledge for ADC candidates. That opportunity has been among the primary reasons why a large number of companies are developing ADCs.

In BioPlanâ€™s research, we find that most (an estimated â‰¥60%) ADCs in development are targeted to cancer treatment. Such products involve a tumor-cell surface antigen and/or ligand-specific antibody linked to a cytotoxin. ADCs â€” with their targeting distinct tumor antigens â€” are well suited for cancer therapeutics.

A growing number of ADCs are in research and development, and only a few have reached the market to date (discussed below). But I project the market to grow to â‰¥$10 billion in 10 years. Many ADC constructs, toxins, and conjugation chemistries are under patent â€” the result of recent yearsâ€™ growth in ADCs development, including the entry of many new players. But ADC products are nothing new, with immunotoxins long an area for candidate biotherapeutics development.

ADCs present major challenges for developers and manufacturers. They involve complex supply chains, including interactions with contract manufacturing organizations (CMOs). As noted, three different components (MAb, linker, drug) each need to be developed and manufactured under current good manufacturing practices (CGMPs). Each part â€” together and alone â€” must perform as desired.

MAbs are the relatively easy part, because their technologies are now mature and widely disseminated. But designing a MAb to work in concert with other components as an ADC remains a challenge.

Linker chemical technology is rather specialized and available from limited sources (Seattle Genetics and Immunogen are currently major licensing and reagent sources). Linkers are generally purchased from chemical manufacturers or CMOs.

Manufacturing the toxin component is dangerous, complex, and costly. Toxin production â€” both up- and downstream â€” needs full isolation to prevent release of toxic product. So ADC toxin manufacture (whether by chemical or biotech methods) involves extensive use of isolator cabinets and rooms, other safety-related features, and careful environmental monitoring. ADC production facilities generally must not allow toxin concentrations >1 ng per 1 m3 of air. Additional measures are often put in place, including the use of external air supply masks and full-body protective suits. One CMO reports needing to meet an occupational exposure limit (OEL) of <30 ng/m3 at multikilogram scale per batch. Also, conjugation â€” the linking of a MAb and toxin â€” involves dangerous, complex and, thus, costly chemical reactions with essentially zero release of the toxin and ADC toxin conjugate.

ADCs development and manufacture is a complex and capital-intensive task. It involves combining specialized biotechnologies with chemical facilities and expertise. Many big biopharmaceutical companies already have MAb capabilities and expertise, so a number of those facilities are active in ADCs development. Some small-product and technology companies as well as foreign new entrants (e.g., Piramal) also are developing ADCs (see “ADC Companies” box).

The costs, complexity, and need for very specialized equipment and expertise for handling HPAPIs are also reasons why most ADC development efforts involve collaboration, partnering, and licensing. So CMOs are commonly used for at least some parts of ADC manufacture (see “CMOs” box). Lonza, for example, can handle most of the different aspects of ADC manufacture (e.g., MAbs, linkers, toxins and conjugates). Partner companies generally bring together additional pieces of the manufacturing process.

Essentially, absolute containment, (nonrelease from a process stream) is a requirement. Requirements for full containment can complicate bioprocessing and increase costs. Containment typically is maintained using negative pressure within sealed bioprocessing equipment, within redundant sealed enclosures/rooms, and using appropriate filters for air input and exhaust. But configurations can be complex and costly to implement with toxins and ADCs, because a lot of bioprocessing (particularly, microbial bioprocessing) is conducted under higher-than-ambient atmospheric pressure.

Single-use systems might not be applicable because disposable components might not be sufficiently robust or because postuse disposal of contaminated equipment is difficult or impossible (e.g., if no waste processors will accept such equipment). In addition, single-use bioreactor and other vessel liners/bags are reported to have a relatively high failure rate (in this context) of about 1/100 (2). Thus, biological toxin manufacturing will generally be anchored by stainless steel systems and vessels, and stainless steel or glass can be used for chemical processing.

Bioprocessing staff must have special training. Operators are likely to be required to wear full-body exposure protective gear â€” not because the working environment is toxic, but rather in case of a breach of containment of other release/exposure. Manufacturing toxins and ADCs is similar in many respects to manufacturing under biosafety level 4 (BSL-4) biohazard conditions, manufacture of chemical and biological warfare agents, and hyper-potent pesticides, hormones, and so on. A major commitment to worker and environmental safety is required. Besides being expensive, any clean-up and remediation of toxic releases may require facility shut-down.

About 30 ADCs are currently in clinical trials, and more than 200 are reported to be in preclinical development. ADC developers include most every successful MAb developer and many other major biopharmaceutical companies. But many products and new component technologies (for linkers and toxins) are being developed by smaller companies. Multiple ADC products (discussed below) have been approved, and because ADCs are not presenting major problems as a class or in clinical trials, even more approvals can be expected.

Trade literature shows that considerable investments are being made in developing ADCs and technology platforms. Needed specialized manufacturing facilities require significant investments in ADC infrastructure and development. For example,

The first ADC (then known as an immunotoxin) approved by the FDA in 2000 was Mylotarg (gemtuzumab ozogamicin) from Wyeth/Pfizer for treatment of CD33 positive acute myeloid leukemia (an orphan indication) (3). Mylotarg was initially jointly developed by Lederle Labs, later Wyeth/Pfizer, and Celltech Group plc. The product involved gemtuzumab, a recombinant NS0- expressed MAb having specificity for CD33 receptors (on leukemic tumor cells) covalently linked to calicheamicin, a potent bacterial-derived toxin (also referred to as a cytotoxin or antibiotic). Calicheamicin is obtained from fermentation of Micromonaspora echinospora ssp. calichensis bacteria. The conjugate is formed by covalent linkage (condensation) of a bifunctional linker, 4-acetylphenylacetic acid (AcBut linker), activated calicheamicin (calicheamicin N-acetyl gamma dimethyl hydrazide), and the MAb.

However, exemplifying the problems encountered with early ADC products, Mylotarg was voluntarily withdrawn from the market in 2010 after failing a noninferiority trial against conventional treatment. Also, only about 2,500 patients were being treated with Mylotarg, so it never became a top-line option (total revenue only in the $10 millions, likely insufficient for Wyeth/Pfizer).

Now, two ADCs are marketed in the United States, and both are on track to be blockbusters (â‰¥$1 billion/ year revenue). They are Kadcyla (ado-trastuzumab emtansine) from Genentech/Roche and Adcetris (brentuximab vedotin) from Seattle Genetics, Inc., codeveloped and marketed by Millenium/Takeda (3).

The FDA approved Adcetris in August 2011, and EMA/EU granted it approval in late 2012. The product is a lyophilized formulation of a CD30-targeted ADC consisting of a CHO-expressed MAb, cAC10, specific for human CD30; monomethyl auristatin E (MMAE), a microtubule disrupting agent; and an intracellular protease-cleavable linker that covalently binds MMAE to cAC10. Both the toxin and linker are produced by chemical synthesis. Each ADC conjugate on average has nearly four toxin molecules attached. Like many ADCs, the Adcetris product is a heterogeneous mixture, both in terms of drug conjugation ratio and the posttranslational modifications of the antibody. Before conjugation, the precombined toxin-linker and MAb are obtained from different CMOs. Illustrating the complexities of developing modern cancer therapeutics, Adcetris also involved parallel development of a CD30 diagnostic to identify CD30+ patients suitable for treatment. Adcetris is exemplary of linkers and related technology licensed by Seattle Genetics. Its sales had $269 million in revenue in 2013, and the product is expected to become a blockbuster, if it is approved for additional indications.

Kadcyla gained FDA approval for Hodgkinâ€™s lymphoma in February 2013 and EMA/EU approval in September 2013. The product is a lyophilized formulation of trastuzumab-DM1, or CHO-expressed trastuzumab, the same MAb that is the active agent in the companyâ€™s Herceptin cancer therapeutic (an example of how MAbs can be recycled into ADCs) covalently conjugated to DM1, a semisynthetic

maytansinoid antimitotic drug, by means of a nonreducible thioether (4-[N-maleimidomethyl] cyclohexane-1- carboxylate; MCC) linkage. Thus, it is essentially the active agent in Herceptin (which had 2013 sales near $7 billion) linked to DM-1, with the conjugate containing an average of 3.5 DM1 molecules bound to each antibody. Peak sales projections are as high as $2â€“5 billion/year. Kadcyla is Rocheâ€™s first approved ADC, but (much like other companies active in the field) the company is using its technology platform for developing multiple products. For example, Roche has eight other ADCs under development. Kadcylca is exemplary of linkers and related technology licensed by Immunogen.

HPAPIs â€” and particularly, ADCs made with them â€” are on track to become a major class of marketed products. They offer the ability to extend current MAb development and bioprocessing to a whole new set of products that can be more selective, potent, safe, and effective. The complexity of individual ADC components (MAb, linkers, and toxins), their design and manufacture, and the integration of all components into conjugates affords considerable options for development of unique technologies and products. ADCs are so complex, that currently biosimilar versions are considered technologically impossible, unlike MAbs, which is a class of products with biosimilars already entering the market. ADCs offer opportunities for companies to develop truly innovative products that are complex and expensive to develop and manufacture, while also offering opportunities to avoid replication, biosimilars and other competiing follow-on products.