Vaccines represent a significant, increasing area of product development within the biopharmaceutical industry. The segment includes several blockbuster commercial products, nearly 300 vaccines currently in development, and many more candidates in various stages of research and preclinical development (1). The 2010 worldwide vaccine market was ~US$20 billion and is projected to approach $30 billion by 2015 (2). Conjugate vaccines sales currently exceed $7 billion and are expected to increase substantially. Conjugate vaccines (covalently linked polysaccharide and protein) have shown to be effective against several bacterial pathogens such as Haemophilus influenzae type b (Hib), Streptococcus pneumoniae, Neisseria meningitidis, and Salmonella enterica serovar Typhi (3).

The Role of Carrier Proteins

Carrier proteins increase the immunogenicity of peptides, oligosaccharides, polysaccharides, and haptens. Polysaccharides, which are T cellāindependent antigens, are poor immunogens unless they are chemically linked (conjugated) to proteins. The role of a carrier protein is to enhance immunity by providing T-cell epitopes through MHC Class II presentation to T-helper cells. This mechanism affects both quantitative and qualitative aspects of the immune response. That is, carriers both increase the magnitude of the immune response as well as engender B-cell āmemory.ā 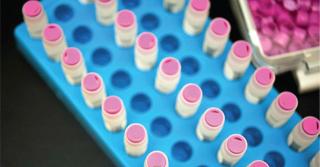 In addition to the nature of hapten, oligosaccharide, polysaccharide, or hapten antigen itself, a number of factors determine an antigen’s immunogenicity. Such factors include the number of antigens linked, conjugation chemistry, linker, conjugation sites, host species, dosing, route of administration, and nature of the carrier protein. Access to clinically proven safe and efficacious carrier proteins is critical for conjugate vaccines research.

Some carrier proteins can be purchased from standard catalog reagent suppliers. However, such proteins are typically nonāgood-manufacturing-practice (GMP) materials, andtherefore not acceptable for clinical use. Until recently, no carrier proteins used in licensed vaccines and produced under current GMP (CGMP) conditions have been available to academia and biotechnology companies without a material transfer agreement and/or a partnership with a vaccine manufacturer.

The need for such agreements has restricted access to clinical-grade carrier proteins, thereby severely limiting both research and commercial development of vaccine candidates. Consequently, academic and preclinical vaccine studies have been conducted with other carriers such as bovine or chicken serum albumin (BSA or CSA) and keyhole limpet hemocyanin (KLH). Although those carriers are adequate for preliminary research investigations, they are largely unacceptable for development of commercial, prophylactic vaccines. Moreover, the preclinical data generated from such products may be quite different from data generated from studies using clinically acceptable carrier proteins. For example, albumins are more robust than either tetanus toxoid or CRM197 and allow easier conjugation of haptens; however, they do not provide a clear clinical development path in accordance with FDA guidelines. Tetanus toxoid and CRM197, for example, have a greater tendency to aggregate than do albumins, especially under acidic conditions. Therefore, conjugation approaches that are successful with albumin as a carrier can be much more difficult to implement with tetanus toxoid and CRM197.

Lack of access to suitable carrier proteins is similarly problematic as a vaccine project advances toward clinical trials. Presenting preclinical data generated using model proteins like bovine serum albumin (BSA) to the FDA often calls into question the validity of the results. Key preclinical safety, immunogenicity, awnd potency studies may need to be repeated using clinically acceptable carriers. Thus, early availability of affordable CGMP-grade carrier proteins would speed preclinical and clinical evaluation and product development by allowing initial research to be done with the same carrier protein that will be used in the final clinical and commercial product.

Nearly all conjugation methods use the carboxyl groups of glutamic and aspartic acids or the primary amines of lysine residues. However, different conjugation chemistries and applications place different demands on a carrier protein. Toxoid (inactivated) carrier proteins such as tetanus and diphtheria are produced using formaldehyde treatment of crudely purified proteins, resulting in relatively lower purity. The cross-linking process blocks many of the lysine groups that are typicallyrequired for conjugation. The heterogeneous nature of toxoids complicates conjugate purification and characterization. Despite those limitations, toxoids have proven to be useful as carrier proteins.

CRM197 is a genetically detoxified mutant of diphtheria toxin resulting from a single amino acid substitution (glycine 52 ā glutamic acid) that is widely used as a carrier protein for protein-polysaccharide conjugate vaccines (5). CRM197 is secreted into the Corynebacterium diphtheriae culture supernatant, recovered after separation of biomass, and purified using filtration and chromatographic steps. (6). Typically titers and overall yields are relatively low, although some proprietary higher yielding strains have emerged. Because CRM197 is not inactivated by cross-linking, its full complement of surface lysines is available for conjugation. The purity of CRM197 is much higher than that of tetanus and diphtheria toxoids.

CRM197 is used as the carrier protein for Pfizer’s highly successful Prevnar conjugate vaccine for pneumococcal disease, a multibillion-dollar franchise, as well as HibTiter (Haemophilus influenzae b) prodcut and Novartisā Menveo meningococcal vaccine. CRM197 has been traditionally produced by fermentation of C. diphtheriae C7 (Ī²197) tox(ā) strain. Although this strain is available for research from the ATCC (product #53281), a license must be obtained for commercial use. Further, the biosafety level 2 (BSL-2) nature of this organism requires a production facility with appropriate level
of containment.

Using preclinical CRM197 for early stage vaccine development assures continuity of supply for stage-appropriate grade and quantities of CRM197 as the development program advances through clinical and commercial stages. The Serum Institute of India manufactures the CRM197, and the Reagent Proteins business division of Pfenex sells it, thus providing clinical-grade carrier protein for research and development work. 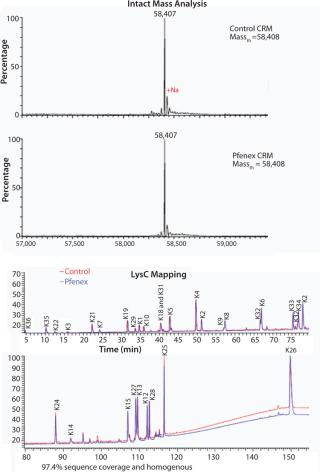 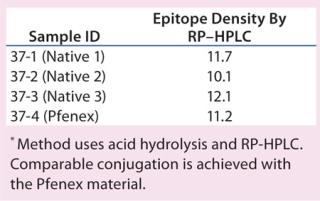 P. fluorescensāexpressed CRM197 is being used by several companies (including the Serum Institute of India) in their conjugate vaccine programs. āUtilizing Pseudomonas-based CRM197 has rapidly progressed our research and development efforts, streamlining and expediting our progress to the clinic,ā says Dr. Umesh Shaligram of the Serum Institute. Multiple conjugate vaccines using P. fluorescensāexpressed CRM197 are currently in various stages of clinical trials in the United States, Europe, and India.

The commercial availability of CGMP-grade CRM197 provides a conjugate vaccine developer with the option to source a carrier protein rather than having to develop an entire production process de novo and produce the carrier under CGMP conditions. A Type 2 biologics master file for P. fluorescens āexpressed CRM197 has been filed with the US FDA. The agency will streamline and simplify regulatory filings and CMC section preparation for conjugate vaccine developers.

There are many advantages for a conjugate vaccine developer to purchase bulk carrier protein rather than develop the product in house. Developing your own productionprocess for a carrier protein will require both time and financial opportunities. Small biotechnology companies would need to expend time and resources of scientists to determine optimal expression and purification processes for CRM197 then pay a contract manufacturing organization (CMO) to manufacture the carrier according to CGMP. Purchasing preclinical and CGMP CRM197 for research and development efforts allows you to focus on the novel parts of a vaccine candidate (e.g., protective antigen, process, or formulation) rather than on reinventing the carrier āwheel.ā

The cost of building a new BSL-2 biologics manufacturing facility in the United States or Europe start around $35 million and, depending on capacity, can cost as much as $200 million. Such a facility-build and validation stage takes almost two years to complete; and that is all before the additional $2ā5 million and two years needed to develop a production process (8). Those costs include the effort required to develop a production strain, fermentation and purification processes, capital investments in a production facility, and extensive validation needed for production. Such resources could be better spent on addressing the complexities of developing and formulating a conjugate vaccine rather than on a standard component, thus speeding up development. Eliminating the capital, facilities, and maintenance costs by outsourcing a carrier protein drastically reduces overall cost of goods.

Using a third-party supplier can streamline the regulatory process. By doing so, a vaccine innovator can focus on CMC documentation efforts in its specific vaccine process, thus saving time and resources. Other advantages are obtainable by using an established supplier that already has CRM197ābased products that are clinically proven to minimize the need for multiple audits. In addition, it can also increase efficiency from a regulatory agency perspective, because fewer facilities need to be audited for carrier protein production. Outsourcing can also provide a more robust supply chain and a consistent product because CRM197 is produced through the same process for multiple products.

Access to sufficient quantities of CRM197, whether produced internally or outsourced, has been a significant issue for many manufacturers. Many vaccines for the developing world are sold to governments and nongovernmental organizations for prices at which the cost of manufacturing is often a significant percentage of a product’s selling price. Even if t
he high costs and long timelines involved in developing a CRM197 process do not prove to be barriers to entry, the operating costs of BSL-2 facilities are often not sustainable. Suppliers are continuously working to address those needs. By offering a seamless transition from reagent to CGMP-grade product, flexible scalability of supply, and supply chain security, outsourcing allows researchers to actively explore vaccines that previously would not have been possible or economically feasible.

With carrier proteins being essential to the growing vaccine development process, traditional research models that rely on vertical integration and internal development of carrier protein production technology should be reexamined. Instead, new approaches to partnering and outsourcing that leverage best available technology for a production of well-established carrier proteins should be investigated. An ability to rapidly translate novel conjugate vaccineābased product concepts into the clinic through such relationships and business models will help to strengthen the overall vaccine research industry, allowing ideas to be validated in a shorter time span. It will also allow for much more efficient use of company resources by focusing on core competencies and novel technologies.

One thought on “Carrier Protein Outsourcing”