Monoclonal antibodies are usually expressed in mammalian cell lines and are produced in several variants known as isoforms (1,–2).
Microheterogeneity can result from posttranslational and enzymatic modifications as well as those caused by processing, alteration, storage, and incorrect translation of the target protein (1,3). Common sources of heterogeneity include Fc glycosylation, partial carboxypeptidase processing of heavy-chain (HC) C-terminal lysine residues (4), deamidation or isomerization (5), Fc methionine oxidation, hinge-region fragmentation (6), aggregation, and sequence variants. Sequence variants are protein isoforms containing unexpected amino acid sequences. They are classified as “product-related impurities.” The presence of unexpected amino acids may pose concerns regarding bioactivity, stability, and immunogenicity (1,3).

WHO SHOULD READ: PROCESS AND PRODUCT DEVELOPMENT ENGINEERS AND ANALYTICAL LABORATORY PERSONNEL

Peptide mapping by mass spectrometry (MS) is a valuable tool for characterizing sequence variants, including single amino acid substitutions in protein variants. These modifications can introduce changes in molecular mass and fragmentation patterns in MS/MS spectra between a precursor (expected) peptide and the modified variant. Consequently, the specific amino acid modification can be identified and localized. To date, most published works on sequence variant characterization involve studies of model proteins such as hemoglobin (Hb) and κ-casein in academic research (9,10,11). In most cases, sequence variants were isolated and enriched to a high level for the convenience of characterization. 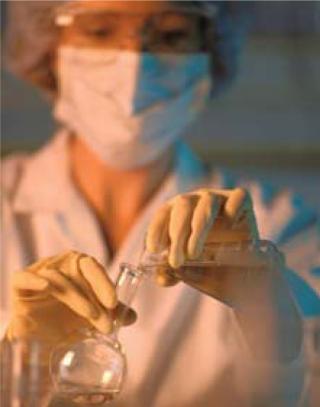 It is vital to select a clone that is suitable for early stage process development efforts leading to clinical manufacturing. Here we describe the development of a peptide mapping method using LC–MS/MS combined with Mascot ETS to evaluate variants containing amino acid substitutions for a monoclonal antibody. Visual comparison of the wild and variant-type tryptic map UV profiles did not detect the presence of sequence variants. However, when LC–MS/MS data were submitted for the Mascot ETS, a low level of sequence-variant S52G HC was identified and determined to be 0.2% at the peptide level in a lead clone.

Bioreactor Cultures and Antibody Purification: Before the bioreactor experiments, cells were maintained in shake-flask cultures using selective, MTX-containing medium. For the passage immediately preceding the bioreactor experiment, they were scaled up in one nonselective, MTX-free bioreactor passage. Fed-batch clone selection cultures were carried out for 14 days in 2-L sparged bioreactors from Applikon (www.applikon-bio.com). They were maintained at pH 7.0 using sodium carbonate and CO2, with dissolved oxygen maintained at 30% air saturation by sparging with air and O2. Initial culture temperature was 37 °C, with a shift to 33 °C at 48 hours after inoculation. We used a proprietary serum-free medium supplemented with protein hydrolysate, adding a nutrient feed on day 3. Glucose concentration was maintained above 3 g/L by glucose addition as needed.

Upon termination of the culture, the cell culture fluid was centrifuged for 10 minutes at 7,000 rpm, then sterile-filtered through a 0.2-µm polyethersulfone filter unit from Pall (www.pall.com). Then clarified culture fluid was loaded on a Prosep-vA high-capacity protein A column from Millipore (www.millipore.com) that had been equilibrated with 25 mM Tris, 25 mM NaCl, and 5 mM EDTA at pH 7.1. The column was washed with three column volumes of equilibration buffer, followed by three column volumes of 0.4 M potassium phosphate at pH 7.0, and then three column volumes of equilibration buffer. The antibody was eluted with 0.1 M acetic acid at pH 2.9 and neutralized to pH 5.0 by the addition of 1.5 M Tris base.

Trypsin Digestion: S-carboxy-methylation was conducted before digestion with trypsin: 1 mg of purified protein (e.
g., 50 µL at 20 mg/mL) was mixed with 20 µL of 1 M dithiothreitol from Sigma (www.sigmaaldrich.com) and 950 µL denaturing buffer (pH 8.6) containing 6 M guanidine hydrochloride, 360 mM Tris, and 2 mM EDTA, followed by an hour’s incubation at 37 °C. Then 50 µL of 1 M iodoacetic acid from Sigma, freshly prepared in 1 M NaOH, was added to the sample.

After a 15-min sample incubation at room temperature in the dark, the alkylation reaction was quenched by addition of 10 µL dithiothreitol. Reduced and S-carboxymethylated samples were exchanged using PD-10 columns containing Sephadex G-25 medium from GE Healthcare Bio-Sciences AB (www.gelifesciences.com) into a pH 8.2 buffer containing 25 mM Tris and 2 mM CaCl2.
MS-grade Trypsin from Promega (www.promega.com) was added at a ratio of ~1:50 (w/w) enzyme to protein. Digestion proceeded for five hours at 37 °C, then the reaction was quenched by addition of an aliquot of 10% (v/v) trifluoroacetic acid (TFA).

LC–MS/MS Analysis: We analyzed the protein digests using LC–MS/MS on a ThermoFinnigan LTQ instrument equipped with a standard electrospray ionization (ESI) source from Thermo Fisher Scientific (www.thermofisher.com). The system interfaced with an Agilent 1200 HPLC unit with an in-line UV detector from Agilent (www.agilent.com).

In data-dependent scan experiments, the instrument was set to conduct 11 scan events including a single MS scan followed by five repeated cycles of a zoom scan, then one MS/MS scan on the five most intense ions in the MS scan. We analyzed the data from our tandem MS experiments with ThermoFinnigan Xcalibur software (www.thermofinnigan.com). Separation was carried out on a 5-µm, 300 Å, 250 × 2-mm Jupiter C18 column from Phenomenex (www.phenomenex.com) at a flow rate of 0.25 mL/min, with mobile phases containing 0.1% TFA in H2O (solvent A) and 0.09% TFA in 90% MeCN (solvent B). Column temperature was set at 55 °C. A mixture of peptide sample corresponding to 5 µg of protein was loaded onto the column before injection.

Mascot Error Tolerant Search: Mascot by Matrix Science Inc. (www. matrixscience.com) is a search engine that uses MS data to identify proteins from primary sequence databases (19,20,21). MS/MS ion search of an LC–MS/MS dataset often reveals a number of spectra that remain unmatched. They are attributable to enzyme nonspecificity, unexpected chemical and posttranslational modifications, and peptide sequences that aren’t in the database. This can be addressed using Mascot ETS, which compares MS/MS data with a theoretical fragmentation pattern for each parent and all possible variations, including chemical and posttranslational modifications and amino acid substitutions (19). That allows detection of amino acid substitutions in a peptide (22,23,24,25).

MASCOT SEARCH PARAMETERS
The search parameters for both standard and ETS are described below:

Carboxymethyl was selected as the fixed modification.

Trypsin was the specified enzyme.

Maximum miscleavage site was set to 1.

Precursor peptide charge states were set at 2 and 3.

Mass tolerance was set to 800 ppm for both MS and MS/MS.

With additional manual ETS, the acquired LC–MS/MS data was submitted into Mascot. The first pass was a standard search against the entire in-house database consisting of ~150 entries of molecular sequences. Our second pass was a manual ETS that provides a comprehensive search for a selected protein hit, providing a wide range of possible variations, including posttranslational modifications (PTM) and amino acid substitutions. The “Mascot Search Parameters” box lists parameters for both standard and ETS.