Two years ago, the companies involved in the BioPhorum Operations Group (BPOG) fillâ€“finish community agreed that the quality of elastomer stoppers for vials was causing problems for biopharmaceutical manufacturers. So they deemed it to be a priority for the group. The problem is particularly pronounced for vial stoppers used in legacy products, which may have been on the market for several years. Many such medicines remain valuable for large patient populations. The stoppers used on legacy medicines are manufactured using formulations that do not benefit from modern developments and/or manufacturing methods. The cost of switching to more modern stoppers is perceived to be too high to be a viable option. Long lead times because of registration requirements in many markets create differing regulatory challenges. Stoppers used for legacy products are referred to herein as legacy stoppers.

The member companies formed a team â€śto identify the quality levels that participating organizations require in their stoppers and to collaborate with stopper manufacturers to identify opportunities for enhancing quality without the need for time-consuming and costly product registration.â€ť This team includes broad representation from across the biopharmaceutical industry with technical experts from 13 major companies in Europe and the United States. 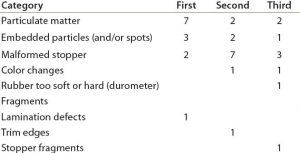 A survey of those companies helped determine the most frequent types of defects they experience with elastomer stoppers (Table 1). Particulate contamination was identified as the first or second most common defect experienced by nearly 70% of the participating organizations. That finding was supported in a recent report by the PDA, in which nearly two-thirds of 83 respondents identified primary packaging components as one of the top three sources of particulate contamination (1).

Using legacy stopper formulations can increase the risk for particulate contamination. â€śThatâ€™s the challenge,â€ť says Anna Sharda, former director of global sourcing and procurement for Baxalta US (now with Shire) and a member of BPOGâ€™s Stopper Quality workstream from its inception. â€śManufacturers are not in a position to switch stoppers with legacy products. That could take five to 10 years.â€ť Her group set an intermediate goal of developing a harmonized user-requirements specification (URS) for stoppers with an initial emphasis on particulate contamination, including explicit criteria for visible and subvisible particles.

The resulting URS reflects particle levels currently achieved by some manufacturers and thus is regarded by the team as achievable (Table 2). However, the team sees it as a medium- to long-term goal toward which end users and stopper manufacturers could work jointly to realize. The URS represents â€śthe tightest specifications agreed to across the board,â€ť Sharda says. Visible particles are deemed to be those â‰Ą100 Âµm in size. No distinction is made between extrinsic and intrinsic particles.â€ť

â€śWeâ€™ve had good success,â€ť she reports. â€śItâ€™s been a long journey, much more challenging than I anticipated because of the magnitude of whatâ€™s required and what needs to be done.â€ť With the URS in place, the team has focused on meeting face-to-face with suppliers to develop a plan of action for improving stopper quality. Several meetings already have taken place. The Stopper Quality workstreamÂ has formed supplier-dedicated teams to engage with vendors toward adoption of the URS, with a goal of having them align with its criteria, specifications, and quality control proposed. Representatives from the 13 companies have met with many suppliers to understand their particle reduction programs. Engagement has been positive.

One common issue highlighted by stopper manufacturers and end users as a potential barrier to improvement is the consistency of particle-counting methods and their ability to detect particles at required levels according to the current standard (2). But that standard is not universally adopted by stopper manufacturers or the biopharmaceutical industry. Those who have adopted it find the standard to be insufficiently sensitive to detect particles at the levels currently seen, let alone those required by the industry.

The challenge therefore is to develop a consistent particle-counting method that can be used reliably by end users and stopper manufacturers to make results from different organizations comparable. It must must be sensitive enough to detect particles at required levels while providing a means to track improvements. The BPOG Stopper Quality team will publish a white paper in 2017 highlighting the different methods used and areas where improvement is needed.

â€śAlthough success ultimately depends on gaining trust and commitment from suppliers,â€ť Sharda says, â€śBPOG has gained trust and credibility among many companies and provides us with a forum and a medium to connect with suppliers using one voice. This helps us ask them to meet our specifications. It helps them to meet matching requirements among companies with one set of specifications to work with. As with all successful collaborations, the advantages will be mutually beneficial. Suppliers have much to gain by working with the forum. They can gain business by being the ones to deliver what is wanted.â€ť

2 8871-3. Elastomeric Parts for Parenterals and for Devices for Pharmaceutical Use, Part 3: Determination of Released-Particle Count. International Organization for Standardization: Geneva, Switzerland, 2003.

Malcolm Gilmore is an account manager with the BioPhorum Operations Group; malcolm@biophorum.com.