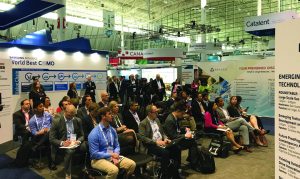 FloDesign is experimenting with applications of acoustics to cell-therapy manufacturing. An electric transducer is attached to a closed-flow system and generates forward propagating waves that are reflected as backward propagating waves. This sets up three-dimensional standing waves within the cell (flow) chamber. When cells enter the flow channel, acoustic forces cause then to cluster within the nodes of those standing waves, ultimately settling out through enhanced gravitational means.

Acoustic cell processing is scalable and reduces cost of goods (CoGs), consolidates and simplifies manufacturing, and maintains the high quality of products.

FloDesign is developing equipment for automation within a closed system, which will use modular disposables and an acoustic â€śengineâ€ť with integrated, automated fluid handling. The first system that will be released is a concentration/wash. The system works with Infinity beads for cell selection. It can be incorporated into many manufacturing steps. For example, in cell culture this system has two interesting applications: cell retention and as a bioreactor for autologous manufacturing. For cell retention, the waste stream is drawn off through the acoustic field while the cells are pushed down and retained. During the concentrate and wash step users can perform an expansion harvest and/or cell selection. The waves can separate cells based on size and density.

Grant feels that acoustic systems will provide significant cost savings for production because they enable closed, simplified, and automated systems. FloDesign is currently experimenting with its customers on 1-L scale concentrate and wash and an acoustic affinity cell selection (AACS) process. The company has developed prototypes for cell retention with a 5-L concentrate and wash and has a number of products undergoing proof-of-concept testing. The company also is fleshing out concepts on label-free cell selection, activation, transduction/transfection, suspended cell culture, and leukapheresis processing. Grant stated that an acoustic system is faster than other systems at removing volume while retaining 98% viability. He explained that AACS uses sonic forces instead of magnets. Positive affinity provides 83% recovery.

In 2017, FloDesign launched its first alpha prototype. The companyâ€™s hardware launch schedule is to introduce an integrated beta prototype this year (GMP disposables will be available for this machine), a commercial benchtop/modular system in 2019, and in 2020 an integrated process system. Then FloDesign will replace prototype units at customer sites with the final units. It is working on accelerating development and has already formulated partnerships for doing so. Currently, the company is looking for partners in developing some of its concepts. Grant says that it wants to develop sensors to go with this equipment.