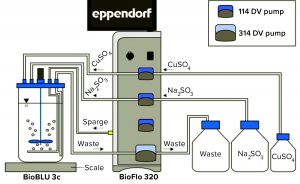 Proper tuning of dissolved oxygen (DO) controller proportional integral (PI) values is essential for optimal cell culture performance in a bioreactor. When DO-PI values are optimized, gas flows are smoothed, and foaming and cell stress are reduced. Traditionally, this tuning has been performed by using nitrogen gas to purge oxygen from a test solution, thus simulating oxygen demand. That method has several drawbacks, however. First, nitrogen gassing cannot simulate the high demands of high-density fermentation. Second, nitrogen competes with other gases, especially in single thermal mass-flow controller (TMFC) systems. The artificial gassing interference is not normally present in a cell culture. And third, nitrogen gassing cannot be used to test four-gas control mechanisms in which nitrogen is used to balance DO as part of the gassing strategy.

Controlling the concentration of sodium sulfite and its feed rate into a bioreactor can simulate the oxygen demands of a cell culture. Iteratively, different PI values are used for each run to determine the most effective settings. The BioFlo 320 bioreactor system from Eppendorf offers a simple way to perform PI tuning simulations. Operators can use a built-in time-profile feature with integrated pumps to control the amount of a sodium sulfite solution added to a reactor over time. Below we describe this method for simulating culture oxygen demand for PI tuning, using Chinese hamster ovary (CHO) cells as an example, although it easily can be applied to other cell lines.

Materials and Methods
A BioFlo 320 system was used as the controller for this protocol. Simulations were performed in an Eppendorf BioBLU 3c single-use vessel with a macrosparger. All solutions were connected to the vessel using AdvantaPure pump grade silicone tubing from NewAge Industries. In lieu of culture medium, simulations used phosphate-buffered saline (PBS) from Thermo Fisher Scientific.

Sodium sulfite was prepared as a 0.5 M solution by first sparging nitrogen gas at 0.5 standard liters per minute (SLPM) into 5 L of deionized water for a minimum of half an hour to purge DO. Next, 315 g of anhydrous sodium sulfite (Thermo Fisher Scientific) was added quickly and carefully to the deionized water. The resulting solution was mixed vigorously with a stir bar until the sodium sulfite was completely dissolved. To inhibit oxidization, nitrogen was sparged continually into the solution at 0.1 SLPM for the remainder of the experiment.

Experimental Setup: Figure 1 shows the experimental setup. The BioFlo 320 magnetic drive, thermometer, DO sensor, and heat blanket were connected to the BioBLU 3c bioreactor following instructions in the operatorâ€™s manual. A pH sensor was inserted into spare port 1, and the vessel was placed on a scale. After a zero-point and span calibration, the vessel was filled with 3 L of PBS. The BioFlo 320 loops were configured using parameters listed in Table 1. 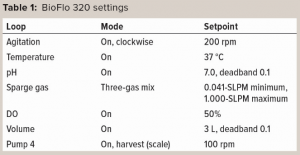 Time Profile Setup: Addition of sodium sulfite into the reaction vessel was controlled through the BioFlo 320 time profile. A simulated oxygen demand profile was created based on the increased oxygen demand over time observed during past CHO cultures. The simulated culture time was sped up by a factor of 10 so that a typical batch culture process of seven to 10 days was condensed into a one-day simulation. When the simulation was complete, data were exported from the BioFlo 320 systemâ€™s trend screen for analysis. 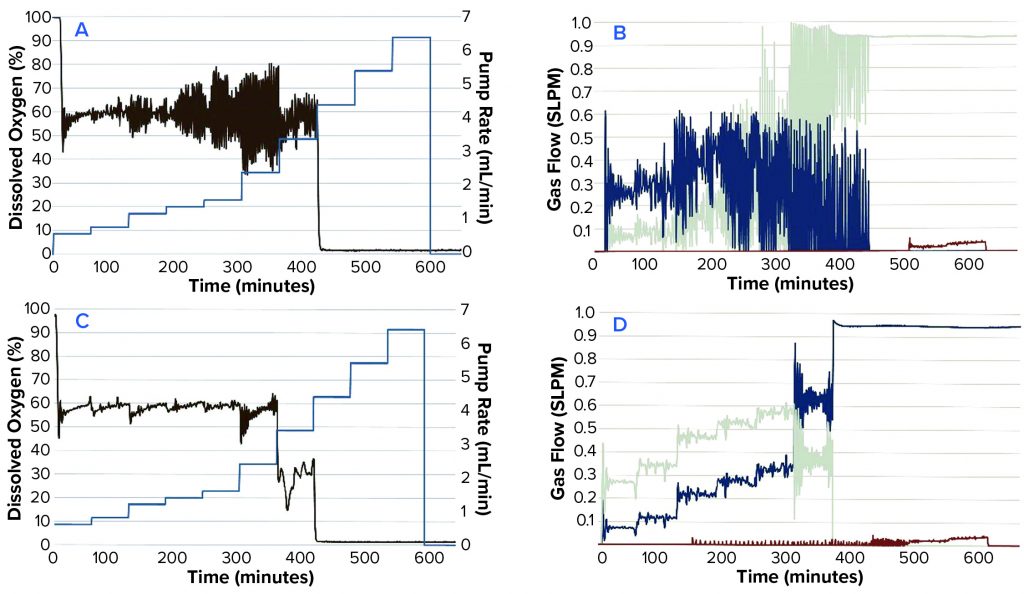 Step functions used in the time profile approximated the oxygen demands of an actual CHO culture. This method allowed us to simulate such demands sufficiently well to test different PI values efficiently. The basic PI tuning method does not require additional software or programming experience. In our CHO-cell batch culture example, values of P = 2 and I = 0.09 were found to be most effective. Those values reduced DO fluctuations around the setpoint and minimized fluctuations in gas flow.

To learn more about this method, visit https://www.eppendorf.com/bioprocess or contact us directly. Our experts will be happy to answer your questions.

John Longsworth is a senior applications engineer, Nina Schillings is an intern, and Ma Sha is head of the applications laboratory at Eppendorf Bioprocess Center in Enfield, CT; bioprocess-experts@eppendorf.com.