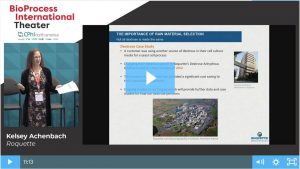 Roquette is a family-owned French company with more than 20 manufacturing facilities and a presence in more than 100 countries. For small-molecule pharmaceuticals, it offers a broad range of excipients; for large molecules, it offers ingredients both for cell culture and protein stabilization. The company has more than 300 people in its R&D workforce who focus on understanding the science behind their materials. Achenbachâ€™s goal was to initiate a conversation between raw material suppliers and biopharmaceutical manufacturers and to build an understanding of the effect of raw materials on bioprocessing.

By now, monoclonal antibodies (MAbs) are a well-established industry, she said, but the landscape is changing. In 2018, more than 150 investigational new drug (IND) applications were submitted to the US Food and Drug Administrationâ€™s Center for Biologics Evaluation and Research (FDA-CBER) for cell and gene therapies. Thatâ€™s the next generation, Achenbach said, but what does it mean for raw material suppliers? One key to the success of MAbs has been the industryâ€™s ability to develop robust manufacturing processes. It took a long time to get here, she said, and now is the time to focus on optimization processes: how to improve yields and lower the costs of production.
When working toward improving yields, the focus is on expression titer. The average titer has increased significantly over the years. In the 1980s, it was <0.5 g/L; now the average is >5 g/L. Much of that can be attributed to process optimization, but Achenbach said thatâ€™s not the whole story. â€śYouâ€™re taking a cell, putting it into an alien environment (a bioreactor), and various things can happen to that cell that can affect its ability to multiply. A lot of work has gone into molecular, environmental, and media design.â€ť

Achenbach pointed out that not enough has been done to focus on raw materials that go into the media. She believes that the industry needs greater comprehension of the role that raw materials play in media selection, and she presented a recent example: Roquette manufactures dextrose and was working with a customer seeking to change its supplier. After changing over to Roquette, the client achieved a 20% increase in titer, which was significant and surprising. In comparing Roquetteâ€™s dextrose with the competitorâ€™s dextrose, they found that the certificates of analysis (CoAs) looked exactly the same.
â€śYou would think dextrose is dextrose,â€ť Achenbach commented. â€śHowever, thatâ€™s not the case.â€ť Now her company is working with the customer to determine why that titer increase happened. It could be attributable to a number of things â€” e.g., impurity profiles, heavy metals, or dextrose purification processes.

Roquetteâ€™s goal, she said, is to push thought processes and initiate discussions. â€śHow do we collaborate more as raw material suppliers and biopharmaceutical manufacturers to better understand these kinds of influences of raw materials, even if conditions look the same side by side?â€ť

Through a collaborative effort in 2008â€“2009, a chemistry, manufacturing, and controls (CMC) study was conducted in which a number of large biopharmaceutical companies created a roadmap for what quality by design (QbD) would look like for biopharmaceuticals. The â€śA-MAb Case Studyâ€ť focused on process development and understanding process parameters, but limited consideration was given to raw materials â€” most of that based on prior knowledge.

â€śWhat if that prior knowledge doesnâ€™t exist?â€ť Achenbach asked. â€śThereâ€™s still much work to be done on how changes in raw materials can affect each parameter of the process, and relying on prior knowledge doesnâ€™t make sense. We need to understand how these different products affect cells. Raw materials suppliers and biopharmaceutical manufacturers need to investigate this further.â€ť