In the quest for improved quality and productivity in drug manufacturing, the industry is moving toward increasing use of bioreactor systems with real-time integrated monitoring and advanced analytics that can enable automation, drive performance, and improve data-rich quality control. However, there are multiple options for sensors and technologies that monitor important cell-culture variables or critical process parameters (CPPs). Furthermore, cell culture vessels can be disposable single-use bioreactors (SUB) or reusable glass or stainless-steel models. They can operate in stirred tanks, with rocking platforms (bags), or in perfusion configurations. The sensors and monitoring technologies selected for these configurations must be suitably designed and compatible with the bioreactor architecture. When properly selected, the process analytical technologies (PAT) not only provide analytical insights into ongoing bioprocesses, but can be leveraged for real-time control and automation, especially in fed-batch or continuous cultures.

Automation is a key trend driving improvements in manufacturing, especially for biopharmaceutical production. One big challenge is the integration of systems for effective automation. In-line sensors in mammalian cell culture can be used to monitor biomass production, key media nutrients, or metabolism indicators. Spectrophotometric techniques such as near-infrared (NIR) and Raman technology are used to quantitate and correlate spectroscopic data with precise chemical signatures. As a result, monitoring of glucose concentrations and lactate in real time is becoming more common, reducing the need for off-line analysis and enabling the automated delivery of media supplements as required.

PAT Integration and Data Alignment
Researchers frequently debate the relative capabilities of Raman and Fourier-Transform (FT)-NIR for spectroscopic applications in cell culture. The ability to identify and differentiate cell culture media components spectroscopically is affected primarily by considerations of bandwidth, sensitivity, interference, and software. And the latter (software) is quite capable of having a sizable impact on the other three parameters as described in the examples below.

For instance, in bioreactor culture, two issues frequently cited and considered to be limitations of FT-NIR include baseline data variation from cell-densityŌĆōdependent optical scattering and interference by water in glucose detection. We addressed the first concern largely by digital-noiseŌĆōsuppression software improvements. The second issue of signal interference by water or other molecules overlapping with glucose bond absorption profiles was reduced by the proper selection and integration of multiple-wavelength microscan data to provide a more specific footprint of reliable molecule-specific bond signatures. Both of those NIR limitations were thus overcome by innovative data use and novel software approaches. Consequently, the determination of glucose concentration in cell culture media with FT-NIR now can be robustly correlated with actual reference concentrations or off-line cell culture glucose measurements using benchtop chemical analyzers.

Derivation of cell models and proper selection of microscan data for a particular cell line and cell culture medium are fairly complex tasks requiring significant time and effort to achieve the proper calibration. And although a universal cell model for any expression system would seem to be ideal, it is not an effective, viable option. To that end, we settled on precondition and calibration approaches to simplify alignment of NIR data with user-specific cells and media. The precondition is to focus on a specific cell type to minimize deviations from a standard model. The calibration approach leverages a baseline calibration curve to provide a suitable starting point for subsequent user-dataŌĆōderived refinements.

By limiting the developed FT-NIR application to Chinese hamster ovary (CHO) cells specifically, we were able to derive an effective laptop software tool that uses a ŌĆ£data-drivenŌĆØ model-refinement algorithm. The tool enables custom calibration of FT-NIR data to any CHO-cell-based user expression system by smartly adjusting spectroscopic microscan data. We know that by starting with the preset baseline calibration algorithm and performing only three consecutive bioreactor runs, we can gather enough user data to construct a precise custom cell model. By using this overall approach and the final cell model, NIR spectroscopic monitoring can provide highly accurate glucose and lactate concentration sensing in real-time specific to the user cell line and culture medium.

For some purposes, simple monitoring of CPPs such as glucose and lactate can provide significant value for production and quality control. However, that approach also can be coupled with intelligent bioreactor software systems to enable automated feeding of glucose for maintaining constant concentrations or dynamic control. More is discussed about this below.

In-line biomass measurement is an important PAT for understanding the culture growth phase and cell viability in bioreactors in real-time. Sometimes referred to as biocapacitance probes, electrical impedance sensors monitor cumulative charge polarization across intact plasma membranes to estimate total live-cell biomass. This technology has been widely adopted in the biopharmaceutical industry as a method for calibrating viable cell density (VCD) in real time. Like many users, we had encountered issues with adopting this technology, including reliability issues at higher cell densities and interference from some media components. However, we have innovated around those issues in several ways. First, a thorough investigation of the cell physical size and growth dynamics (in suspension) during the cell culture timeline enabled us to relate biomass data to proper cell counts. That critical information was collected by using a well-known immortalized strain of CHO cells. Second, electrical impedance data were selected at multiple frequencies to overcome some types of interference from media components or other factors. And third, we derived growth-phaseŌĆōspecific data conversion algorithms that recognize transitions and switch or compensate (as appropriate) in the cell culture timeline. For instance, we have found that calculation of VCD using biocapacitance data from early and exponential growth-phase culture can be used to derive an algorithm that provides high reliability specific to those earlier growth phases. However, that algorithm becomes a poor predictor of actual VCD in stationary or later stage cultures. That is likely attributable to changes in cell morphology that are reflected in later stage culture perhaps due to physiological shifts and changing protein expression profiles. It has been shown that in recombinant cell lines, the biologic expression of monoclonal antibodies is generally induced to higher levels when cultures achieve peak cell densities. In bioreactor culture, as CHO cells approach peak cell densities, glycolytic pathways transition to a more oxidative phosphorylation metabolism. So cell sizes and membrane composition may change.

These events appear to result in a deviation from the calibration parameters applied for determination of VCD in early stages of culture. Hence, an entirely different data correlation model seems to be appropriate once cultures reach the peak VCD. By integrating and switching from early stage to late-stage models at the appropriate time, generation of accurate VCD data from biocapacitance measurements can be achieved with appropriate CHO cell models. With this approach, biocapacitance can provide high accuracy in calculation of VCD data throughout the entire bioreactor run, including up to 100 ├Ś 106 cells/mL in cell culture. 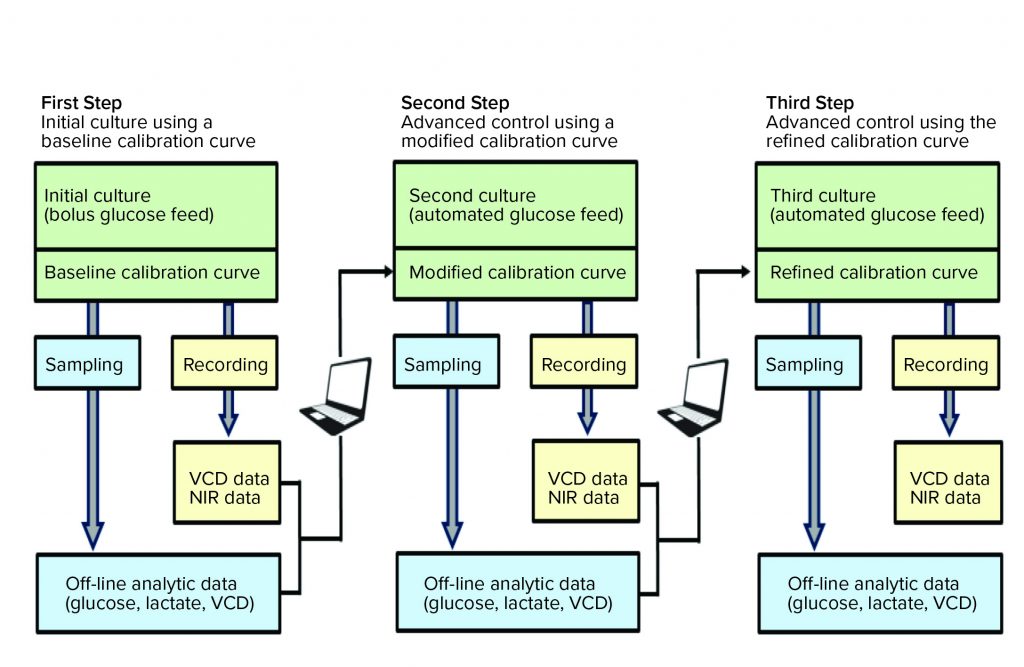 Model Predictive Control
As mentioned earlier, the use of in-line PAT for real-time process control (PC) is an automation approach that has potential benefits for biotherapeutic drug manufacturing. A key example is to automate feed-control of nutrients in fed-batch culture. Spectroscopic technology for monitoring nutrient concentrations is limited in ways discussed earlier. However, it is universally agreed that glucose concentration is one CPP that has a direct impact on manufacturing performance. Hence, production cell lines usually are well characterized regarding glucose sensitivities and optimal concentration requirements for growth in bioreactor cell culture. Glucose concentrations have been shown to influence the metabolic state and growth rate of cells in culture, in addition to the expression yields and posttranslational modification of recombinantly produced biologic drugs.

To control glucose concentration in bioreactors in real time with PAT, both accurate detection and feeding strategies are important for process control. PC considerations are obviously not unique to biopharmaceutical production, but rather, they have been widely studied and used in many other industries such as chemical plants and oil refineries since the 1980s. Early strategies, especially in the chemical industry, used proportional-integralŌĆōderivative (PID) control, largely dependent on feedback mechanisms. Such PID-based methods work primarily through input sensing and rapid reiterative feedback adjustment cycles. However, in bioprocess, in-line sensor data collection is slower, and living systems take longer times to adjust and equilibrate to environmental or process changes. Hence, the effectiveness of new prediction-based approaches can exceed that of traditional reactive feedback approaches. For bioprocess development, we believe that PID-methods will increasingly be supplanted by more sophisticated feed-forward predictive control strategies requiring defined constraints factored into decision outcomes.

We have developed an intelligent CHO MPC algorithm for glucose-feed control that accommodates multiple constraints including VCD, growth phase, future-state, current concentration, feed-volume dilution factors, and self-correction based on differences between measured and predicted data values. PAT-driven use of this data-adaptive MPC for automated delivery of glucose by peristaltic pump action has been shown to provide precision control of glucose in fed-batch bioreactor culture, even with low glucose concentration ranges such as 1 g/L. With flexible programming features, the dynamic regulation of glucose in a single bioreactor run can be implemented, enabling growth-phaseŌĆōspecific concentration control, among other unique applications. The effects of this strategy for bioproduction have largely been unexplored due mainly to prior limitations in precision control of glucose concentrations during cell culture. 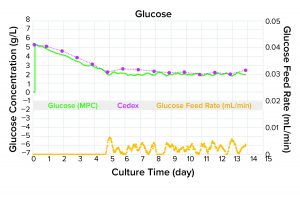 Figure 2:ŌĆéPrecision control of glucose and alignment with off-line analytical data; use of the refined calibration curve with model-predictive control (MPC) software results in strong alignment of glucose concentrations in fed-batch culture. DG44 CHO cells were seeded at 5 ├Ś 105 cells/mL in FortiCHO medium (Thermo Fisher) containing 5 g/L glucose. Cells were cultured for 14 days with a set-point concentration of 2 g/L glucose. The delivery of glucose feed solution (450 g/L) was automated by peristaltic pump action.

Accurate and Efficient Glucose Control
Integration and calibration of all these technologies and related software requires expertise in cell culture, model building, spectroscopy, programming, and data integration. Hence, it is less common for resource-constrained organizations to explore sophisticated in-line bioreactor automation and process control technologies for biopharmaceutical production. Piecemeal assembly of many components usually from many independent suppliers and software integrations is a challenging and time-consuming task.

We have addressed these obstacles by creating a novel and fully-integrated bioreactor system that we call the BR1000 bioreactor system, with unique software for operation and calibration (see opening photo). To maintain strong utility and precision in PAT sensor data but still allow customized use for CHO cell culture, the BR1000 system contains programming with a significant degree of CHO-cellŌĆōapplication bias. Use of other cell lines or significantly divergent media compositions are likely not going to perform optimally because of that built-in bias. However, for applications with CHO-cell culture, we have designed our system to offer the most accurate and efficient glucose-control, laboratory-scale technology platform for recombinant monoclonal antibody process development. We are working on next-generation glucose-sensing PAT control systems that provide similar process control benefits to CHO cell culture and automation for pilot- and manufacturing-scale bioproduction.