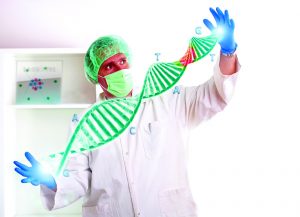 Pierre-Alain Girod is chief scientific officer (CSO) for Selexis SA. He holds a PhD in plant biochemistry from the University of Lausanne in Switzerland and completed a postdoctoral fellowship at the University of Wisconsin in Madison, WI, on the degradation of proteins by the ubiquitin pathway. Girod returned to Switzerland in 1993, where he discovered a family of sequences that are involved in the epigenetic regulation of genes. That discovery subsequently has been used to express therapeutic proteins in the biopharmaceutical industry. Girod has been CSO at Selexis since 2006. We chatted in March 2021 about his companyâ€™s work with Chinese hamster ovary (CHO) cells and other expression systems.

Our Conversation
Cell-line engineering has advanced dramatically over the past decade, with new promoters and instrumentation transforming workflows. What have been your experiences/successes in this area? The pipeline of clinical candidates developed with our technologies has advanced rapidly over the past decade. Having contributed to development of nearly 140 drug candidates (68 of which are in human clinical trials) and eight marketed products, Selexis has achieved great success by continually evolving its technologies and operations.

Technology: We use optimized vectors composed of strong constitutive regulatory elements. We improved our technology platform in two primary ways:

Operations: Operational workflows have been redefined to offer solutions early in cell line development with bias toward predictable and successful expression of different scaffolds, including difficult-to-express proteins. Isolation of high-producing cell lines no longer is based on productivity alone, but also includes early assessment of quality attributes.

CHO cell lines are the most common expression system used for biopharmaceutical production. The benefits of using them are thus widely understood. What are some drawbacks? And what kinds of improvements are addressing those problems? Initially, CHO cells were used in research for their good biomechanical properties â€” they are easy to grow, with high transfectability â€” and subsequently were applied in the biopharmaceutical industry for protein production. Development of media and culture conditions over time has sustained continuous enhancement of CHO productivity. Product quality has benefitted from those improvements, but nutrient optimization has reached its limit. Improvement of cellular metabolism is the next path to explore. However, plethoric intellectual property (IP) on the CHO cell â€ś-omicsâ€ť is restraining engineers from improving their cellular physiology.

Note too that CHO cells are susceptible to genome remodeling under cultivation conditions. Robust CHO cell lines such as the Selexis CHO-M cell line do show less variation of high-level genomic structures (such as chromosomes) from karyotyping cells. Detection of genetic variants such as single-nucleotide variants (SNVs) by querying the whole genome with next-generation sequencing (NGS) offers new perspective in the definition of monoclonality for cell populations. Highly innovative bioinformatics tools are used to classify mutations as â€śtrunksâ€ť to distinguish variants cells from the normal population.

Host-cell proteins (HCPs) and nucleic acids are common process-related impurities. The long history of CHO cell culture gives it a somewhat familiar HCP profile and well-documented genome. Does this present a hurdle for less-familiar expression systems? HCP profiles are product specific. Stress imposed by expression of a recombinant protein induces protective cellular pathways, and HCPs are representative of that stress. Optimization of the environment (e.g., culture conditions and media additives) can have a beneficial impact on cell fitness.

Expressing products in different hosts also can be a solution to HCP problems. For less-familiar expression systems, we can expect the burden of HCP characterization to present a hurdle for adoption that would have to be weighed against other performance attributes such as expression titers and product quality.

Potential CHO alternatives â€” many used extensively in research â€” run the gamut from prokaryotic and eukaryotic microbes to plant and insect cells to different mammalian systems and even transgenics. Which do you think have the most potential for the future of the biotherapeutics industry, and why? Over the past two decades, culture conditions have been optimized extensively to confer unmatched cell-specific productivity on mammalian-cell expression systems. By contrast, lower eukaryotes can be grown to higher biomass and on simpler media. However, more efficient protein synthesis machinery makes mammalian cells a more suitable host for complex molecule production.

Human embryonic kidney (HEK) cells have the highest potential as a CHO alternative. Indeed, they have been left out but will benefit from developing culture conditions just as CHO cells have done. New and improved media will provide HEK cells with CHO-like performance but with the added advantage of producing humanized recombinant products.

Low expression titers continue to plague developers of gene therapies. How are companies tackling this challenge? Expression-vector design and targeted integration are aspects to improve helper-gene expression, but they also require improvement in the cargos used to deliver genes.

What makes some proteins â€śdifficult to express,â€ť and how do companies solve that problem? Titer is product dependent. Clearly, cells can produce some proteins â€śseamlessly,â€ť whereas other expression products have longer residency and perturb cell growth. The latter products can induce repair pathways that use up important cell resources. A whole cellâ€™s metabolism thus will be affected, ultimately resulting in cell death and release of HCPs. Culture conditions (e.g., perfusion) and cell engineering provide solutions. Using alternative hosts is now becoming more routine.

Selexis has engineered a panel of libraries that overexpress â€śhelperâ€ť proteins to assist in the translational and secretory pathways of our proprietary CHO cell line. These libraries have resolved expression bottlenecks that otherwise limit production of difficult-to-express proteins.

Beyond such cell-line engineering solutions, we have redefined our workflows to offer solutions early in cell line development that assist in predictable and successful expression of different protein scaffolds. Isolation of high-producing cell lines includes early assessment of quality attributes.