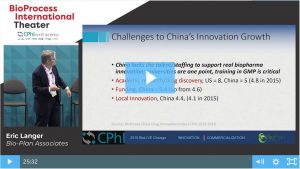 China is a probable center of concentration for the next generation of biotechnology. However, Langer believes that the country will fail in its goal of achieving that if it cannot innovate. He said that forecasters need to understand the complex elements associated with development of biotechnology centers other than those for biogenerics and biosimilars. How is China going to develop the necessary innovation capability? Driving the industry are the 7,500 cancer deaths every day in China as well as the 12,000 people there who are diagnosed with cancer each day.

Langer said that his group has a lot of data, having developed numerous studies and examined the trends. But the reality is that 290 million Chinese citizens have cardiovascular disease but no access to Western medicines for it. This is important now, he said, because this year China topped the United States as the main global retail market. The countryâ€™s middle class is growing faster than that in the United States as well. How does that relate to healthcare and biotechnology? Millions of people make up Chinaâ€™s middle class, and they have disposable income. When a family member has a disease or illness, middle-class people can spend that disposable income on healthcare. This growing class has access to available drugs that it didnâ€™t have 10 years ago.

China has moved into high technology and highly regulated environments. Biologics will be next in line. There are 153 biomanufacturing facilities in the country right now, but experts wonder which of those will succeed â€” and what will cause the shift toward innovation. Chinaâ€™s biopharmaceutical future must be in current good manufacturing practices (CGMPs) and not just â€śbiogenericâ€ť products. From a recent survey, Langer noted that 28% of Chinese biopharmaceutical companies identified that they were looking to the global market. The mindset in China is turning westward, he asked, but how will they get there?
Categorically, China perceives itself as the biogeneric manufacturer for the world. But those margins donâ€™t allow for innovation. Small profits cannot be reinvested to support the next generation of innovative products.

Over the past five years, the country has started to make significant investments in innovation. Overall R&D expenditures are 2.15% of Chinaâ€™s GDP (higher than in Europe), and they are expected to hit US$260 billion soon â€” up 71% since 2012. â€śConsidering that trend, how much will happen in the next 5â€“10 years? How will Chinaâ€™s innovation spending convert to commercialized products?â€ť Although movement toward an innovation mindset continues, Langer added, the country lacks the significant talent/staffing to support real biotechnology innovation. â€śTraining and on-the-job experience are critical, and opportunities abound, but how long will it take to develop innovative products and processes?â€ť

Small to midsized companies rely on the expertise of contract manufacturing organizations (CMOs) to help them figure out how to manufacture their product. In China, the regulatory environment for outsourcing biologic manufacturing at commercial scale has been changing rapidly. Now the country is considered to be an outsourcing destination for the United States. Nearly a third (30%) of the US bioprocessing community reports a strong likelihood that in five years they will be exporting something to China or sending some outsourcing (either process development or fillâ€“finish) to China. â€śWhat weâ€™re seeing is essentially an evolutionary shift in how the industry perceives China and its manufacturing quality.â€ť

There are still many questions to address as the industry moves forward. China has one-fifth of the worldâ€™s population, with a growing middle class and people dying by the thousands of diseases that could be cured. It remains to be seen how biomanufacturers, suppliers, and regulators in more developed regions will participate as part of that growth..