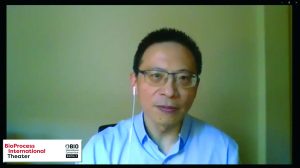 The first case study explored causes of patient sensitivity and resistance to pomalidomide, a treatment for multiple myeloma that targets the E3-ligase protein cereblon. CangŌĆÖs team wanted to improve administration of the drug and to identify predictive biomarkers for its efficacy. Researchers introduced a whole-genome library to pancreatic cancer cells, challenged those with a G2/M cell-cycle checkpoint inhibitor at a lethal dose, and harvested them at different time points. After next-generation sequencing (NGS) using three guides for selection markers, CangŌĆÖs team located 17 genes that were inactivated by synthetic lethality. All are implicated in regulating actin filaments and cytokinesis. Researchers also found that three of the six encoding enzymes relate to heme biosynthesis, suggesting a heme-regulated pathway in mediating drug sensitivity.

Knowing that cancer cells must mutate to prevent immune-system detection, CangŌĆÖs team applied CRISPR library screening to identify changes that desensitize cancer cells to immune-checkpoint blockers. The team performed in vivo screening using xenograft models. That required a different approach from what was taken in the first case study because whole-genome libraries do not provide sufficient guide coverage for in vivo assays. CangŌĆÖs team generated a custom CRISPR library consisting of 2,000 guides targeting 200 genes that have been identified as highly mutated in cancer genomes. Researchers introduced those libraries to MC-38 murine colorectal adenocarcinoma cells and implanted them into mice. After tumorigenesis occurred, the team treated specimens with PD-1 immune-checkpoint blockers, then harvested genomic DNA from the tumors and amplified it for NGS.

Results revealed the deletion of genes that encode for parts of the switch/sucrose nonfermentable (SWI/SNF) complex, which regulates chromatin access and DNA packaging. The pbrn1 and kmt2d genes are known to be highly mutated in the cells of renal cancer and Kabuki syndrome patients, respectively. These parts of the SWI/SNF complex also tend to respond well to immune-checkpoint therapies. Cang and his team performed in-vivo competition assays that knocked the kmt2d gene out of cancer cells. Preliminary findings suggest that the kmt2d gene facilitated PD-1 induced killing but at the cost of increased growth among the knockout cells.

Analysts can select all-in-one and two-vector systems to deliver library material to cells. WuXi offers both and has learned that targeting efficiency is not significantly different between the two methods. Despite analystsŌĆÖ best efforts, some cell lines resist screening. WuXi has constructed a detailed list of specifications for seven cell lines to help analysts determine which cells will perform most effectively in their screenings.

Sufficient coverage in library guides is critical to successful interpretation of resulting data. Analysts should ensure that recounts are distributed evenly across all samples and also should consider the incidence of zero counts to help identify and exclude outliers from final analysis. A balanced Gini index reading can confirm that known targeting guides are well-represented in samples. Nonessential genes and positive controls can fine-tune initial analyses of targets.

Cang emphasized that CRISPR library screening ŌĆ£is a start of efforts to identify targets.ŌĆØ Once a target is identified, WuXi scientists can engineer cell lines and animal models to investigate its biology and determine whether it will provide a therapeutic approach.