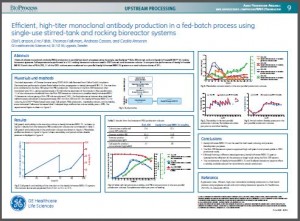 This poster presents a study on the performance of two types of single-use in an antibody fed-batch process. The bioreactors were the stirred tank Xcellerexâ„¢ XDR-200 bioreactor and the rocking ReadyToProcess WAVEâ„¢ 25 bioreactor system. The cell line used was a CHO-DG44 derived antibodyâ€‘producing cell line and the base medium and feeds were from the ActiCHOâ„¢ media platform.

The results from the parallel cultures presented in figures 3,4 and 5 show that cell growth, productivity and metabolism were very similar. Maximum viable cell concentration was approximately 23 million cells per milliliter in both bioreactors and final product concentrations at harvest, 13 days post inoculation, was approximately 5 g/L. The similar performance can be seen in the physio-chemical parameters such as the dissolved carbon dioxide profile (Figure 6) and the similar profiles of the fed nutrients and metabolites (Figure 5).