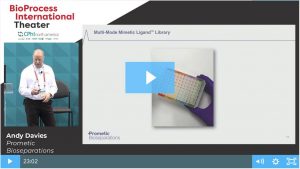 Davies began his presentation with a few words about his company, which for the past 30 years has provided a range of bioseparations products, including off-the-shelf and bespoke solutions. Prometic Bioseparations recently launched a number of semidisposable and disposable, prepacked, GMP-ready columns. The latest launch is a multimode mimetic (MMM) ligand library, which was the
focus of his talk.

Just a few years ago, traditional downstream bioprocessing was a matter of linking those different techniques sequentially to achieve final purity of an end product. This was effective enough, but it could be a lengthy and costly process. In addition, yields could be low because so many steps were involved. What weâ€™re seeing now, Davies explained, is a more modern approach with a very effective initial capture step (typically using affinity chromatography) that completes the bulk of the purification needed. Some purity levels can be >90% just from a single affinity step. That simplifies the rest of the process to one or two polishing steps to remove trace levels of contaminants that might remain.

Scientists also are beginning to adopt flow-through purification in which a target protein passes through a column that captures contaminants and/or impurities. The popularity of multimode ligands has grown in the past few years because they are extremely useful for flow-through polishing. One thing to note about them is that users must optimize both the binding and elution conditions with current multimode ligands to find a particular target or contaminant by adjusting pH, salt concentration, or solution polarity. Davies explained that doing so can require sepnding a lot of time in optimizing the separation and trying to fit samples to working conditions that suit the ligands for binding.

His company is trying to change that. Rather than optimizing samples to bind to ligands, Prometic Bioseparations wants to create a range of ligands that will bind to samples in their native condition without adjustment. So the company created a diverse multimode ligand library consisting of 96 different affinity or multimode ligands attached to an agarose base matrix through a spacer arm. A number of different ligands are used: anionic and cationic, aliphatic and aromatic, hydrophobic and hydrophilic.

The easy-to-use multimode ligand library is arranged in a classic 8 Ă— 12 array. Screening can be complete within one to two hours, after which a user quickly learns which ligands to focus on for further development. There is no need for complex or liquid-handling equipment; all that is required is a simple multimode pipette. Gravity controls the flow, with no need for vacuum or centrifugation of the plate. The free flow of gravity gives a residence time of about two minutes, providing sufficient time for interactions between the ligands and a molecule of interest. Davies presented an example of the use of this plate with a typical monoclonal antibody in a Chinese hamster ovary (CHO) cell feedstock.

By using a diverse ligand library, Davies concluded that a company can optimize separations in flow-through mode without needing to modify the sample feedstock itself. The multimode ligand library enables users to capture problem impurities directly from source material without adjustment. â€śWeâ€™ve changed the paradigm,â€ť he said, â€śoptimizing the sample to bind to the ligand to actually create a diverse library, allowing you to bind without making a change in conditions. Once youâ€™ve found a ligand that works, we can provide larger volumes of the resin.â€ť