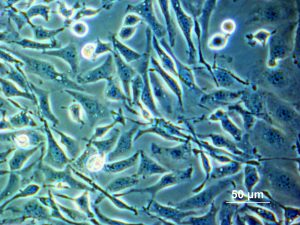 In April 2020, Samsung Biologics hosted a webinar with John Gill, the companyŌĆÖs director of cell-line development (CLD). He focused first on chemistry, manufacturing, and controls (CMC) activities needed for preparing an investigational new drug (IND) application. Then he introduced a fast timeline for managing CLD programs to accelerate client projects to success.

CMC Activities
Samsung Biologics is a fully integrated contract development and manufacturing organization (CDMO). Starting with a clientŌĆÖs gene of interest (GoI), GillŌĆÖs group tailors CLD to the product quality attributes (PQAs). Research cell banks are transitioned to a master cell bank for characterization and release in parallel with upstream, downstream, formulation, and analytical method development. The resulting process makes materials for toxicology and stability testing of both drug substance (DS) and drug product (DP). Current good manufacturing practice (CGMP) manufacturing follows. The timeline for an immunoglobulin G (IgG) monoclonal antibody (MAb) is about 10.5 months from CLD to DP manufacturing. For properly maintained programs, many activities can be initiated early in the CLD program.

The Beacon system uses optoelectoral positioning to isolate and characterize individual single cells. This fully automated system can screen nearly 7,000 cells for specific productivity and growth rate, with efficient down-selection of unstable clones. It can document >99% monoclonality with a visual record.

SamsungŌĆÖs CHO-K1 GS knockout cell line offers expression titers >11 g/L of cell culture. CLD takes about three months (13 weeks) to go from expression vector to a top-five pool. It begins with screening on the Beacon system, then moves to deep-well plates for screening 24ŌĆō96 clones. Finally the CLD group uses a Sartorius ambr 15 microbioreactor to rank the top 10 clones (with client input) for PQAs and product titer, cell growth and viability, robustness, and manufacturability. The resulting 25ŌĆō30 vials of cells can be used to start both upstream process development and cell-bank stability and characterization studies. Media adaptation work brings the top 10 down to five.

Media Adaptation and Subclone Selection: In a case study changing from HyClone CD CHO media (Thermo Fisher Scientific) to MerckŌĆÖs Ex-Cell CHO chemically defined fusion media, Gill showed that doubling time and growth in shake flasks were similar to those from the initial passage. ŌĆ£WeŌĆÖre just repeating passaging to make sure that we have a firm grasp on the doubling time and the repeatability from passage to passage,ŌĆØ he said. His team used a six-day fed-batch process in 25-mL shake flasks and measured peak viable cell density (VCD). The end outcome was a top-five selection with doubling times of 18ŌĆō21 hours and peak VCD of 7ŌĆō8 ├Ś 106 cells/mL, ŌĆ£which is a good start to any manufacturing process.ŌĆØ

Next, the team determined the IgG1 antibody expression of those five best subclones. Here they incorporated the Octet platform from Fort├®Bio (now part of Sartorius Stedim Biotech) into the process for titer and glycan screening. Gill pointed out that ŌĆ£the expression vector here is just a [cytomegalovirus] CMV-driven GS selection with no special modifications made to the plasmid map.ŌĆØ

Two of the candidates were high expressors already. ŌĆ£We took the top 10% of these pools for the later stable-pool scale-up.ŌĆØ At the end of that culture, they were producing at the levels of 3.6 and 5.7 g/L. ŌĆ£If you have titers like this very early in your stable-pool stage,ŌĆØ Gill continued, ŌĆ£it allows your process development to initiate much earlier.

These minipools with only five or so colonies can be very predictive or representative of what you might see later in screening your final clones in an upstream process.ŌĆØ
Next, the CLD group used a Cytena single-cell printer and a Cell Metric imaging system from Solentim to isolate clones from the highest-expressing minipools. Performance results from testing two of them against a CHO control (before isolation of individual cells) showed improvements in both VCD and percent viability. ŌĆ£This is where the host cell line we isolated and developed really stands out.ŌĆØ

Both viability and VCD decreased in the control cells ŌĆ£as early as day nine and certainly by day 11.ŌĆØ One minipool showed ŌĆ£reasonable maintenance of VCD in the 20ŌĆō25 million cells/mL range, but a drop- off in viability.ŌĆØ However, the best minipool maintained both well, with strong adherence to a peak VCD from day seven to day 14 and viabilities in the 70ŌĆō90% range.

In scale-up after single-cell isolation, the team performed a final clone screening using Ex-Cell advanced fed-batch media in a working volume of 50┬ĀmL. With the cells that had been at 5.7 g/L at the stable-pool stage, ŌĆ£we still had sufficient diversity to to isolate clones with a maximum value of 7.6 g/L. This is a preoptimized expression vector for upstream media development.ŌĆØ

That highest-producing clone moved into early process development comparing different seeding and feed strategies in a 20-day fed-batch process. At the end, viability remained at 90% or higher. ŌĆ£We hit peak VCD between days five and seven and maintained that for the full 20 days.ŌĆØ Gill pointed out that cost-of-goods (CoG) concerns typically would keep most manufacturers from wanting to extend a fed-batch culture longer than that. ŌĆ£But it speaks to the robustness of the cell line. YouŌĆÖre not at the edge of failure at day 14.ŌĆØ

Vector Development: ŌĆ£We hadnŌĆÖt done vector development to that point,ŌĆØ Gill said. Primary screening of seven vectors for green fluorescent protein (GFP) selection identified a vector for performance testing: pSBL1. The CLD group compared a number of different promoter and intron sequences to improve overall expression, then tested the results with different proteins. They found two variations (both using the human EF1 alpha promoter and intron) that showed nearly twofold increases in GFP expression. The same held for expression of an IgG1 and an Fc-fusion molecule.

ŌĆ£Now weŌĆÖre using this expression vector for future CLD programs. But that doesnŌĆÖt keep us from additional testing because we want to look at continued expression- and stability-enhancing elements to drive the technology even further. Do I expect this cell line to go from 11.6 g/L to 22 g/L? I do not. But it speaks again to the robustness that I expect from this cell line that we could expect high titer and robust results from program to program. Once we get initial clones from this IgG1 and this Fc fusion for further characterization both for stability and for protein quality, weŌĆÖll have a better feel of where we would be on the expression standpoint.ŌĆØ

Questions and Answers
Are materials from transient minipools or stable pools suitable for an IND? It makes a lot of sense potentially to continue with the standard approach of isolating individual single cells, generating a research cell bank, and allowing the toxicology manufacturing to be done with a single cell clone. That allows you to rely on the DS for initial stability work that can allow you to file faster with DS stability from your first engineering or GMP run.

What factors should we focus on to select the best cell line? Robustness of the host is most important. I put a lot of emphasis on viability and VCD because they are CQAs. Understanding the mechanism of action of your particular protein is critical, as is designing your analytical capabilities to set specifications around that desired DS. Without a robust cell line to maintain product quality, itŌĆÖs more difficult to do any CMC or testing activities, especially bridging studies you would have to do later on.

What are the most important factors for a fast IND? ItŌĆÖs a good idea to have a plan up front from working with your quality assurance and quality control (QA/QC) and your regulatory folks to make sure everybody is aligned. You have to be aligned up front with a strategy for how to get to an IND that quickly.

Second is a complete understanding of the mechanism of action (MoA) and those PQAs. That allows you to design the specifications and process parameters to prevent surprises that could delay your fast-to-file strategy. The final factor is a well-equipped CDMO for capability and flexibility. I think you have to do a lot of homework up front ŌĆö not so much in terms of time but in how you set up your statement of work (SoW), your letter of intent (LoI), and your plan from the beginning. ItŌĆÖs the same with baking: The ingredients and the process truly dictate the final result. And that will be the same for all the factors driving that fast biopharmaceutical development timeline.