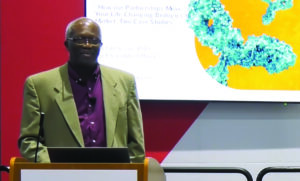 Goodwin Biotechnologyâ€™s mission is to minimize manufacturing risks associated with complex biopharmaceuticals, including antibodyâ€“drug conjugates (ADCs), bioconjugated vaccines, and multispecific antibodies. Sesay described his companyâ€™s capabilities, which span from preclinical process development through commercial supply. Currently, the Goodwin site in Fort Lauderdale, FL, is equipped for 200-L and 500-L bioreactors in both stainless-steel and single-use formats. The company can perform drug substance and drug product manufacturing as well as fillâ€“finish steps, all according to good manufacturing practice (GMP) standards. Goodwin continues to make significant capital investments to support expansion activities in preparation for the 2023 launch of its first marketed product. Sesay noted that his company provides significant value in providing single-site services that simplify biomanufacturing supply chains.

Sesay presented two case studies demonstrating those capabilities. The first example came from process development and GMP manufacturing of first-in-human vaccines for opioid-use disorder (OUD). Citing statistics from the US Food and Drug Administration (FDA), he pointed out that >100,306 people died from fatal drug overdoses between April 2020 and April 2021, with 75% of those cases relating to opioid use. Approved medications such as Î¼-opioid receptor agonists and antagonists show suboptimal efficacy, produce serious side effects, and raise risks for abuse. Goodwin is collaborating with the University of Minnesota and the University of Washington School of Medicine to develop and manufacture candidate vaccines for abuse of heroin and prescription opioids. The candidates are based on bioconjugated oxycodone and morphine haptens, respectively, with keyhole limpet hemocyanin (KLH) serving as a carrier in both cases. Sesay focused on his companyâ€™s work for the oxycodone-hapten product.

After obtaining a license with the US Drug Enforcement Agency, Goodwin received a basic process from its university partners, then performed process development and scale-up geared toward submission of an investigational new drug (IND) application. The goal was to ensure that the resulting process would be efficient and scalable under GMP conditions.

Sesay highlighted his companyâ€™s activities during formulation development. The vaccine required an aluminum hydroxide adjuvant, but the size of the molecule presented formulation challenges, as did its propensity to degrade quickly. However, the Goodwin team negotiated those hurdles to deliver a manufacturing process that would be viable for early clinical supply and scalable for late-stage evaluation and commercialization. Sesay noted that phase 1aâ€“b trials are underway for that candidate.

The Goodwin team established during development activities that the purification process could generate aggregates, although such impurities remained within specifications at that point. When scaling up the process to intermediate and clinical production volumes, highâ€“molecular-weight aggregates formed at out-of-specification (OoS) levels â€” 13.2% and 14.6%, respectively. Thus, the team investigated methods for salt fractionation, filtration, and both resin- and membrane-based chromatography. Ultimately, filtration provided the best solution because it removed >90% of generated aggregates while minimizing impacts to process scalability. The resulting process was highly scalable and yielded drug substance of high monomeric and radiochemical purity.

Sesay noted that Goodwin has produced several GMP batches of the radioimmunoconjugate for late-stage clinical trials. The company continues to perform biologics license application (BLA)-enabling activities for the theranosticâ€™s developer, and BLA submission is scheduled for 2023. Going forward, Goodwin seeks to be at the forefront of manufacturing other complex biopharmaceutical modalities. It plans to work not only with radioimmunoconjugates for theranostic applications, but also with bispecific Fc fusion proteins and antibodies, nanobodies, exosomes and other extracellular vesicles, and bacteriophage technologies.

Fill out the form below to view the full BPI Theater presentation.