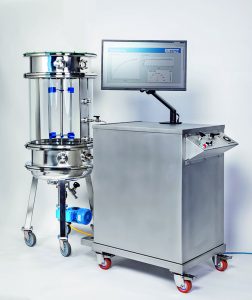 In recent years the biopharmaceutical industry has significantly increased the demands it makes on bioreactor systems. Efficient and reproducible production of active pharmaceuticals of high quality and in large quantities is of highest priority. However, bioprocessing is a complex topic. Numerous factors affect growth of cells in culture but are difficult to determine and interpret reliably. One of the most relevant performance parameters is the volumetric mass transfer coefficient (kLa). It describes the efficiency of gas transfer (e.g., oxygen) from a gaseous phase to liquid solution, which is important because living cells can metabolize oxygen only when itâ€™s dissolved in solution. To allow for cell metabolism to function at its fastest, the dissolved oxygen (DO) concentration must be above a critical level at any point within a bioreactor.

The kLa value is influenced by a number of factors. They include process parameters (agitator speed, temperature, pH, and gassing rate), physiochemical characteristics of the culture medium (viscosity, density, salt content, surface tension, and coalescence behavior), and equipment geometries (vessel, agitator, and sparger). Possible measures that can be taken to optimize (increase) the kLa value include

The kLa value is an attractive planning tool for bioreactor designers and process engineers working in both up- and down-scaled operations. Its timely determination at different stages of a process represent a reliable process analytical technology (PAT) tool that can make bioprocesses more transparent.

How to Measure KLA
Because kLa value depends on a number of hydrodynamic conditions, it cannot be predicted precisely. Mathematical models describing the system kinetics represent an important base for prediction of kLa values. Oxygen sensors typically are used for determination of the actual kLa in a culture, and until recently, such measurements took place at only one point in a bioreactor: at the probe belt near the bottom of the vessel. In practice, DO varies greatly in its distribution throughout the bioreactor volume, so a single measurement is not valid for the whole vessel. Also, gas bubbles passing by an oxygen-sensor membrane can cause the sensor to report inaccurate signals.

The new ZETA system for the determination of kLa values revolutionizes bioreactor design. A measurement tool with an oxygen sensor was developed to be compatible with any nozzle on a bioreactor for sampling (in-line). A pump guides sample material to an optical high-speed sensor that measures DO within tenths of a second. So now measurements for kLa value determination can be taken at any point in a bioreactor, enabling a comprehensive picture of actual production conditions within different vessel zones.

For kLa determination, ZETA uses the dynamic startup method (DSM). First, DO is stripped out with the help of nitrogen so that oxygen content is 0%Â when the measurement starts. Next, with the start of an agitator and gassing system, the oxygen concentration begins to increase. By integrating the DO curve, users can calculate a precise kLa value. An advantage of this method is the availability of all technical requirements (e.g., sterile aeration and nitrogen supply) at commercial scale.

Measurements at different areas in the bioreactor allow a correlation for each point. The more precisely these measurement points are defined, the more reliable will be the characterization of the whole bioreactor system.

Characterization and Optimization of Existing Bioreactors
The new method is applicable to several fields of endeavor. During bioreactor design and use, it facilitates the identification of risks, helps to generate representative scale-down models, and aids feed-strategy optimization. A special benefit of ZETAâ€™s mobile measurement device is its applicability to existing plants without the need for structural changes. 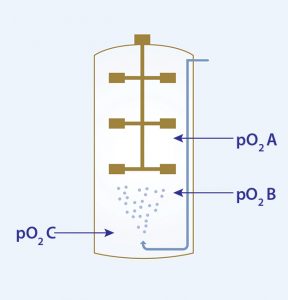 Figure 1: Positions of pO2 sensors in the case-study bioreactor

Case Study: In one application of the technology, three high-speed pO2 sensors were placed at defined positions in a commercial scale bioreactor with three Rushton-like impellers and a working volume of â‰¤12 mÂł (Figure 1). Using the DSM method described above, degassing with nitrogen was performed for 10 minutes, followed by subsequent gassing with compressed air through the sparger. In more than 20 trials, different agitator speeds, gassing rates, and head pressure conditions were tested in duplicate. The standard kLa equation was adjusted to take into consideration both the delay time (time of DO to reach the sensor) and the response time of the electrode according to Tobajas and Garcia-Calvo (1).

The study showed that the kLa value of the upper sensor (pO2 A) is strongly influenced by the filling level of theÂ cultivation broth. And it was evident that oxygen dissolution from the head space has a significant influence on the kLa value within that same zone. It is interesting to note that the middle part of the bioreactor showed the highest kLa value, followed by the top and the bottom parts (independent of gassing rate), which means that the middle zone of such a bioreactor will provide the best growth conditions for living cells (Table 1). That zoning effect was reduced at higher agitator speeds, and a gassing optimum was observed for 1.6 vvm at maximum stirrer speed.

Vital information for Process Design
Determination of performance indicators such as mixing time and kLa provides insight into crucial bioprocess criteria and helps biomanufacturers find the perfect position for vessel installations according to the distribution of different zones. ForÂ example, both the carbon-source feed rate and feed-pipe positions are important for product yield and quality during fed-batch cultures. A substrate surplus inhibits growth and product formation. If the feed-pipe location is not selected carefully or installed at a position where the DO level is low, then a double-negative effect will slow down cell metabolism in a culture. That risk can be minimized by knowing precise kLa values in the different zones and by taking appropriate measures based on that information.