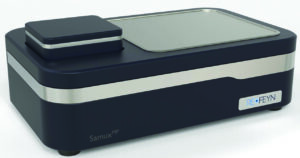 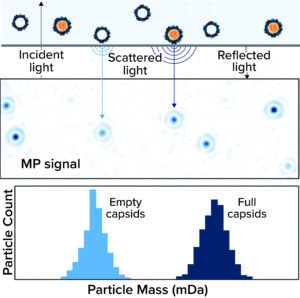 Figure 1: Mass photometry (MP) measures the light reflected by a glass coverslip, the light scattered by particles within a sample, and the interference between those values to determine a particleŌĆÖs mass. That principle enables calculation of empty-to-full capsid ratios during characterization of adenoassociated virus (AAV) vectors.

Mass photometry (MP) simply, accurately, and quickly distinguishes between full and empty AAV capsids. In a typical workflow, samples are placed onto a glass coverslip and then exposed to light. Some light reflects from the glassŌĆōwater interface; some passes through and is scattered by particles in the sample. Mass photometers measure the amounts of reflected and scattered light as well as the level of interference between them to determine each particleŌĆÖs mass (Figure 1). Contaminants, empty capsids, and full capsids differ significantly in mass ŌĆö <2 mDa, ~3.7 mDa, and ~4.1ŌĆō5.3 mDa, respectively. Thus, analyzing the mass distribution within a sample enables determination of E:F capsid ratios.

Rogers noted that the SamuxMP benchtop MP system is optimized for a mass range relevant to AAV analytics (3ŌĆō6 mDa). Made of materials chosen to simplify decontamination procedures, the instrument comes preloaded with software designed to facilitate calculation of E:F capsid ratios. Rogers highlighted that the system can handle low-volume samples (10ŌĆō20 ┬ĄL) from any downstream process step. Because MP is a label-free method, samples require minimal preparation. Results are generated within five minutes. Such features, Rogers explained, could make the SamuxMP system an attractive orthogonal technology to time- and resource-intensive analytical centrifugation (AUC), which is the industryŌĆÖs gold-standard method for quantifying E:F capsid ratios.

The SamuxMP system takes accurate measurements across a broad range of E:F capsid ratios. Rogers related that his company collaborated with the Cell and Gene Therapy Catapult (London, UK) to evaluate the performance of a prototype. Catapult scientists mixed reference materials of empty and full capsids in different proportions, then ran those samples on the prototype. Observed E:F capsid ratios accorded with expected values. The results also tracked closely with historical data from tests based on AUC and transmission electron cryomicroscopy (cryo-TEM).

The Catapult conducted additional studies for robustness assessment. Two operators performed six replicate experiments based on six independent runs. Data from those tests demonstrated that the system measures samples with high intermediate precision and experimental reproducibility, demonstrated by coefficients of variation (CVs) of 11.74% and 10.87%, respectively. Both of those values, Rogers noted, were well within the CatapultŌĆÖs acceptance criteria.

Refeyn later worked with Utrecht University to study the effects of different AAV serotypes on SamuxMP system performance. Scientists compared mass-distribution profiles across AAV8 samples from two distributors and AAV5 samples from one supplier. The profiles were highly similar, indicating not only that the AAV8 data were precise and reproducible, but also that the instrument works across serotypes.

McManusŌĆÖs Presentation
Pharmaron Gene Therapy provides CDMO services for AAV-based therapies. McManus noted that E:F capsid analysis is among the most difficult kinds of testing that her company performs. To help clients make informed decisions during process development, Pharmaron needs methods that perform robustly and rapidly using relatively inexpensive materials. Such methods also must be able to handle small-volume samples that might have low vector concentrations.

Pharmaron evaluated the SamuxMP system to determine whether it could meet those criteria. Scientists compared its performance with that of an AUC system in analyzing samples of drug-substance purity. The instruments generated comparable results that resolved empty from partial capsids, so analysts performed similar studies with samples based on a different AAV serotype. Results from those experiments also tracked closely across instruments, supporting the SamuxMP systemŌĆÖs application to complement AUC. Equally encouraging was that the MP instrument resolved empty, full, and partially filled capsids of that serotype.

Next, McManusŌĆÖs team performed experiments like those of the Cell and Gene Therapy Catapult. Reference materials for full/partial and empty capsids were blended in different proportions, then analyzed using a SamuxMP instrument. Based on data from MP analysis of a commercially available AAV control sample with predominantly (~95%) full/partial capsids, the team calculated expected values for the blended samples. The observed E:F ratios showed linearity with the expected values, with a coefficient of determination (R2) of Ōēź0.96. Because the full and partial species could be resolved, they also were analyzed independently, generating R2 values of Ōēź0.89 and Ōēź0.96, respectively.

In the webinarŌĆÖs final case study, McManus described how Pharmaron used the SamuxMP system to optimize protocols for a chromatography process comprising one capture and two polishing steps. To evaluate the efficacy of the capture step, her team collected samples from the process eluate, analyzed them by MP, and compared the resulting mass-distribution profile and E:F calculation with the process chromatogram. MP effectively resolved the empty and full AAV capsids, indicating that full capsids accounted for 9.2% of virions in the eluate. Low-mass impurities were present on the mass-distribution plot, but they were resolved easily and made little impact on E:F calculation.

For the polishing steps, McManusŌĆÖs team used the SamuxMP system to identify which elution fractions contained the highest percentages of full capsids. Three pooled fractions were collected from the first step. As expected, the mass distribution in the first fraction indicated the elution of low-mass contaminants, whereas the second and third fractions contained 16.6% and 6.1% full capsids, respectively. Those results were consistent with findings from the process chromatogram. Thus, material from the second fraction could be loaded for subsequent purification.

The final polishing step required MP analysis of four pooled fractions. Full-capsid percentages increased as the process continued, going from undetectable levels to 0.5%, 5.3%, and ultimately 59.9%. Thus, the final fraction could be leveraged to recover the greatest quantity of full capsids.

McManus reported that data generated by the SamuxMP system were consistent with results from process chromatograms gathered at each purification step. MP holds much promise as a simple, rapid, accurate, and cost-effective orthogonal method for AAV characterization.

Questions and Answers
What is the minimum vector concentration required by the SamuxMP instrument? AAV concentrations of 1010 vg/mL suffice, although the system operates best when titers are 1011 vg/mL.

Can MP be applied to analyze upstream AAV samples? MP is more useful for downstream development and optimization rather than for upstream activities because upstream samples (e.g., from bioreactor harvests) contain many impurities that limit MPŌĆÖs effectiveness.

Can the SamuxMP instrument be used to study other viruses? It can be used to analyze virions with a diameter as large as 80 nm. (AAV particles have diameters of ~27 nm.)

What consumables are used during each measurement? Each run requires a glass coverslip with a ŌĆ£sample well cassette,ŌĆØ which is a silicone gasket containing a series of wells. Those consumables are available for purchase on the Refeyn website.

In PharmaronŌĆÖs experience, what have been the systemŌĆÖs most important advantages? Although the company has yet to integrate the instrument fully into its operations, the system holds much promise for reducing the amount of time, material, and capital required to determine E:F capsid ratios. AUC processes can require 400 ╬╝L of material with AAV concentrations of 1012 vg/mL. They also have limited throughput. The SamuxMP system would enable significantly higher throughput using much less product.