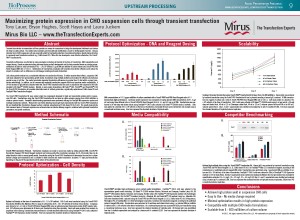 Transfection efficiencies are affected by many parameters including cell density at the time of transfection, DNA concentration and reagent dosing. Based on extensive testing performed during product development and the data presented herein our starting recom-mendations include an initial cell density of 0.5 – 1.0 x 106 cells/ml, 1 őľg of DNA per milliliter of culture volume and TransIT-PRO:PRO Boost Reagent:DNA ratio of 1:0.5:1. Optimization of transfection parameters will maximize transfection efficiency and reduce the impact of variables such as differences in cell lineage, handling and media formulation.