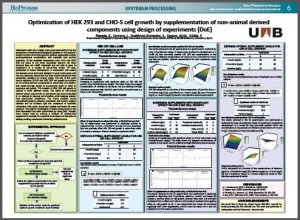 Mammalian cells are a widely used expression platform for the production of recombinant therapeutic proteins or viral particle-based vaccines since they typically perform appropriate protein post-translational modifications and authentic viral particle assembly. Of the available mammalian cells, CHO and HEK 293 are some of the most industrially relevant cell lines because they are cGMP compliant and are able to grow in suspension in a variety of serum-free media. Of note, production of human therapeutics in mammalian cell culture has become more and more stringent in past recent years and not only demands serum-free but also animal-component free production conditions to ensure safety.

For these studies, three recombinant proteins (albumin, transferrin and insulin), sodium selenite and an in-house lipid mix composed of synthetic cholesterol, fatty acids, tocopherol acetate and tween 80 were selected. The optimal combination of these components in the final formulation has been determined by using DoE. Results have shown that by adding a mixture of animal-free supplements normally it is possible to increase cell densities in already existing commercial chemically defined media.