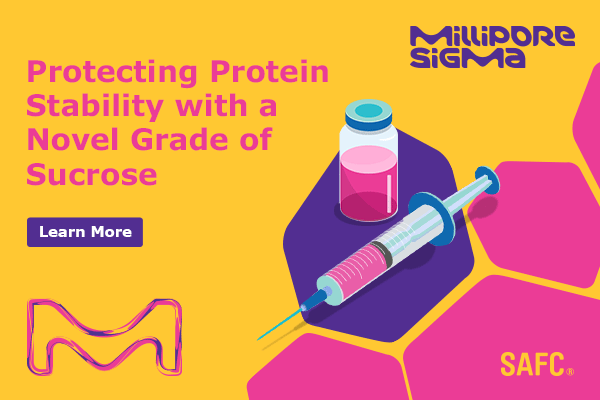 Ensuring the chemical and physical stability of the therapeutic protein is critical to the safety and efficacy of biopharmaceuticals and presents one of the major challenges in formulation. A number of excipients, including sugars, can be used to solve this problem. Sugars are stabilizers that maintain conformational stability by preferential exclusion and function as cryo- and lyoprotectors in lyophilized formulations. Given these properties, it is not surprising that sucrose is one of the most widely used stabilizers in marketed drug products.

A challenge with the use of sucrose as an excipient, however, is that nanoparticle impurities (NPI) in a size range of 100â€“200 nm have been detected in pharmaceutical grade sucrose. These impurities originate from the raw materials or can be introduced during production, and are not entirely removed during the sugar refinement process. NPIs can lead to false analytical results as they mimic protein aggregates. They can also induce protein aggregation, fragmentation and particle formation, resulting in reduced stability of therapeutic protein formulations. While the quality of pharmaceutical-grade sucrose is regulated by pharmacopeias, the pharmacopeial monographs do not demand testing for NPIs. As such, there is no way of knowing which batch of sucrose might have a low or high NPI concentration, thus presenting a challenge for its use as an excipient in formulations.

This white paper provides an overview of NPIs found in commercially available sucrose, their origin and impact on protein stability and describes a novel sucrose purification process designed to minimize the presence of NPIs.