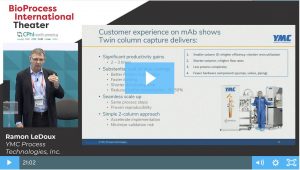 LeDoux focused his presentation on downstream bioprocess techniques, specifically scaling up multicolumn processes. Relatively new advances in twin-column technology have brought significant increases in productivity over the past several years. That led YMC Process Technologies to adopt a twin-column approach.

A challenge with traditional chromatography has been to balance purity, throughput, and recovery. â€śIf purity is your standard,â€ť LeDoux stated, then â€śtypically if you want high recoveries, your throughput suffers. Overloading a column reduces resolution. So if you need high recovery, you can put less on the column, and throughput drops. If I need high throughput, my recoveries will drop because I have to take smaller fractions. We need to come up with a strategy to decouple purity and recovery so that we can obtain both.â€ť

Using antibodies as an example, he said that a traditional approach would put the sample on a column until it reaches breakthrough. At that point, loading would stop, and the column would be washed and eluted. Then the column would be cleaned and reequilibrated before another batch of material could be loaded. LeDoux urged the need for a strategy to use resin capacity more efficiently. He then showed a dual column
approach using the same chemistries but to improve productivity by increasing unit loading.

â€śWe start with the same exact strategy. When we reach breakthrough, instead of stopping, weâ€™re going to continue loading to get the full use of that resin in the first column. We capture that at the capacity of that loading step, then wash the antibody onto the second column and decouple the columns, elute that first column, lower the pH, and increase salt concentration. We will elute the material just like we would in
a typical batch process, but also continue loading the second column â€” so weâ€™re running in two parallel processes. We reclean that first column after we elute it, reequilibrate it with loading buffer, and as we reach overload on the second
column, we recouple the columns and capture the overflow again.â€ť

This approach makes the most of a resinâ€™s loading capacity. Because use of a resin is dictated by the number of cleaning cycles it can withstand, the more material that can be processed, the greater the productivity of the resin will be. LeDoux presented several case studies highlighting scal-eup data from two monoclonal antibody (MAb) products. In one example of batch data from a single column of 20-cm in diameter and length, 6.3L total resin was used with a binding capacity of 35 g/L. Similar results were seen in a second application with a 2,000-L bioreactor run at 5 g/L. The process team was able to move from using a 60-cmâ€“diameter column to a 45-cm column, which provided significant savings in resin costs. LeDoux noted also that during scale-up, a company can generate buffer savings by combining a dual-column approach with buffer dilution, which also offers benefits of increased floorspace and productivity.

LeDoux spoke about peptide purification, which is different from protein purification but still requires decoupling the purity curve from recovery levels. In a traditional peptide purification, LeDoux said that he would pool early and late fractions of products that donâ€™t need purity specifications, then either lose that material or reprocess it manually. With a new multicolumn counter-current solvent gradient purification
(MCSGP) process, material is recycled automatically to reprocess whatever peptide of interest doesnâ€™t meet purity specification onto a second column. These are traditional
elution and column operations, but the strategy is to reprocess the fractions that arenâ€™t purified enough.

During scale-up, column length must be maintained. The diameters can be adjusted to increase the scale. The key point of the new approach is an ability to reduce column diameters overall while increasing productivity. â€śWe went from 19% yield on the first pass of chromatography before reprocessing and were able to increase productivity to 94%,â€ť noted LeDoux. â€śThat translates to lower solvent consumption and higher
productivity numbers.â€ť

As recoveries increase during peptide manufacturing, the synthesis step can be scaled down as well. LeDoux concluded by saying that his companyâ€™s process went from requiring a 60-cm column down to using a 30-cm column with comparable results.