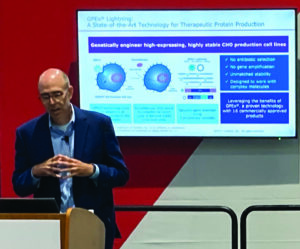 Catalent scientists insert the genes for dedicator-of-cytokinesis (DOCK) proteins ‚Äî which are involved in intracellular signaling ‚Äî at many sites throughout the genome of a chosen knockout cell line. The resulting cells are screened to identify the best results, with clonal selection by a Berkeley Lights Beacon instrument. Genes of interest can be ‚Äúflipped‚Äù into those DOCK sites with a recombinase. That provides for site-directed, specific insertion of a given gene without antibiotic selection or gene amplification, and the resulting GPEx cell lines are documented to be extremely stable. The final cells are screened again to selected the best-performing clone for different fed-batch culture conditions and scale-up.

Bleck explained that this process was designed to facilitate insertion of multiple genes at a time, such as the three required to express virus-like particles. Or a gene for an enzyme could be included for processing the final expressed protein. The genes for different proteins can be included at different ratios depending on what is needed for proper function.

GPEx Lightning cell pools exhibit similar stability to that of clonal lines. Bleck showed data from an Fc-fusion protein, two monoclonal antibodies, and a bispecific antibody, all produced over 40 generations. Titers and productivities were consistent for all. Bleck suggested that such cell pools could be used to produce toxicology-study materials for generating investigational new drug (IND) application data ‚Äî and even supplies for early clinical trials in highly accelerated programs.

Beck highlighted one four-chain bispecific antibody project requiring four different genes. ‚ÄúWe needed to balance the chain ratios to get the proper antibody formation.‚Äù One chains proved to be slightly toxic to the cells, necessitating precise optimization of expression levels. Studies compared the results with a reference standard. ‚ÄúEven without purification, we were getting something pretty much identical to what was seen after purification. And we were seeing a little over 4 g/L production for this complex molecule.‚Äù

Such high titers and consistency from cell pools can help shorten timelines. Some clients may be interested in using GMP pool production for proteins used in production of other therapeutics ‚Äî e.g., viral vectors and antibodies used in cell therapy processing. For diagnostics, antibodies need to be made quickly for detecting new variants such as those that have arisen from SARS-CoV-2. Those could be made from cell pools.

Bleck illustrated clonal selection with an Fc-fusion molecule. From a pool producing ~4 g/L, the team used a Beacon system to select the top 25 clones based on productivity alone, then narrowed that to three using a fed-batch spin-tube culture. The top three producers went through a 60-generation stability study to yield a final clone.

Not all of the 200 DOCK genes in the base cell line get filled during the ‚Äúflipping-in‚Äù process. Data showed that the fill ratio ranged 25‚Äì100% in the 25 isolated clones, leading to some variabilities in expression. ‚ÄúThe more DOCKs you get filled, the higher the expression level,‚Äù Bleck said. The top three producers expressed the Fc-fusion protein at ~5 g/L, ~6¬Ýg/L, and ~7 g/L. The highest-expressing clones in the bispecific project produced correctly structured and functional four-chain antibodies at ~11 g/L, without cytotoxic levels of the troublesome chain.

‚ÄúEven when we run the process in triplicate,‚Äù Bleck concluded, ‚Äúwe see very consistent production in our cell pools.‚Äù Clonal selection optimizes that further and enables developers to focus on specific characteristics such as in the bispecific case.
Catalent both licenses this technology out and works with clients to perform cell-line development as a service. The relatively straightforward methodology is based on traditional transfection and GS-selection techniques.

Fill out the form below to view the full BPI Theater presentation.