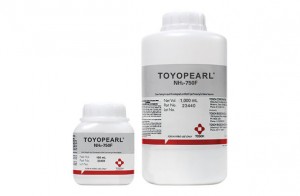 The drive to reduce the manufacturing costs for biological therapeutics have increased the demands placed on downstream unit operations to the point where a single processing step is expected to accomplish a multitude of purification objectives. Where anion exchange resins have traditionally been used to remove DNA, endotoxin, and as a viral clearance step in the purification of monoclonal antibodies (mAbs), new ligand chemistries make it possible for anion exchange chromatography to do more. In the following paper, TOYOPEARL NH2-750F, a salt tolerant anion exchange resin from Tosoh Bioscience, is shown to be able to remove mAb dimer and higher order aggregates from mAb monomer.