Of the available on-line biomass assay types, radio-frequency impedance spectroscopy (RFI, often referred to as capacitance) is generally regarded as the most robust and reliable method for monitoring viable biomass during fermentation and cell culture. The first article to show that capacitance could be used to estimate microbial biomass dates back over 20 years (1). Today the technology is routinely used for monitoring and controlling mammalian cell culture processes and high-density yeast and bacterial fermentations in research, process development, and manufacturing applications. Capacitance assays have proven to be robust and easy to scale up. Furthermore, capacitance measurements are insensitive to gas bubbles or debris with cells either in suspension or attached to inert carriers (2).

The advent of disposable bioreactors has led many biopharmaceutical companies to switch from conventional glass or stainless steel vessels to single-use alternatives. Some on-line probes can be provided with disposable bioreactors, but these are often limited in their measurement ability to pH, temperature, and dissolved oxygen (pO2). Most single-use bioreactors have been used for producing seed cultures or for low cell densities using batch-production processes in which accurate measurement and control are not critical. Such systems and processes often require no validation. However, new CGMP processes are including disposable bioreactors. Consequently, demand should increase for the same range of sensors (including those for measuring viable biomass) that are used with conventional bioreactors.

RF impedance spectroscopy is a process for measuring the dielectric properties of a cell suspension. From such measurements, it is possible to derive biomass content and certain cell properties (cell diameter and internal conductivity). 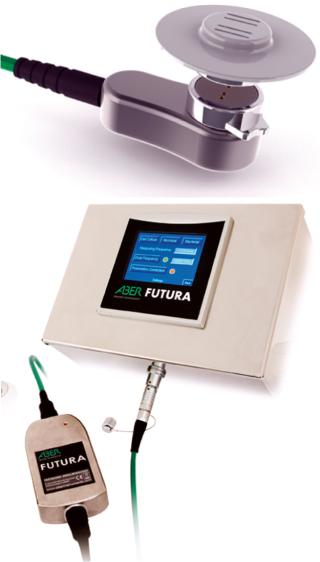 When an electric field is applied to cells suspended in an aqueous, ionic solution, the ions in that solution are forced to move. Positively charged ions are pushed in the direction of the field; negatively charged ions are pulled in the opposite direction (Figure 1). Ions both inside and outside the cells move until they encounter plasma membranes, which act as insulating physical barriers to prevent further movement. Bulk movement causes a charge separation or polarization of the cells. The magnitude of resulting field-induced separations is measured by capacitance (C), which is typically reported in pico-Farads (pF). As the volume fraction of cells in a suspension increases, the number of polarized membranes also increases to yield a higher measured capacitance. Thus, by measuring capacitance of a suspension at one or more appropriate frequencies, its biomass can be estimated (1).

Dead cells and nonbiomass solids have no intact plasma membranes and so do not polarize significantly, nor do they contribute significantly to the capacitance of a cell suspension. If oil droplets, debris, or gas bubbles are present in the suspension medium, they will not contribute directly to the measured capacitance because they are also not membrane-enclosed particles. 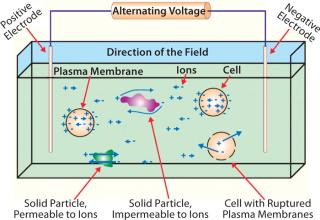 Electrode Effects: Electrode polarization is the most critical factor that affects capacitance measurements at low radio frequencies. When a voltage potential is applied to electrodes, a layer of countercharges is attracted to each electrode surface. That layer produces its own capacitance in addition to signals from the cellular suspension. One means of reducing electrode polarization is to use a four-electrode system (Figure 2). 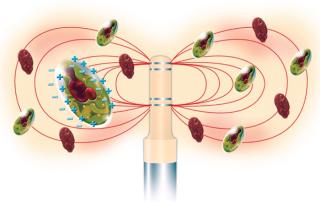 Electrodes become more polarized as current through them increases. In a typical RF impedance system for measuring biomass, currents are generated at the two outermost electrodes, which induce a voltage drop across the two innermost electrodes. Voltage can be measured with minimal currents, so electrode polarization is reduced on the inner electrodes.

Launched by Aber Instruments in 2010, the Futura RFI system was designed for conventional, miniature, and disposable bioreactors. Most cell culture applications of this system use a unique polarization-correction mode for monitoring and control of live cell concentration in suspension cell cultures. The in
strument measures both capacitance and conductivity either at one frequency (typically 0.5 MHz) or in dual-frequency mode. Scanning the capacitance between 0.1 MHz and 20 MHz using Futura SCADA (supervisory control and data acquisition) software also makes possible online measurement of other important parameters such as average cell size, cell membrane capacitance, and cell interior conductivity (2,3). Such measurements can provide useful information about the physiological state of cells to assist in better understanding as well as controlling fermentation or cell culture processes (4,5,6).

The Futura system comes in three configurations, with each version optimized for the type or size of bioreactor. Two versions can be used with conventional reusable probes inserted into a disposable fermentor through a sterile connector. The Mini-Remote Futura (MRF) system is designed specifically for single-use bioreactors.

On-line RFI instruments have traditionally incorporated transmitters, but the Futura system uses flexible bus connectivity that allows multiple units to be easily connected to a personal computer, bioreactor controller, or SCADA system through a simple hub. This connectivity reduces the overall costs of complex systems and requires a much smaller footprint than previous biomass systems have needed. The hub can be provided with one, four, or eight inputs from local fermentors. If a local display is required, then the system can be connected to a small, color, touch-screen programmable logic controller (PLC) that is panel or desk-top mounted (Photo 1, BOTTOM).

The sensitivity of Futura probes is maximized by generation of large, even electric fields from either four annular-ring electrodes (Figure 2) or four parallel-flush electrodes. A smooth surface reduces potential areas of entrapment and fouling, and durable construction allows for in situ sterilization or autoclaving. For CGMP cell cultures, both designs provide an optimum surface to reduce the build-up of cells during up to three months of continuous cell culture.

The Futura system is configured to run in four configurations: bacterial, microbial, cell culture, and custom modes. These allow end users to quickly set the measuring frequency and filtering appropriate for the types of cells being monitored. In custom mode, users can change the frequencies and filtering to allow further optimization of those parameters or to match settings from previous experience with other Aber products.

With the advent of the Futura product line, Aber Instruments introduces disposable live-biomass probe options. These have been carefully designed to be welded into most single-use bioreactor bags including those with agitators â€” e.g., Thermo Scientific Hyclone SUB (www.thermo.com), Xcellerex XDR (www.xcellerex.com), Sartorius Stedim Biotech CultiBag STR (www.sartorius-stedim.com), and Millipore Mobius CellReady (www.millipore.com) models â€” or bioreactors that use rocking platforms such as Sartorius Stedim Biotech CultiBag RM and Wave Bioreactor units. A disposable probe easily connects to a miniature lightweight preamplifier (Photo 1, TOP) to minimize torque and weight load on the bag and keep most electronics away from the bag. The disposable probe has already been welded into different bags, and Photos 2 shows prototype examples using Sartorius Stedim Biotech CultiBag RM and Millipore Mobius CellReady 3-L rigid body bioreactors.

Performance of the disposable probe has been assessed with the Millipore single-use bioreactor. In a series of experiments, we monitored the viable cell density of CHO cells over a two-week period using a conventional reusable annular biomass probe, a disposable probe connected to a Mini-Remote Futura device, and by off-line measurements with a Vi-CELL instrument from Beckman Coulter (www.coulterflow.com). Figure 3 demonstrates that capacitance measurements from both probes trend very closely to one another as well as to the off-line measurements (4). 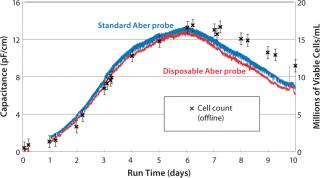 The disposable probe also has been assessed with a prototype 50-L Sartorius Stedim Biotech CultiBag RM (25 L working volume) in monitoring the growth of Sf9 insect cells (Figure 4). The probe tracked viable cell density before addition of a baculovirus for transient recombinant protein expression. The biomass probe successfully detected a valid infection by showing a rapid increase in signal caused by increasing volumes of the infected cells. 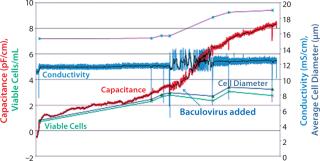 Aber Instruments has also developed a patent-pending two-part disposable probe (3). This design is particularly suited to the Hyclone SUB system or other disposable bioreactors with a series of available tube-ports on the side of their bags. The disposable portion of this probe comprises a plastic asse
mbly containing measuring electrodes that can be preinserted into a bag port (Photos 3) and irradiated with the bag. All wetted materials of these probes are USP class VI compliant. The biomass monitor system is completed by a dedicated, reusable probe adaptor designed to electrically connect that disposable portion to a Futura biomass monitor.

Using a Reusable Probe in a Disposable Bioreactor

Many large-scale disposable bioreactors are based on the tank-liner design (e.g., Hyclone and XCellerex). Existing ports on those bags can be used for inserting a reusable 12-mm biomass probe designed to a correct insertion length. Sterile connectors such as Pall Kleenpak models (www.pall.com) can allow presterilized probes to be inserted into these bioreactors.

GlaxoSmithKline in the United Kingdom assessed performance of an Aber reusable biomass probe with a 50-L working-volume Hyclone bag growing a CHO cell line to express a monoclonal antibody. Figure 5 shows smoothed on-line capacitance data together with off-line viable-cell concentration and viability data obtained by a Vi-CELL instrument. This particular CHO cell line was prone to clumping, so the capacitance profile shown is based on a median capacitance (based on three samples) to remove large spikes in the data. The dip in capacitance at Day 7 is due to dilution during culture feed. The capacitance profile and off-line data trended close together as far as day 14, despite decreasing cell diameters.

Use of RF impedance to monitor cell culture processes is well established in biopharmaceutical applications. Introduction of the Futura biomass monitor allows this technology to be used with confidence on disposable bioreactors, from process development through CGMP production.