Transgenic plants are increasingly considered a competing system for producing high-value recombinant proteins for biomedical and industrial purposes at affordable costs (1). Researchers have shown that molecular farming (or biopharming) is a secure technology that is capable of rendering valuable recombinant proteins free of toxins and animal pathogens in a relatively short time (2,3,4,5,6). Scientists have also demonstrated that most recombinant antibodies produced in plants maintain their functional properties (substantial bioequivalence) as well as do those produced in mammalian cell cultures (7, 8).

Full antibody 14D9 is an IgG1- type immunoglobulin from mice that catalyzes the enantioselective protonation of prochiral enol ethers (9). Recombinant full antibody r14D9 has been expressed in Nicotiana tabacum plants as well as organ, tissue, and cell-suspension cultures. Highest yields were obtained with the KDEL retrieving signal to the endoplasmic reticulum (Ab-KDEL line) (10, 11).

To develop a large-scale bioprocess, it is important to optimize that process by balancing biological and engineering variables for maximizing productivity. One bottleneck in biopharming is the scalability and modeling of batch cultures at large scale. Fundamentally, difficulties arise because bioreactors and mathematical models originally were designed for microbial monocultures, precise chemical inputs, and best-case process measures. Those factors have led to computerized or remote-controlled automation mainly for ensuring regulatory compliance (12,13,14,15,16).

Plant cells harbor metabolic processes that are relatively more elaborate than those of microorganisms and involve more genetic and/or metabolic regulatory controls. In addition, suspension-cultured plant cells tend to aggregate, are prone to rapid sedimentation, and are vulnerable to high-shear sensitivity (17). So a mathematical model is needed that acknowledges kinetic and growth processes, basic aspects of cell structure, and physiology and productivity.

Klykov and Kurakov proposed a new combination of structured and unstructured mathematical models for cell cultivation in fed-batch and chemostat systems that resolve certain drawbacks (18,19,20). In that integrated model, the ratio of maintenance energy to energy consumed for biomass growth or the precise rate of accumulation of stable or nondividing cells is taken into account (Figure 1). The model is based on treating the biomass as two main groups: dividing and nondividing cells (using a combination of statistical data and qualitative causal assumptions). So a phytofermentation process is a “mixture” of cells of different ages.This is population characterized by the parameter R (R = Xst/X, in which Xst is the nondividing cell concentration at the synchronized degree R, and X is the biomass). The age structure of a cell population varies. Thus characterizing those variations is fundamental for the structured model. 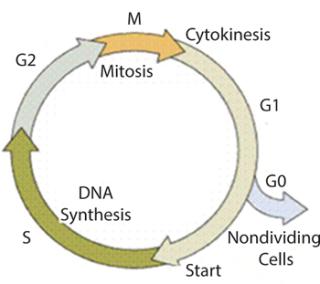 By contrast, the unstructured model is based on decreasing absolute and specific growth rates of the biomass. Those parameters are directly related to biomass concentration at the growth limitation phase when oxygen is limited (GIP). Also in this model, energy substrate consumption rate for viability maintenance m is specified by oxygen and trophic coefficient a that is assumed as a constant (A = m/a). During GIP, the population is synchronized to nonproliferating cells, which consume oxygen only for primary metabolism.

Here, we have scaled up the Ab-KDEL cell-suspension culture from a 225-mL Erlenmeyer flask to a 2-L bioreactor. We used the mathematical model described above to estimate and predict growth rate of cell cultures and expression level of recombinant protein. We used two inoculum sizes to obtain experimental data and to calculate specific growth rates and productivity for testing the model under those two conditions.

We made plant extract by disrupting plant material in a homogenizer (Polytron PT 10-35, Kinematica) and adding cold phosphate-buffered saline (0.24 g KH2PO4/L, 1.44 g Na2HPO4/L, 0.2 g KCl/L, 8 g NaCl/L, pH 7.0– 7.2) containing 10-g leupeptin/mL. We centrifuged it at 14,000g for 20 min at 4 °C and used the supernatant for
conducting the analytical tests. We performed sodium-dodecyl sulfate polyacrylamide gel electrophoresis (SDS-PAGE) (9%) in a nonreducing condition with a loading volume of 30 µL for each sample and stained it with Coomassie Brilliant blue R-250 (23).

Mathematical Models: Cell suspension cultivation is often complicated because of cell aggregation, which forms specific zones where cell growth is limited and nondividing cells accumulate. So a cell population rapidly differentiates intodividing and nondividing (stable) cells. To calculate the dynamics of cell growth, it is necessary to take into account the difference in energy substrate metabolism of stable and proliferating cells in such zones and use both structured and unstructured models that were previously successfully applied for batch processes (18, 19).

is the structured model for biomass in the growth inhibition phase (GIP). is a structured model for substrate (metabolites) in the growth inhibition phase, in which n is an integer specifying the order of the derivative of this function; Xdiv is the quantity of dividing cells; Xst is the quantity of nondividing (stable) cells; K is the overall growth rate multiplied by the rate of accumulation of stable (or nondividing) cells; A is the ratio of energy required to maintain viability to energy required for biomass accumulation and/or maintaining the rate of accumulation of stable (nondividing) cells. If n = 1, then C = 1; if n = 2, then C = 0. P and S are the metabolite and the substrate, respectively, so that kdivP,S and kstP,S coefficients are constants for synthesis of dividing and nondividing cells.

Parameter A, which was not used in any practical way earlier, estimates periodic culture growth and describes a delay of total biomass growth rate. Delay of growth during the growth inhibition phase (GIP) occurs because of a presence of limitation factors such as low concentrations of dissolved oxygen, nutrients, medium heterogeneity, or other variables that provoke growth arrest. During GIP, the share of stable cells within the population is equal to that of nonproliferating cells, which consume energy. At that point, accumulation of stable cells occurs at a constant specific rate equal to that of the growth delay (A = m/a). On the basis of the present model, we described consumption of substrates used for cell construction and synthesis of metabolites in the cultures consisting of two groups of cells differing in energy consumption. Specific growth rate of biomass X per hour (µ), maximum culture specific growth rate (µmax), and other significant parameters were calculated according to methods decribed previously (19).

Statistical Analysis: We carried out independent experiments in duplicate. Samples were taken every two days during each assay. We performed analytical determinations in triplicate and ANOVA in each test. A Tukey test established significant differences (p < 0.05).

We selected kLa as the criterion for scaling up the process — with the same value in both the Erlenmeyer flask and the bioreactor (42.7/h), which is in the expected range (10–50/h) for plant cell-suspension cultures (21). The high aeration and homogenization levels attained in this bioreactor are advantageous because they produce a gentle flow (preventing the formation of cell clumps) and a moderate shear stress (1).

Figure 2 shows the growth phase during Ab-KDEL suspension culture at the two inoculum sizes tested. The growth curves show that the lag phase extended to the fourth day for bothmanuscript.inoculum sizes. That was followed by an exponential phase up to the eighth day for 1% w/v (Figure 2A) and to the 10th day for 5% w/v inoculum size (Figure 2B). Then both cultures reached stationary phase. 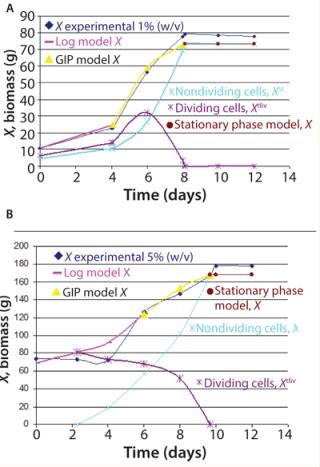 We found significant differences (p < 0.05) regarding growth (80 g/L and 180 g/L maximal biomass in 1% and 5% w/v inoculum size, respectively). This underlines the significance of the inoculum density, which affects cell physiology, nutrient and oxygen avoidance, and rheological and physical characteristics of the batch culture. The complexity of this biological phenomenon requires use of nonlinear mathematical models to identify growth parameters and design a predictable model (20). Based on the Klykov–Kurakov model, consumption rate of substrates used for primary and secondary metabolites and expression of the recombinant prote
in in the cultures are determined by the energy demand of the two groups of cells (). Figure 2 also shows a comparative analysis of dividing and nondividing cells at both inoculum sizes using both unstructured and structured models. The dividing cells (log model, X) match experimental data and grow to day four or six, depending on the inoculum size (1% or 5% w/v, respectively). The model also predicts the proliferation of nondividing cells (shown by the GIP) and a decrease in dividing cell population (which entered stationary phase between days 8 and 10), as observed in the experimental data. The experimental coefficient µmax showed significant differences between 1% w/v (max = 0.201/d) and 5% w/v (0.073/d) inoculum sizes, in accordance with the model applied (Figure 2).

Furthermore, pH values vary during the cultivation in accordance with earlier experimental data and predicted dynamics of the biomass in the batch cultures (Figure 3). The pH showed an initial acidification of the media followed by an increase up to the end in both cultures. Progressive acidification result from preferential ammonium (NH4 +) uptake by the cells. After ammonium depletion, increased pH promotes consumption of available nitrate (NO3-). In addition, we observed significant differences in relative acidity measured in both batch cultures (Figure 3). The batch inoculated with the smaller inoculum showed less acidification — followed by a pronounced alkalinity — than the batch inoculated at 5% w/v. That could result from rapid rate of cell growth and availability of nutrients in culture. Such variations in pH profile were also observed in cell suspensions of various species (24). Growth and pH follow the same performance, which is also in accordance with the model applied. 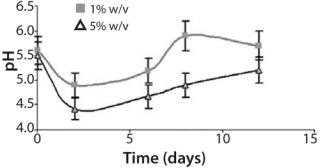 Figure 4 shows the dynamics of the population age for 1% and 5% w/v inoculum sizes and the subsequent prediction of antibody r14D9 accumulation. According to the model, we assumed that proliferating cells produce the recombinant protein. Expression of r14D9 began on the fourth day, when cell proliferation ends, continued up to the tenth day (1% inoculum size) or eighth day (5% inoculum size), and then abruptly decayed. The mathematical model calculated with the dividing and nondividing cell populations (LOG + GIP + destroy 1%, model calculation in Figure 4) matches experimental data. Maximum r14D9 was produced at lower inoculum size, an experimental result predicted by the model. 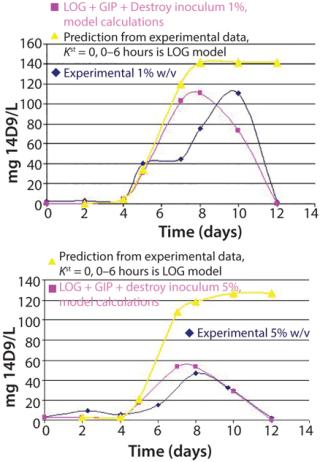 Recombinant antibody accumulation seems to be time-dependent, although expression is under the constitutive promoter CAMV 35S — as was reported for plant, organ, tissue, and cell cultures (10, 11, 23, 24). Antibody decay could be due to degradation of recombinant protein by proteases, loss of tertiary and quaternary antibody structure, or antibody adsorption by the glass of the vessel (11, 12). By contrast, recombinant protein is produced upon initial entering into stationary phase when protease activity is incremented. This proteolysis could explain the abrupt loss of recombinant protein at the end of the cultures.

Figure 5 shows the SDS-PAGE and Western blot of a biomass extract from the batch inoculated with 1% w/v. Under nonreducing condition, it is shown as a single band corresponding to the r14D9, with a molecular mass of about 150 kDa (Figure 5A). That antibody size corresponds to the assembled IgG with both expected chains (γ2κ2) (11, 23). Results under reducing and nonreducing conditions revealed that the r14D9 was correctly assembled (Figure 5B).

Performance of the N. tabacum in vitro cultures expressing the recombinant antibody 14D9 (Ab-KDEL line) was analyzed when transferred from 225-mL Erlenmeyer flask to a 2-L bioreactor. The best performance of the N. tabacum in vitro cultures expressing the antibody r14D9 in a 2-L bioreactor corresponds to the culture initiated with the lowest inoculum size (1% w/v) as the mathematical model predicts. The proposed modeling approach for cultivation of plant cells using a structured model reflects the real dynamics of changes in the age structure of cell populations in the batch cultivation. Separation of the growing cell population based on physiological age into two groups — dividing cells and stable cells (nondividing) — allows for application of a structured model for scaling up from bench scale to a phytofermentor. Processing data obtained during cultivation and according to the structured model provides the opportunity for deeper understanding of the dynamics of changes occurring in cell populations, accurate prediction of both the dynamics of biomass growth and biosynthesis of a target protein or metabolite, and significant reduction of the cost of improving cultivation of cells on an industrial scale.