A number of biopharmaceuticals are enzymes that act in vivo on high-molecular substrates. It can be a challenge to develop in vitro methods for accurately assessing their biological activity. Interest is also developing in using enzyme kinetic parameters as product quality attributes under the quality-by-design (QbD) initiative.

Among biotechnology therapeutics, the conventional method of expressing potency is in units/mg of biopolymer. For enzymes, a unit of activity was defined in 1958 by the International Union of Biochemistry and Molecular Biology (IUBMB) as 1 µmole of substrate per minute under specified assay conditions (1). Since then, the term katal (kat) has been adopted by International Union of Pure and Applied Chemistry (IUPAC) as a unit of enzyme activity (2). A katal is defined as 1 mole substrate per second. The IUBMB unit of enzyme activity as defined above is thus 16.667 × 10−9 Kcat (3).

Acceptance of the katal has been less than universal. Irrespective of the nomenclature, the activity of an enzyme is a function of its affinity for substrate(s), its ability to convert substrate(s) into product(s), and its ability to release product(s). Activity may be expressed by the following equation (4), where v is the observed velocity (reaction rate), V is Vmax, [S] is substrate concentration, and Km is the Michaelis–Menton constant, in which v equals

That describes a simple reaction such as that represented by hydrolysis, in which the second reactant (water) is in overwhelming molar excess. Although it is clear that measurement of biological activity and its subsequent expression in units is a critical quality attribute (5), it is less clear that changes in kinetic constants such as V, Kcat, kat, or Km (KS) would be useful as quality attributes. But performance of an enzyme assay is not trivial, and concern must be given to experimental conditions and instrumentation to obtain accurate results.

Thrombin As an Example

It is relatively easy to obtain kinetic constants for low–molecular-weight substrates with reaction rates measurable by, for example, spectrophotometry. But some scientists are concerned about the validity of such nonbiological substrates for use as surrogates for the biological/therapeutic activity of biopharmaceutical enzymes. Thrombin is an excellent example. It is one of the oldest biotherapeutic products (6), used originally (and currently) as a hemostatic agent and as a component in fibrin sealant (7), which is a combination product. 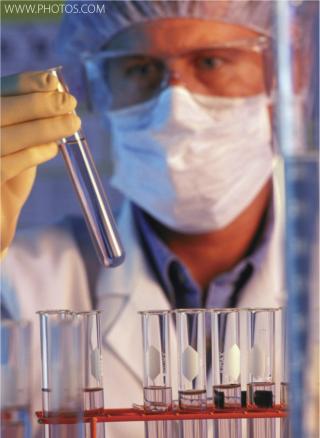 The biological or therapeutic effect of thrombin is based on its conversion of fibrinogen to fibrin — and somewhat less on the aggregation of platelets involving cleavage of a platelet membrane receptor. Conversion of fibrinogen to fibrin involves cleavage of the alpha (α) chain of fibrinogen with the release of fibrinopeptide A and the later cleavage of the beta (β) chain with release of fibrinopeptide B leading to formation of the fibrin monomer. Kinetic parameters for those reactions are well understood (8). A fibrin clot is formed from the polymerization of fibrin monomer to form a complex network. And the physical formation of this complex network (the fibrin clot) is the end point for most thrombin assays, as measured by visual inspection or an increase in viscosity.

Thrombin activity as measured for biological potency of a licensed product is based on the clotting of fibrinogen expressed in either NIH units or International units (9). Thrombin can also hydrolyze peptide nitroanilide and ester substrates. That can provide data inconsistent with fibrinogen clotting because esterase and amidase activity can be retained when fibrinogen-clotting activity is lost (10,11). So with thrombin, there seems to be no alternative to using a biological substrate.

Once known as spreading factor, hyaluronidase is used in cosmetic surgery and as a adjunct for drug delivery (12,13,14,15). It degrades hyaluronic acid, a high–molecular-weight glycosaminoglycan found in connective tissue and joint fluids by hydrolyzing β-N-acetylhexosaminic bonds (16). Associated assay methods are complex but provide good data (17), and other methods are being developed (18,19). The activity of current therapeutic products (from both animal and recombinant sources) used in devices and as a free-standing therapeutic is determined by the amount of undegraded hyaluronic acid remaining after digestion for a predetermined period, usually 20 minutes at 37°C (20). Enzyme activity also can be used as a measure of molecular integrity of hyaluronidase (21).

Carboxyl proteases are another example (22). Fujiwara and colleagues studied the effect of pressure on the catalytic activity and conformation of two pepstatin-sensitive carboxyl proteases (porcine pepsin and proteinase A from Baker’s yeast) and two pepstatin-insensitive carboxyl proteases (pseudomonapepsin and xanthomonapepsin). Activity was determined with an octapeptide fluorescent substrate and acid-denatured myoglobin. Increasing pressure causes a decrease in Kcat/Km for pseudomonapepsin and xanthomonapeptide, whereas greater loss of activity was observed with pepsin and proteinase A from Baker’s yeast. There was little effect on the hydrolysis of acid-denatured myoglobin by any of the four proteinases. Conformation change was observed with fourth-derivative spectroscopy. Thus a difference is seen in response between the biological and synthetic substrates.

Use the Best Measurement

Biological substrates are the most accurate measure of activity for a therapeutic enzyme; however, they are complex substrates not easily amenable to the application of rigorous enzyme kinetic analysis. I would submit that there are more facile approaches for obtaining data satisfactory for enzyme characterization.

Larner and colleagues showed that the oligosaccharide acceptor chain length influenced the activity of glycogen synthase (23). They used the metrics of S0.5 and Vmax. S0.5 is a value analogous to Km in that it is a substrate concentration at ½ Vmax, S0.5 is usually used for cooperative enzyme systems but would also be useful for the study of enzymes with substrate heterogeneity (24). In this case, it is critical to standardize the substrate.

The assay used to test for the presence of prekallikrein activator (activated Hageman factor or factor XIIa) is also used for evaluating plasma protein products (25). Current technology, however, uses a peptide nitroanilide substrate with an international standard (26,27). To the best of my knowledge, that synthetic substrate has not been validated with the biological assay based on kinin release (28). The assay (biological assay) required preparation of a standardized crude substrate from plasma as a source of prekallikrein (29). An issue also arises with enzymes that degrade biopolymers when the substrate changes during the enzymatic reaction — such as, for example, with cellulose. Approaches have been developed for analysis of those reactions (30). Heterogeneity is important for some therapeutic enzyme function (debridement) and for cell dissociation in processing (31).

Most data would suggest that although smaller synthetic substrates provide for more facile assays, they do not necessarily measure the biological (therapeutic) activity of a biopharmaceutical enzyme. So their use should be validated against the biological substrate. It has been suggested that validation of such synthetic substrates occur in the initial stability testing of a product when assay data can be correlated with physicochemical data (32,33,34).

For the characterization of therapeutic enzymes that work on complex substrates, I suggest the use of metrics such as S0.5 and Vmax instead of Km (KS) and Kcat. A complex substrate must be prepared using a reproducible process that is subject to validation. Small synthetic substrates must be validated with respect to their physiological substrates to serve as true surrogates. International standards (whenever possible) and especially pharmacopoeial methods should be used.