The biopharmaceutical industry is targeting high-concentration protein formulations to enable subcutaneous administrations. Such administration can provide better patient convenience than intravenous administration. One challenge associated with high-concentration formulations is increased electrostatic interaction between proteins and excipients. That is a result of increased protein-charge density at high protein concentrations. Such interactions can create an offset between excipient levels in final products and diafiltration buffers in ultrafiltration processes. The effect of such electrostatic interactions in a membrane process is known as the Donnan effect. 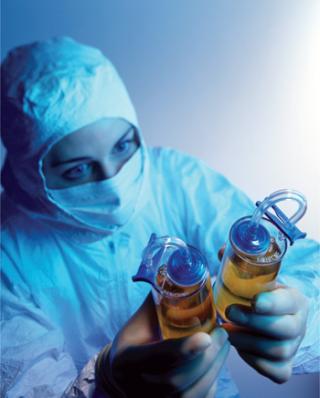 The Donnan effect on excipient levels has received significant attention in recent years. Theoretical modeling has been developed to predict excipient and pH changes as a result of the Donnan effect in monoclonal antibody (MAb) processes. One model based on the Poisson–Boltzmann equation provided good prediction of excipient levels in the final retentate pool (1). A second model developed by Bolton et al. demonstrated to be predictive for basic MAb and acidic Fc-fusion proteins (2). The latter study also included several mitigation strategies to achieve target levels of excipients at the end of an ultrafiltration–diafiltration (UFDF) process. Both publications provide tools for understanding the influence of the Donnan effect on target formulation excipients. By contrast, our study focuses on the influence of the Donnan effect on removal of starting buffer excipients during diafiltration.

A typical final-formulation UFDF step will target eight to 10 diavolumes. For an ideal process, in which excipients pass freely through the membrane (the retention value R = 0), 10 diavolumes provide 99.995% removal of starting excipients. That equates to a “complete” exchange (Figure 1).

The Donnan effect, however, can influence that removal. We performed several test runs to demonstrate how the Donnan effect changes the removal efficiency of positively and negatively charged excipients. We conducted diafiltration test runs using a MAb at two different concentrations to additionally assess the influence of MAb concentration on excipient removal efficiency.

Protein: We used SAN-300, a MAb provided by Santarus Inc., for the diafiltration studies. It is a glycosylated IgG1 monoclonal antibody directed against VLA1 (very late antigen-1, α1β1 integrin). The protein is expressed by a Chinese hamster ovary (CHO) cell line and purified using a standard three-column MAb purification process. SAN-300 protein has pI >8 with a molecular weight >140 kDa.

UFDF Procedure: We perfomed all tests at room temperature (21 °C) using EMD Millipore Ultracel (regenerated cellulose) 30-kD membranes in 88-cm2 Pellicon 3 devices installed in a Pellicon Mini cassette holder. We ran diafiltrations at a transmembrane pressure (TMP) of 20 psig. The retentate was continuously stirred and recirculated through the system using a peristaltic pump. We performed initial concentration steps as needed to achieve the desired SAN-300 test concentration. Feed flow rate was 4.5 L/min/m2 for the runs. Table 1 provides a summary of the test matrix.

We measured the negatively charged excipients EA– and EB– using a special electrolyte for indirect UV detection of excipients, including a modifier to remove electroosmotic flow. We used a fused silica capillary (ID = 75 µm) and performed indirect detection at 200 nm. For both methods, we calculated concentration levels using the standard addition method.

RValue: We calculated the apparent retention of the excipients using (see Equations box). N is the number of diavolumes.

The first combination consisted
of a positively charged MAb, a negatively charged starting excipient (EA–), and a negatively charged diafiltration excipient EB–. Figure 2 shows the results as Runs 1 and 3. In that figure, the black line plot shows removal efficiency for a system in which excipients pass freely through the membrane with no effect from charge interactions (99.995% removal in 10 diavolumes). Removal efficiencies for EA– at 55g/L (Run 1) and 120 g/L (Run 3) were comparable to solutes with apparent retention values of Rapp = 0.419 and Rapp = 0.770, respectively. As Table 2 shows, when those results are compared with an excipient that passes freely through the membrane, seven additional diavolumes at 55 g/L protein concentration or 33 additional diavolumes at 120 g/L protein concentration would be needed to achieve a 99.995% removal. 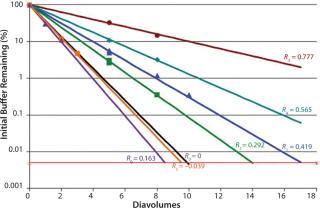 We obtained similar results from the second combination, which consisted of a positively charged MAb, a negatively charged starting excipient EA–, and a positively charged diafiltration excipient E+, which corresponds to Figure 2, Runs 2 and 4. The negatively charged starting excipient EA– behaved as a partially retained solute with an apparent retention of Rapp = 0.292 at the 55-g/L test condition. At the 120-g/L test condition, apparent retention increased to Rapp = 0.419. For that case, a 99.995% removal would require 14 diavolumes at 55-g/L protein concentration or 23 diavolumes at 120-g/L protein concentration — compared with 10 diavolumes for an excipient that passes freely through the membrane (Table 3).

Results showed that the removal efficiency of charged excipients during a diafiltration step was influenced by the Donnan effect. Excipients that had a charge that was opposite of the charge of the protein experienced electrostatic attractive forces, thereby partially retaining the excipient. That was demonstrated by the negatively charged excipient EA– and the positively charged MAb protein. By contrast, excipients with the same charge as the protein (e.g., positive– positive) experienced repulsive forces. For those cases, the excipient experienced enhanced removal comparable with a solute that passes freely through a membrane. Tests with E+ excipient and positively charged MAb demonstrated that result.

Because one objective of a final UFDF step is to provide a buffer exchange, process development scientists often target eight to 10 diavolumes under the assumption that process excipients pass freely through the membrane. Furthermore, optimum diafiltration concentration is typically based on hydraulic considerations (e.g., Coptimum = Cgel/e) (3).

To illustrate, we calculated membrane area requirements for diafiltration of the EA–/ E+ excipient combination (EA– removal using E+ diafiltration excipient) (Table 3). Calculations were based on a starting volume of 100 L at 55 g/L MAb, a diafiltration time of three hours, and a 99.966% EA– removal (Table 5). 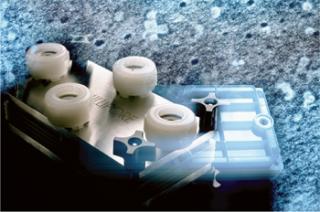 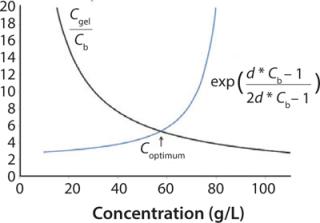 Process development scientists should consider excipient removal when designing diafiltration steps. The required number of diavolumes to achieve excipient removal will depend on the extent of the Donnan effect, which is a function of protein concentration, protein charge, and excipient charge.