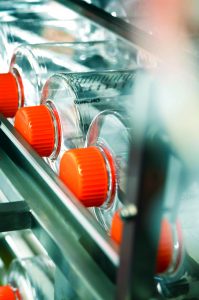 In the past 20 years, novel therapeutics have become a major segment of biopharmaceutical research and development, particularly for immune disorders and cancer. Progress in gene therapies could bring cures for once deadly and debilitating genetic disorders such as hemophilia or muscular dystrophy. Biologic drug products offer potential treatments that have not been possible with traditional (chemistry-based) approaches. But such products also are more difficult to produce cost effectively at an industrial scale because of the intricacies associated with biological host agents. Biopharmaceuticals are associated with complex biological machineries, sensitivity to heat and shear stresses, difficult characterization, and challenging identification of naturally occurring and process-related molecular variants (1).

The US Food and Drug Administration (FDA) defines biologic drugs as those “isolated from a variety of natural sources – human, animal, and microorganisms . . . and [that] include a wide range of products such as vaccines, blood, and blood components, allergenics, somatic cells, gene therapy, tissues, and recombinant therapeutic proteins” (2). This description differs from that of traditional small-molecule drugs produced through chemical synthesis and with well-defined molecular structures.

Small-molecule drugs are produced industrially in vessels in which defined reactions take place at preset operating conditions (e.g., pressure, temperature, and pH) to yield molecules with a predictable outcome. Bioreactors are vessels with controlled environmental conditions used to grow living cells that are genetically programmed to express desired biomolecules as part of their living metabolism at an industrial scale.

However, that is where the comparison to a chemical process stops. The behavior of living cells is complex and challenging to predict because of the thousands of cascading and interlinked intra- and intercellular chemical reactions. Cells are highly sensitive to minute changes in their environment (e.g., temperature, pH, hydrodynamic conditions, osmolarity, presence, and concentration of metabolites). This characteristic creates particular challenges when it comes to changes in process scale. A process developed at laboratory scale must take into account industrial-scale process environments for successful scale-up.

The sterility required to carry out a defined biological process also places operational constraints on the feasibility of process steps. Thus, much smaller working volumes are used typically in bioprocessing than in small-molecule processing. Modern chemistry can be traced back to the 17th century (3) — whereas DNA was discovered in 1953. Our knowledge of biological processes has a long way to go to reach the level of understanding we’ve acquired for industrial chemistry.

After bioreactor production, a desired drug substance must be extracted and purified from cell culture before it can be formulated into a drug product for human use. The purification steps needed to achieve required purity make use of unique characteristics of each biologic and can be highly complex and low yielding. As a result, biologic drug products often are expensive to produce, financially burdensome for healthcare systems, and ultimately limited in accessibility to patients. Accessibility can be increased by

Cells used to produce biologics grow and reproduce in either suspension or adherence. In the former, cells live and reproduce suspended in a liquid medium, and in the latter, cells need a physical matrix to attach onto and multiply. In either case, cells must be supplied with growth medium adapted to their metabolism to ensure their growth and production of an intended product.

Although such practices suited the markets for which they were developed, they are poorly adapted to the production needs of more recent biologics, which require small bioreactors and multipurpose facilities. Stainless steel vessels offer little flexibility (e.g., in instances of multiproduct manufacture), require large capital investment (both in building and equipment), and are expensive to maintain. Because of the long lead time for a traditional stainless-steel facility, investment must be made at risk early in a drug development process.

To address those problems, new-generation bioprocessing equipment and facilities implement single-use systems, components of which are discarded at the end of a production run. Single-use systems allow more flexibility in facility layouts and operations because the design includes less piping and fewer fixed connections. Such designs ultimately have a significant effect on facility construction costs. The result is known as a “ballroom” facility concept in which a facility’s process area is filled with equipment that can be wheeled easily in and out and can be readily configured to changing production needs.

Adherent Cell Culture Solutions
On the opposite end of the cell culture spectrum are adherent cells. These are ubiquitous in the production of viral vaccines (human and veterinary) and viral vectors for gene therapy and immuno-oncology. The following adherent cell lines have established industrial applications: Vero cells for polio, rabies, rotavirus, Japanese encephalitis, and smallpox vaccines; MRC-5 and WI-38 cells for rabies, hepatitis A, and varicella (4); Chinese hamster ovary (CHO) cells for hepatitis B vaccines (5); human embryonic kidney (HEK)-293 cells in gene therapy for the expression of a wide range of vectors (6); baby hamster kidney (BHK)-21 cells for the foot-and-mouth disease vaccine (7); and Madin-Darby canine kidney (MDCK) cells for influenza vaccines (8).

The culture of adherent cells has been slower to innovate than its suspension counterpart. Roller bottles were the first scalable system for growth of these cells. When supplied with media, roller bottles provide a two-dimensional surface for cells to grow onto. The bottles are placed inside incubators that ensure even distribution of nutrients and appropriate gas exchange. However, such a system is scaled out rather than scaled up: The only way to increase production is to increase the number of bottles (and incubators, manual operations, and facility space) — a solution that quickly becomes costly both in terms of infrastructure and operations. Roller-bottle systems also have been associated with an increased risk of batch failure because of contamination from manual operations.

Another two-dimensional approach for growing adherent cells is multilayer cell culture trays such as Cell Factory (Thermo Fisher Scientific) and HYPERStack (Corning) systems. They work on the same general principle as roller bottles but provide increased surface area per unit volume, which reduces the need for incubators and associated facility space, but not labor.

Microcarriers (microscopic beads or discs onto which cells can attach and grow) have been developed to address the problem of surface area versus volume for large-scale adherent cell culture production. Microcarriers with cells attached are suspended in liquid media, so cells can be cultured in agitated bioreactors. Although microcarriers provide a large surface area for adherent cell growth, a microcarrier-based process can be time-consuming and complicated to develop and run primarily because of the number of preculture steps required to get to final cell mass.

The most recent innovation in adherent cell culture is the introduction of scalable, single-use fixed-bed bioreactors. They provide a fabric matrix (a fixed bed) for cells to attach to and grow compactly while allowing a perfusion of culture medium through their structures to ensure appropriate provision of nutrients and gas to cells. This technology has a number of advantages over those systems above (9):

Fixed-Bed Reactor for Production of Viral Vaccines
Adherent cells have widespread use in the production of viral vaccines. Cultured cells are infected with the virus of choice, which subsequently is either attenuated or killed before the harvested material is formulated into a vaccine dose. Market demands for vaccines are in the hundreds of millions of doses per year (13). Production methods need to be adapted to meet demand and reduce production costs.

Given the evolution of vaccine production, many companies are locked in to legacy production technologies. Eggs, for instance, are still a common substrate for production of some vaccines such as for the seasonal influenza vaccine and those for measles and mumps (4). Although roller bottles still have widespread use in the bioprocess industry, they are not well adapted to the scales required for vaccine supply and to the pressure on costs driven by public health authorities. For cases in which rapid production is required (e.g., the 2013–2016 West African Ebola virus epidemic), older methods such as in roller bottles are not suitable for cost-effective production (14). Fixed-bed reactors allow both quick process development and production of industrial quantities of material. They can be adapted to existing infrastructures or integrated into new ones (15).

Fixed-Bed Reactor for the Production of Viral Vectors
Viral vectors are used in gene therapy production to transfer or replace a gene in a targeted cell using a vector to reach a required location in the cell. The ability of viruses to enter a cell and change its genome is harnessed to this effect, allowing a desired genetic package to reach its target location using the virus as a transporter (vector).

Gene therapy is promising and often quoted as the medicine of the future. But it is currently very expensive for three reasons:

A small patient pool size makes a drug product more expensive because the cost of efforts to take the drug from discovery until its commercial launch will have to be spread across a smaller number of doses or patients. Although the latter cannot be changed, commercial manufacturing choices can reduce production costs significantly. Requiring a large number of viral particles per patient makes traditional production methods (e.g., roller bottles and cell factories) inadequate for industrial production. Bioreactors are the only solution for cost-effective manufacture (17). For therapeutic applications with large patient groups (e.g., treatments for hemophilia, muscular dystrophy, Alzheimer’s or Parkinson’s diseases), traditional production methods are not suitable (18). Industrial, scalable technologies are required.

Modern Approaches Needed
Vaccines have been produced industrially for more than 70 years. Existing labor-intensive processes with high capital expenditure infrastructure will continue to exist until they are replaced by modern production techniques. By contrast, gene therapy is emerging as a medical solution to treat a number of diseases. As of December 2017, only one in vivo gene therapy had received FDA approval, with a cost established at nearly US$1 million per patient (19). But more gene therapies are under clinical development and targeted to reach the market in the near future. The bioindustry has an opportunity to implement modern production methods to allow successful manufacture of gene therapies at required scales and at affordable costs to both healthcare systems and patients, ultimately increasing patient accessibility.

3 Chalmers AF. Boyle and the Origins of Modern Chemistry: Newman Tried in the Fire. Studies in History and Philosophy of Science. 41(1) 2010; 1–10.

15 Drugman J-C, et al. How to Change the Paradigm to Offer a Polio Vaccine for All and Eradicate Poliomyelitis. Univercells, Lausanne, 2017.