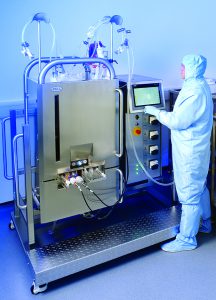 The increasing role and importance of cell culture in biophamaceutical manufacturing has led to considerable research and development (R&D) into bioreactor design and performance in recent years. As a result, a greater understanding of bioreactor fluid dynamics and critical physical parameters is now essential to maximize cell growth and productivity. Stirred-tank bioreactors are especially important in this development process because of their favorable properties in areas such as mixing efficiency and homogeneity, energy transfer, and scalability.

The design and manufacture of single-use bioreactors is another major area of R&D. The objectives have been to achieve and (when possible) improve fluid dynamics and cell culture performance of stainless steel systems but in a single-use, presterilized format. This alternative technology also offers product developers an opportunity to create and manufacture innovative designs not achievable with multiuse cleanable systems. That can provide unique benefits to users and offer process enhancements (1).

In a previous publication (2), we described the design features of a single-use, 200-L, stirred-tank bioreactor (Photo 1) based on a customized, cubical biocontainer with internal baffles and a large, direct drive, pitched impeller with three blades. Data from our studies on the bioreactorâ€™s fluid dynamics showed that the system could provide

Having established that the fluid dynamics satisfied critical requirements for mammalian cell culture, we carried out further studies to evaluate its cell culture performance using a Chinese hamster ovary (CHO)-S cell line and its comparative performance and scalability for cell culture studies against traditional stirred-tank bioreactors. Herein we present study results and the signficance of those results showing 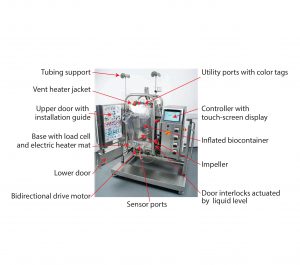 Single-Use BioreactorÂ DesignÂ andÂ Functions
These studies used a Pall Allegro STR 200 bioreactor. Full details of the single-use components and associated hardware are described in a previous publication (2) and in detailed product information published by Pall (3). So we briefly summarize the design features here.Â Figure 1 shows the complete assembled system, and the box summarizes its main components and functions. 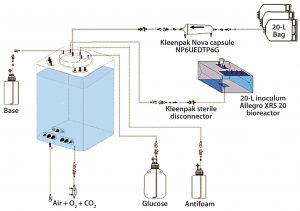 Studies on Cell Culture Performance
After we established that the engineering and fluid dynamics of the Allegro STR 200 single-use bioreactor met the requirements for mammalian cell culture (2), we carried out further studies to evaluate cell culture performance. Those studies were designed not only to measure cell growth rate and viability, but also to generate comparative data from a conventional, cleanable, stirred-tank bioreactor. That way, we could establish whether a single-use system could offer comparable performance and scalability to a multiuse system.

Experimental Set-Up: Figure 2 shows the set-up for our study. Full experimental details are available in a separate publication (4), so we summarize only the main components and practical details as follows: 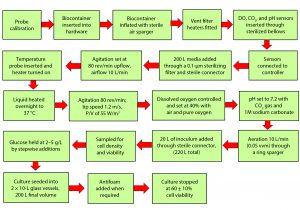 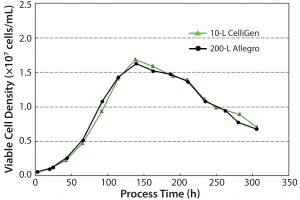 Cell Growth: Figure 4 shows viable cell density profiles for the 10-L and 200-L bioreactors. The following conclusions could be drawn from the data: 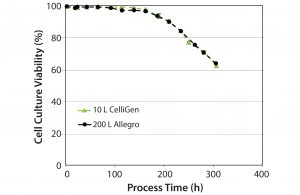 Culture Viability: Figure 5 shows culture viability profiles for the 10-L and 200-L bioreactors. We obtained similar profiles at both the 10-L and 200-L scales. For the Allegro STR 200 bioreactor with an agitation speed of 80 rev/min, a P/V power value of 55 W/m3 (5), and calculated tip speed of 1.2 m/s, results showed high cell densities and viabilities, indicating no evidence of cell damage.

With results of the cell growth studies, we concluded that the single-use Allegro STR 200 bioreactor produces culture profiles comparable with those of a conventional multiuse bioreactor, and it is scalable up to 200 L. 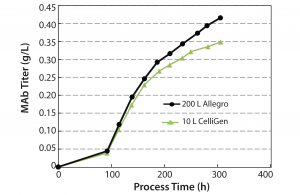 MAb Production: In addition to conducting studies on cell growth profiles, we investigated bioreactor productivity by measuring MAb titers (Figure 6). The mean titer at the end of the culture period for the CelliGen bioreactors was 0.35 g/L compared with a slightly higher titer of 0.42 g/L for the Allegro bioreactor. Results for productivity established that the single-use system could achieve equal or better MAb titers for batch sizes â‰¤200 L. 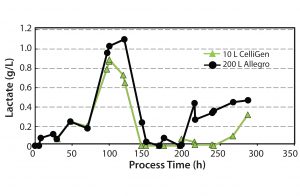 Cellular Metabolism and Control of pH: We investigated cellular metabolism by monitoring levels of lactate and glucose. Lactate accumulation can lead toÂ acidification of the media, whereas consumption of lactate usually correlates with an increase in pH. By measuring pH, we can establish whether the bioreactors were able to effectively manage control of pH, which is vital in maintaining cell growth and viability.

Figure 7 shows lactate levels measured. Lactate levels showed significant variations throughout the culture period for both types of bioreactor. Despite those variations, pH control (set with a deadband of 0.05 units) efficiently maintained the set point of 7.2 Â± 0.1 at both the 10-L and 200-L scale. 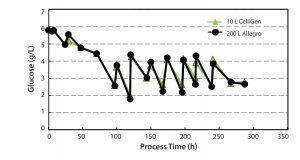 Control of Glucose Levels: Glucose was the primary nutrient for the CHO cell cultures. Effective control of glucose levels was a critical parameter to evaluate in our studies. We set glucose
concentration level at 2â€“5 g/L and controlled it by regular step additions throughout the culture period. Figure 8 shows that glucose concentrations were controlled to the required levels at both the 10-L and 200-L scale.

Performance Summary
In earlier studies (2), we measured a range of critical parameters and established that a single-use stirred-tank bioreactor could provide necessary fluid dynamics for mammalian cell culture, including

Studies reported herein were designed to establish whether such physical attributes could provide equal or betterÂ cell culture performance to a conventional multiuse bioreactor as well as scalability up to a 200-L capacity. CHO-S cell culture studies showed that for the Allegro STR 200 single-use bioreactor, cell density and viability, MAb productivity, pH control, glucose consumption, and lactate profiles were all within the expected performance parameters for the CHO-S cell line. This performance was equal to or better than that obtained with the CHO-S cells in a conventional 10-L glass multiuse bioreactor. Data also confirmed full scalability to 200 L for the single-use bioreactor.

One of the most challenging requirements when designing single-use bioreactors has been the need for high-power transfer capacity. Our studies have shown that the direct-drive, elephant-ear impeller of the Allegro STR 200 bioreactor could generate high P/V power values of 310 W/m3 (2, 5). That feature can provide considerable flexibility in control of cell culture conditions and could be particularly valuable in applications requiring high cell densities or viscosities.

We hope this performance qualification data for the Pall Allegro STR 200 bioreactor will be helpful in operations where the introduction of single-use bioreactor technology into new processes is being considered or where replacement of existing stainless steel systems is under review. The data may also help reduce lead times for implementing a single-use system and for providing supporting documentation for validation and submission to regulatory authorities.

By assessing other factors such as process costs, operational flexibility, sterility assurance, and utilities, you can make an informed decision on whether single-use bioreactors such as the Allegro STR 200 unit provide significant process improvements in mammalian cell culture and offer a beneficial alternative to stainless steel, cleanable systems.