Most biopharmaceutical production platforms are based on fed-batch cell culture protocols, which can support high volumetric productivity while maintaining low operational complexity (1). The industry is interested in developing or refining high-titer cell culture processes to meet increasing market demands and reduce manufacturing costs (2). Although advancements in cell engineering have enabled development of high-performing recombinant cell lines (3,4,5,6), improvements in cell culture media and process parameter settings are required to realize the maximum production potentials of those cells (7,–8).

In a fed-batch process, a basal medium supports initial growth and production, and a feed medium prevents depletion of nutrients and sustains the production phase (9). Those media can contain different assortments of nutrients to accommodate the distinct metabolic requirements during different production phases. Process parameter settings — including feeding strategy and control parameters — define the chemical and physical environments suitable for cell growth and protein production. Optimization of a fed-batch process can be achieved by development efforts addressing one or more of three major elements: basal medium, feed medium, and process settings. Given the large sets of variables in these systems, establishing a cost- and time-efficient approach for process optimization is desired but challenging.

Through a study aiming to upgrade a fed-batch process, we observed that basal and feed media have interrelated impacts on process outcomes (a “pairing effect”). So we required a combined optimization of basal and feed media to fulfill our objective. Here we discuss a rationally integrated approach that best serves the practices of fed-batch cell culture process optimization.

Existing Fed-Batch Cell Culture Process: Development of the existing control fed-batch process has been detailed elsewhere (10). Briefly, a chemically defined medium was chosen as the basal medium, and a chemically defined feed medium was developed through a multiround statistical design of experiment (DoE) study. The process was successfully applied to both NS0 and CHO cell cultures. 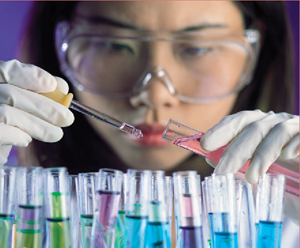 Optimization of the Process: We conducted our optimization studies using either shake flasks (Corning) or Cellferm-Pro bioreactors (DASGIP BioTools). Cells were adapted over at least three passages into the test medium variants before evaluation in cell growth performance assays. Initial bioreactor culture volume was 500 mL. We controlled pH at 7.0 ± 0.05 and dissolved oxygen (DO) at 30%. Culture conditions followed the existing control process except for our designed variables. We measured cell densities and viabilities using a Vi-Cell counter (Beckman Coulter) and measured concentrations of glucose, ammonia, and lactate with a BioProfile analyzer (Nova Biomedical). We determined monoclonal antibody titers using a POROS 20-µm protein A ID cartridge affinity column (Life Technologies) controlled by a Waters 2695 Alliance system with 2998 photodiode array detector set at 210 nm (Waters), using a purified IgG standard to establish the standard curves in each measurement.

Baseline Performance of the Control Process: We assessed our existing control process using the model cell line to establish baseline performance. As Figure 1 shows, the fed-batch process reached a peak viable cell (vc) density of 19 × 106 cells/mL, and the batch process (run as a control without feeding) had a peak viable cell density of 7 × 106 cells/mL. The feed in this process demonstrated a high baseline performance by yielding an 8.5-fold titer increase over the batch control process. The IgG titer from our fed-batch process reached the multigram per liter range, which is regarded in the industry as high for a platform process. 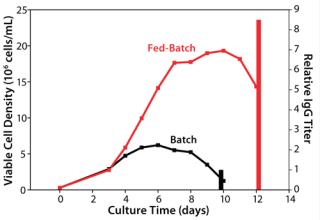 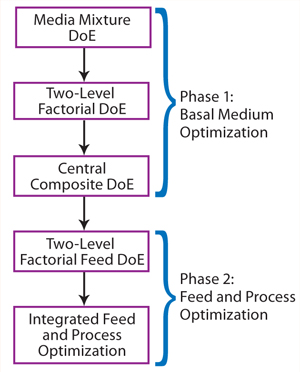 We conducted basal medium optimization through three steps of DoE experiments. First, we used a media mixture DoE study to identify a basal medium formulation as a starting point for medium optimization. Our second step was a two-level factorial DoE study testing the effects of multiple nutrient groups supplementing the basal medium. The final step was a central composite DoE to determine the optimal concentrations of functional nutrient groups identified in the previous step. 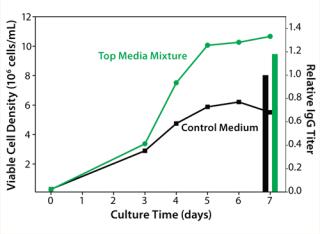 In our two-level factorial DoE study, we selected five nutrient groups to evaluate how they affect protein titer when used as basal medium supplements at two concentrations (added or not) to the top media mixture. We designed a total of 16 basal medium variants with various combinations of those five nutrient groups and assessed them in a fed-batch cell growth performance assay using the existing control feed for all conditions.

As Figure 4 (LEFT) shows, the cell cultures exhibited a wide range of growth responses to supplementation of the nutrient groups. Multiple supplemented media supported higher peak cell densities than the control condition. However, their boosted cell growth did not translate to a gain in IgG titer; none of the medium variants improved IgG titer over the control (Figure 4, RIGHT). That was contradictory to the previous batch culture evaluation of media mixtures in which improved IgG titers were observed, suggesting that the feed may have been playing a dominant role in IgG production for this process. Furthermore, statistical analyses of the results revealed that two nutrient groups had a negative effect and one nutrient group had a positive effect on IgG titer (p < 0.05).

In a central composite DoE study, we regrouped select nutrient groups and tested them at five different concentrations encompassing a wider range than our two-level factorial study. We designed 15 medium variants for evaluation of three nutrient groups. All variants were tested in a fed-batch growth performance assay to which the original control feed was applied. As Figure 5 shows, this round of optimization improved cell growth; however, that did not translate into increased IgG titer.

Cell growth was largely improved through basal medium optimization. By contrast, IgG-specific productivity — which characterizes average productivity per cell — was drastically reduced (data not shown). So an increase in titer was not achieved. Optimally in a fed-batch cell culture process, the basal medium supports cells through their growth phase and thus plays a major role in cell growth, whereas the feed medium sustains cells through the production phase for a primary contribution of increasing IgG productivity. When basal medium optimization improved cell growth, we hypothesized that a corresponding feed optimization would be required to increase the IgG titer of our fed-batch process. Further, we hypothesized that process parameters might need to be altered to realize the full potential of our new medium and feed combination.

Feed Optimization: In this project, we optimized feed by testing nutrient groups as supplements to the existing feed. We selected five nutrient groups for screening at two levels: high level (with supplements added back to the control feed) and low level (the control feed without supplementation). A total of 17 feed variants reflected different combinations of supplementing the nutrient groups. In the fed-batch cell growth performance assay, we seeded all conditions in the same basal medium (the top medium identified in phase 1), feeding each one with the designated feed variant.

As Figure 6 shows, multiple test conditions outperformed the control fed-batch process with regard to IgG titer, with the top condition demonstrating a 15% increase. This improvement suggested that the fed-batch process may benefit from the pairing effect described above. The control feed was originally developed to specifically match the original basal medium, which gave a high baseline performance (11). After basal medium optimization, feed modification became necessary to better match the new basal medium for superior process outcome. We conducted statistical analyses and identified two nutrient groups with significant positive effects on IgG production (p < 0.05).

Our final study was an integrated feed and process optimization. We designed five feed variants to test different concentrations of nutrient groups identified as having a significant positive effect on protein titer in our previous experiment. Using a fed-batch growth performance assay, we tested these variants in conjunction with multiple process parameters: seeding density, feeding schedule, and temperature shift. We seeded all conditions in the same basal medium, feeding each condition with the designated variant under different process settings.

As Figure 7 depicts, this round of integrated optimization further improved IgG titer, with the top condition 40% higher than the control fed-batch process. This titer improvement could be primarily linked to increased IgG-specific productivity (data not shown); the accompanying cell growth augmentation was only marginal. This study involved an integrated optimization combining both feed and process optimization in one step. Although feed development and process optimization are usually addressed in separate studies, this integrated approach can be used to deliver superior results in a shortened period.

Basal medium, feed medium, and process parameter settings are the three major factors for fed-batch cell culture process optimization. Performance can be improved by upgrading one or more of those three elements. In phase 1 of our study, extensive basal medium development efforts improved cell growth in a fed-batch process, but IgG titer did not increase because specific productivity decreased. Subsequent feed optimization in phase 2 promptly indentified a modified feed that better matched the new basal medium developed in phase 1 and outperformed the original fed-batch control process with regard to IgG titer by restoring specific productivity.

The benefit of pairing basal and feed media supports the idea that the two have interrelated impacts on cell culture performance. An upgraded basal medium can induce notable changes in the growth and metabolism of cells and therefore may require an accordingly modified feed to accommodate the nutrient demands of those cells. For fed-batch process optimization, improving a single element may be insufficient to improve the overall process outcome and require development efforts on the other elements. Optimization of all three elements in our fed-batch process was necessary to realize its maximal protein production potential. As Figure 8 shows, protein titer increases were not seen in this study until basal and feed were optimized in tandem. 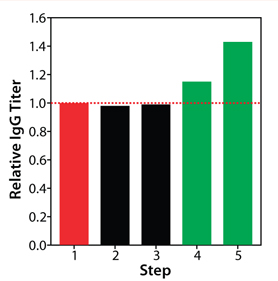 All three elements can be optimized in different ways. The most straightforward, serial approach sequentially optimizes basal medium, feed medium, and process settings. However, that overlooks the nature of networked interactions among the three elements and thus may not guarantee an optimal outcome. An iterative optimization, in which sequential optimization of one or more elements is repeated until desired results are reached, can further propel a process toward its optimal point (4). However, that approach prolongs development timelines. As a more sophisticated strategy, a fully integrated approach with simultaneous optimization of all three elements is ideal for identifying the globally optimal condition. However, implementation of the fully integrated optimization is challenging because of the many experimental conditions required, which can be on the order of thousands and exceed current development capacity.

The Best of Both Worlds

Because the basal medium, feed medium, and process parameter settings have interrelated roles in a fed-batch process, optimization of all three elements may be required to maximize process outcomes. A fully integrated strategy with simultaneous optimization of all elements would allow for process optimization within a shorter timeline than a sequential approach requires. However, implementing a full integration can be challenging because of the required large set of experimental conditions. As an alternative, rationally integrated approaches can be designed and used to overcome those limitations and deliver desired results for fed-batch cell culture process development.