Metabolic process engineering (MPE) was developed at Bristol-Myers Squibb Company as a tool to effectively control and optimize industrial cell culture processes used for production of biological drugs. A fundamental need was identified to introduce manipulations to the metabolism of production cell lines without genetic engineering. Optimization goals for production cell line performance include, for example, volumetric productivity, control of product quality attributes and by-product formation, and improved process scalability. With MPE, we could achieve targeted changes to cellular metabolism through timed addition of chemicals to a production process.

Here we describe the MPE concept and provide examples of its use. We made two further observations when applying it: Well-understood, scientifically based changes to the production process had the highest chance of meeting product comparability needs, thus facilitating regulatory approval. And poorly understood, empirical approaches carried the risk of introducing undesirable variability into process performance and changes to product quality attributes. 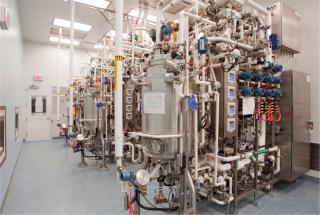 A seed reactor at Bristol-Myers Squibb in Devens, MA ()

The opportunity to use the techniques described herein narrows when entering the commercialization phase of a biological drug. Furthermore, regulatory expectations are constantly increasing with regard to the level of expected process understanding, especially the required knowledge behind proposed changes. Our company therefore determined that a tool needed to be developed that would provide intrinsic process understanding while assisting process developers in meeting their desired optimization goals.

MPE has similar goals as the well-known concept of metabolic engineering (3), but it achieves them through timed addition of chemicals to a production process rather than the use of genetic engineering. Figure 1 presents the concept step by step. First, identify your goal for a desired production cell line performance change. Collect and analyze knowledge from key metabolic pathways, metabolic flux analysis, and scientific literature (including medical publications) to form a hypothesis for a potential mode of action. Next, attempt a targeted manipulation of your production cell line’s metabolism through addition of selected candidate chemicals to the production process. Finally, verify successful results through measurement of metabolic parameters using, for example, enzymatic or chemical analysis, metabolomics, and/or transcriptomics. 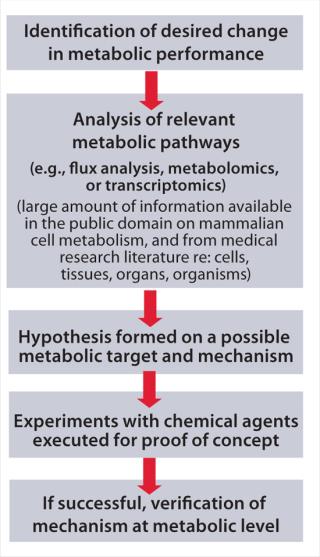 Production cell lines usually have weaknesses that affect overall process performance. However, such cell lines have been used in manufacturing, where they define the biochemical and physicochemical characteristics of a biological drug. The goals for a change in cell-line performance may be

Areas that can be researched for potential targets of cell metabolism include bioenergetics, cell signaling, target protein expression, stress reduction, membrane renewal, and others. Enzymes, receptors, signaling compounds, and metabolic flux are all potential metabolic targets.

Candidate chemicals may serve as effectors, precursors, traps, or receptor blockers. Those chosen for evaluation need to fulfill certain criteria for use in industrial cell culture processes. They must not be nutrients, proteins or peptides, or animal derived. They must be nontoxic and economical in pricing. And they must not lead to performance trade-offs. Such trade-offs are observed, for example, in the use of sodium butyrate (14), with which a higher observed cell specific productivity is tied to reduced cell growth.

For MPE, high-throughput screening experiments are set up to evaluate candidate chemicals. Concentration and timing of additions to the culture also play a crucial role. To achieve a desired process performance change, several chemicals affecting different metabolic targets may be combined to improve overall effectiveness.

He
re we present four examples of the MPE in application. These examples address process optimization goals in the areas of

Example 1 — Control of By-Product Formation: Lactate formation is generally regarded as detrimental to mammalian cell culture (14, 15), in which increases in culture osmolality can lead to cell death. We observed higher lactate formation was observed during scale-up of cell culture processes to industrial production scale (Figure 2). We considered an obvious metabolic target for manipulation: lactate dehydrogenase (LDH) activity. However, suppressing such activity involved significant performance trade-offs. So we focused instead on overall efficiency of the pyruvate flux and cellular energy charge. 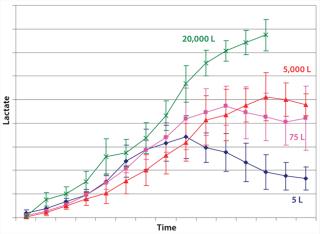 We hypothesized and confirmed that lactate can be remetabolized through LDH activity with achievement of a higher flux of pyruvate into the tricarboxylic acid (TCA) cycle. We accomplished this by increasing the activity of a key enzyme in the electron transport chain (ETC). Figure 3 illustrates the increased activity of an ETC key enzyme when chemical A was added. Figure 4 describes the immediate reaction of cells to timed addition of chemical A and the resultant decrease in culture lactate levels. 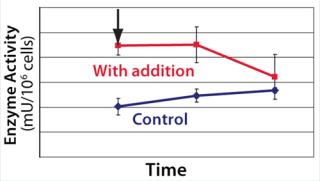 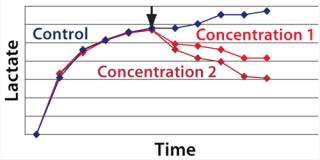 Example 2 — Control of Product Quality Attributes: A further challenge during scale-up of highly glycosylated biological drugs is control of protein glycosylation characteristics (14). We observed a decrease of the content of a specific monosaccharide in the glycosylation pattern during scale-up to industrial production scale. This change affected the pharmacokinetic properties of the protein product. Several metabolic targets were identified. As Figure 5 shows, the timed addition of chemical B increased the level of a key nucleotide in the intracellular pool. That higher level then enabled comparability of the protein glycosylation pattern from development to production scale (Table 2). 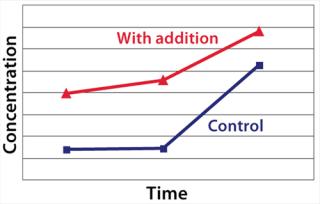 Table 2: Decrease of monosaccharide #3 and associated reduction of serum half-life was observed during process scale-up; addition of chemical B restored monosaccharide #3 level and pharmacokinetic properties. ()

Example 3 — Volumetric Productivity Increase through Cell-Specific Productivity: The physiological limit of a cell to produce, for example, monoclonal antibodies (MAbs) (qPmax) was estimated to be 175 pg per cell each day, based on an assumed ribosomal speed (RSmax) of 8,000 MAbs/cell each second synthesized (16). We calculated qPmax by assuming an antibody molecular weight (MW) of 150 kDa and using the formula qPmax = RSmax × MW ÷ Avogadro’s Number. Currently reported cell-specific productivities are below that theoretical maximum (17), so we focused on evaluating metabolic pathways that could improve target protein production. We identified a critical pathway connecting glycolysis and TCA and screened a number of candidate chemicals for their effectiveness. Figure 6 shows how a key enzyme connecting the two central metabolic pathways was elevated in its activity with chemical C present. And Figure 7 demonstrates a significant increase in cell-specific productivity when chemical C was added to the production process. 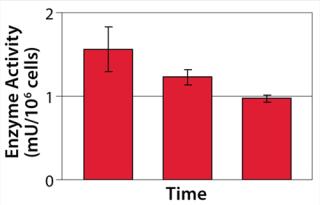 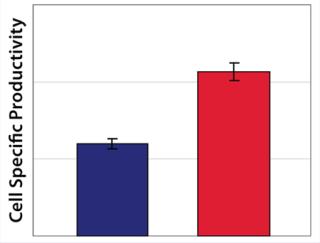 Example 4 — Volumetric Productivity Increase Based on Cell Viability Profile: One of the easiest ways to increase volumetric productivity of a cell culture is to extend the viability of product-producing cells already present. This strategy offers other benefits, particularly in regard to maintaining similar viral and impurity levels at harvest as well as comparability of product quality attributes. We evaluated a number of candidate chemicals for their ability to delay cell apoptosis. Figure 8 demonstrates that timed addition of chemical D reduced the onset of DNA laddering, a measure of the apoptotic state of cultured cells (18). Figure 9 illustrates how timed addition of chemical D to the process significantly improved the cell viability profile. 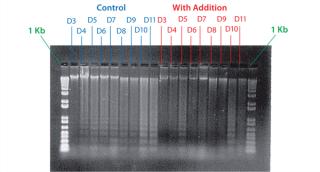 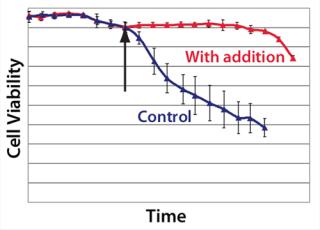 We have found MPE to be an effective tool for solving many typical process challenges encountered during late-stage and postcommercial product phases of development.