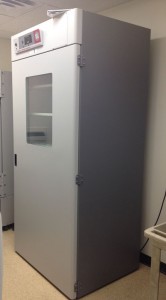 MicroProtein Technologies Inc. has developed the MPTxpress high-yield, lowâ€‘cost, recombinant Escherichia coli manufacturing platform. Rather than using liquid culture media within stirred bioreactors, the system uses trays filled with semisolid (gelled) culture media overlaid with or without a permeable membrane on which the E. coli is cultured. Compared with conventional liquid fermentation platforms, the MPTxpress system reduces the number of steps in up- and downstream processing and required infrastructure, significantly improves yields, and lowers costs. It provides simplicity for mixing and upstream bioprocessing free of connections, tubing, and piping. The first commercial products being developed using this platform are protein A resins with improved acid and base stability and the ability to be recycled (e.g., over 100 times).

MicroProtein is the only company working to produce recombinant biologics at commercial scale without conventional fermentation (stirred liquid culture media). The company received the 2012 Frost & Sullivan Award for Technology Innovation for development of the MPTxpress platform.

In the MPTxpress platform, cells are cultured in 1-ft2 plastic trays that hold a thin layer of gelled culture media, with or without a semipermeable membrane laid on top and with E. coli seeded and cultured on that layer. The system works with both soluble protein and inclusion body expressions. Seeded trays are stacked in a conventional incubatorâ€“ isolator cabinet, with circulating filtered air at room temperature for one day (a shorter time than for conventional fermentation). Scale-up is simple, rapid, reliable, repeatable, and inexpensive â€” just add more trays and cabinets (identical bioreactors in parallel).

Harvesting is also simple: This involves scraping peanut-butter-consistency E. coli growth off the membraneâ€™s surface. This process provides a highly concentrated cell paste, without the usual need for clarification, centrifugation, filtration, and so on. For example, 100 g of cell paste typically contains as much as 80 g (80%) of biomass. By contrast, conventional liquid media harvest cell paste contains 70â€“80% water. 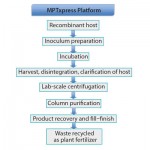 Figures 1aâ€“b compare MPTxpress and conventional E. coli fermentation processes. The charts show the fewer steps and simplicity of the MPTxpress platform, usually with only a single chromatography step required.

A single 1-ft2 tray can provide up to 1.4 g of recombinant protein. Each tray typically yields up to 7 g of dry cell weight/ tray, with specific yield up to 200 mg/g (20%), with 1 g/tray more common. Comparable amounts of protein are attained using about one-fifth of the culture media volume of conventional fermentation. In classic terms of volumetric yield (g/L of culture media), this amount can provide much higher yields than most conventional liquid fermentation E. coli platforms. 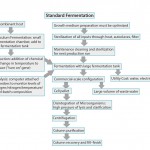 Dr. Pandiripally (president of MicroProtein Technology) noted that, “The MPTxpress platform provides high yields, including the highest percentage of specific yield (mg/g dried cell weight) in the industry.” Comparable conventional production of 1 kg of recombinant protein would require multiple seed-train bioreactors, with a final run in a 200-L bioreactor (if at 5 g/L) or a 400-L bioreactor (if at 2.5 g/L). The amount of required time, space, utilities, labor, culture media, and costs would be much greater

The platform is more efficient and robust than traditional liquid fermentation processes. It provides more consistent and controlled processing (compared with processing at extremes, which requires constant monitoring and control), with faster turn-around times, consistently higher yields, and lower production costs, and milder and contamination-free processing. These advantages allow for production of more consistent products and reproducible per-batch yields. The MPTxpress platform is also portable, so whole facilities can be readily clonable.

The solidified culture media used is fully sterile (autoclaved) with media-containing trays. By contrast, powdered culture media is handled exposed to open air and is not sterilized (with heat or gamma irradiation) (1). “Sterile” filtration before filling bioreactors removes contaminants only down to the bacterial level, leaving viruses and mycoplasma. Conventional bioreactor seeding relies on overwhelming numbers of cells from a seed train of bioreactors, which add complexity, costs, risks, and time, whereas MPTxpress culture can use cells from a single incubated tray.

MPT has received patents, including US 7,229,792 and has pending applications broadly covering MPTxpress protein expression and harvest in solid media. Trade secrets include aspects of the culture media, membranes, genetic constructs, and harvesting.

Facilities using the MPTxpress platform do not face the complexities and costs associated with traditional fermentation systems (see the “Advantages” box). Proteins expressed from the platform are typically purer and otherwise of higher quality, presumably because of the more natural, less extreme, and rapid processing. Cells growing undisturbed at room temperature have a more stable, natural, less stressful environment, than those in conventional fermentation. Traditional systems involve energetic mixing (shear) at elevated temperatures for longer periods, with higher accumulation of toxic by-products, cell debris, variant structure proteins, and aggregate formation.

MicroProtein is developing “MPTxpressed” recombinant protein A resins. The resins have significantly improved performance over those produced with traditional methods. They have a tolerance for caustic exposure (e.g., 1 M NaOH) and can be recycled over 100 times â€” more than conventional protein A resins.

MicroProteinâ€™s MPTxpressed protein A differs from conventional products in terms of having minor peptide sequence modifications at both the N- and C-termini, with a purity â‰Ą98%. Resulting agarose and other resins have much higher stability.

Instability at extreme pH (including leaching of protein A from resins) currently limits the number of times that traditional protein A resins can be recycled. Such resins are also expensive (US$6,000â€“ $17,000/L), and for a 1-m column (such as for kilogram-scale monoclonal antibodies) costs can be over $1 million. The ability of resins to withstand extreme pH and be recycled are major factors in their costs and related costs for antibody manufacture.

MicroProteinâ€™s protein A-agarose resins have a dynamic binding capacity (DBC) of ~34.5 mg/mL at four minutes residence time. In one study, protein A-agarose resin was exposed to 1 N NaOH for 40 hours (comparable to ~400 cycles with 30 minutes CIP every fifth cycle). The dynamic binding capacity (DBC) of the resin was reduced by only 18% (23â€“18 mg/ mL). Also, there was no significant decrease in resin DBC after purification/CIP for 300 cycles with 1 N NaOH solution. No current commercial protein A resins come anywhere close to having this extreme caustic tolerance. By comparison, the current resin market leader, MabSelect SuRe from GE, has a comparable DBC of â‰Ą30 mg/mL and a caustic tolerance of 0.1 N to at best 0.5 N NaOH (significantly higher than most other current products but not close to the tolerance of MicroProteinâ€™s resin). The current leading resin product also has a high list price of $16,000/L. MPTxpressed protein A will cost less to manufacture than conventional fermentation-derived protein A, and the company expects to market its much-improved protein A resins at prices similar to or lower than current leading products. Resins from the MPTxpress platform are more robust, recyclable, and highly cost-effective. We expect them to rapidly gain significant market share.

The MPTxpress E. coli manufacturing platform combines classic solid agar-solidified culture media simplicity with modern recombinant methods. It appears suitable for development as a highly cost-effective platform for manufacture of most any protein that can be expresssed using E. coli. The company is developing protein A resins as its first products at large scale. Those resins have demonstrated a much improved tolerance for pH extremes with extraordinary recyclability.