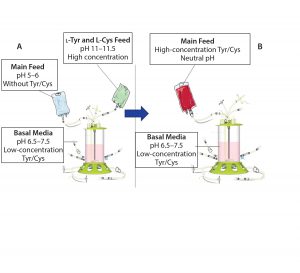 Figure 1: Traditional feeding strategies rely on a main feed and a separate alkaline feed containing l-tyrosine and l-cysteine (A). This study demonstrates the use of a combined main feed with high concentrations of tyrosine and cysteine derivatives at neutral pH (B).

A neutral pH feed is desirable because culture pH should remain stable after feedings. The extremely low solubility of l-tyrosine and the low stability of l-cysteine at neutral pH have necessitated processes that leverage a slight acidic main feed and a separate alkaline feed containing these essential amino acids. Use of separate feeds at different pH levels creates the need for complex control strategies to minimize pH spikes during feed additions. In bioreactors, the alkaline feed can be added slowly while pH is monitored continuously and proportional-integral-derivative (PID) settings are adjusted to reduce CO2 sparging response to spikes in pH. In large-scale manufacturing, even with slow addition of feeds, precipitation is likely to occur after contact with neutral pH media, especially when residual foam is present. 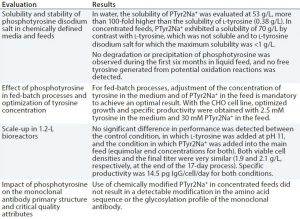 Tyrosine
Depletion of l-tyrosine in fed-batch processes has been correlated with a decrease in specific productivity and protein sequence variants (3, 4). l-tyrosine
has an extremely low solubility and is difficult to dissolve when concentrations of tyrosine disodium salts >1 g/L are used. Such high concentrations further increase the risk of media instability, mainly through coprecipitation of other amino acids. That can lead to insufficient supply of nutrients and less-than-robust processes (data not published).

To address the challenge presented by tyrosine and eliminate the need for a separate alkaline feed, we evaluated the use of a phosphotyrosine disodium salt (PTyr2Na+) as a source of l-tyrosine in chemically defined, neutral pH feeds for CHO fed-batch processes. Table 1 shows our key results. 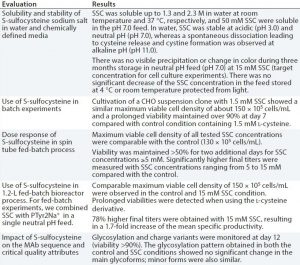 Cysteine
Low stability of cysteine results from dimerization and precipitation of l-cystine at neutral pH and 25 Â°C. ThisÂ also is critical for fed-batch processes. As with l-tyrosine, an alkaline feed containing l-cysteine is used commonly, presenting similar challenges with precipitation and pH spikes. Because l-cysteine is not stable at neutral pH, we tested a new derivative, S-sulfocysteine sodium salt (SSC) in neutral pH feeds with a CHO cell line expressing a human MAb. In SSC, the highly reactive thiol group of cysteine is blocked by a sulfate group, which lowers the moleculeâ€™s reactive potential toward metals such as copper and iron and oxidation. Table 2 summarizes key results. 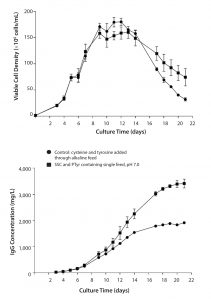 Figure 2: Comparison of culture duration and titer using a single-feed strategy with PTyr2Na+ and SSC versus a separate cysteine/tyrosine alkaline feed (pH 11); data are represented as mean Â±SEM with n = 4 replicates for each condition.

We also explored possible mechanisms leading to the increased titer when using SSC. Intracellular labeling with carboxy-H2DCFDA demonstrated a decrease in reactive oxygen species (ROS) in the cells obtained in the SSC-containing process, pointing out to antioxidative mechanisms.

We performed microarrays on mRNA of CHO cells extracted at different time points in the fed-batch process. The gene showing the highest upregulation in the SSC condition compared with the control coded for SOD-2. Superoxide dismutases catalyze conversion of superoxide radicals to H2O2 and O2 and are known to decrease intracellular ROS levels (5). The enzymes may be partly responsible for the lower intracellular oxidative potential observed in CHO cells.

Cysteine is a key sulphur source and is the limiting factor for synthesis of glutathione (GSH), the main intracellular antioxidant. Although microarray studies showed no change in expression of enzymes involved in GSH synthesis, CHO cells cultured in the presence of SSC had an increased pool of total glutathione. That may help explain their longer culture duration as a result of several described mechanisms (6â€“8). The higher intracellular free glutathione pool may be linked to increased protein folding in the endoplasmic reticulum of those cells, where an oxidizing environment isÂ necessary to add disulfide bonds into the protein (9). That can result in a higher secretory rate â€” and ultimately, a higher titer.

Finally, one main advantage of SSC is that the highly reactive thiol group of cysteine is protected, thus limiting the interaction of the molecule with other cell culture media components such as metals. SSC also is less susceptible to oxidation than cysteine. This contrasts with the most commonly used cysteine derivatives or prodrugs such as GSH, cysteamine, or N-acetylcysteine, in whichÂ the highly reactive thiol group is free to interact with other media components.

Advantages
MAb manufacturing depends on high-concentration nutrient feeds, which can lead to high titers and sustain specific productivity throughout the culture. Use of phosphotyrosine disodium salt and S-sulfocysteine sodium salt as components of chemically defined, neutral pH, highly concentrated feeds provides an alternative to the commonly used separate cys/tyr alkaline feed. The advantage of the approach summarized here is that it can be incorporated into existing strategies to simplify fed-batch processes in large-scale manufacturing and improve overall process performance.