HEK293 and CHO cells are two widely used hosts for TGE (4). The former produce significantly higher levels of recombinant protein than the latter in most such processes (5). That has led to widespread use of HEK293 as a more common host for transient transfections. But multiple cases have shown that quality attributes can be different for products from HEK and CHO cells (4, 6). That raises concerns about the suitability of material for developmental work when generated in a different host cell line from what would be used for clinical manufacturing. Hence, many efforts are under way to develop a robust and scalable CHO-based transient transfection process.

A number of approaches have improved transient transfection yields with CHO cells (4, 7,8,9). One strategy involves generating engineered CHO cell lines such as CHO3E7 expressing EBNA1 protein and CHO-T cell lines expressing large T antigen (10). Those cell lines were reported to maintain transfected plasmids episomally, which provided for transgene expression (TGE) over time. The presence of cis-elements — such as OriP or SV40 Ori — specifically inserted into the expression vector backbone allows for episomal maintenance of a transfected plasmid.

High-yielding transient transfection methods have been reported (4, 11). Transfecting high-density cultures, pretreating cells with dimethyl sulfoxide (DMSO), and culturing cells under hypothermic conditions after transfection have increased production yields. Efforts also have been made — with limited success — reporting suspension adaptation of CHO-K1 for large-scale transient transfection (9, 12, 13). With increasing application of TGE in the biopharmaceutical industry, however, higher yields and improved protocols are clearly required. 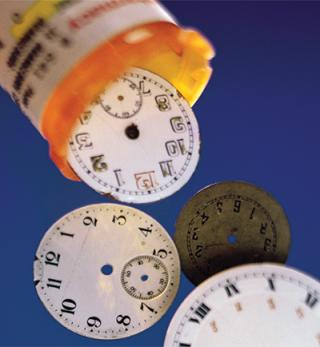 We have generated a high-yielding transient transfection platform based on suspension-adapted CHO K1 cells for generating recombinant proteins. This new platform has produced ~160 ± 20 mg/L of therapeutic antibody 10 days after transfection. For a number of various nonantibody proteins, we found that this process expressed product at levels either similar to or higher than what was expressed by HEK293-FS cells.

Plasmid DNA: For this study, we used plasmid DNA that expresses a therapeutic, chimeric, IgG1 monoclonal antibody (MAb). The light and heavy chains of the antibody are cloned in two different plasmids. For monitoring transfection efficiency, we used an enhanced green fluorescent protein (EGFP) expression plasmid. Our developmental experiments involved a heavy-chain plasmid, a light-chain plasmid, and an EGFP plasmid in a premixed ratio of 45:45:10. Our comparison study (with HEK293-FS cells) used DNA with a 50% heavy-chain and 50% light-chain plasmid ratio.

We cultured Freestyle CHO-S cells in Gibco Freestyle CHO media supplemented with 8-mM glutamine. HEK293-FS cells from Invitrogen grew in 293 Freestyle medium supplemented by 0.1% Gibco PF-68. We maintained cultures routinely in 125-mL Erlenmeyer flasks from Corning with 30-mL working volumes on a shaking platform from Kuhner AG at 125 rpm. We passaged these cells three to four times per week so that maintenance cultures would have densities in the range of 0.2–2.0 million cells per milliliter of medium.

Transient Transfection: One day before transfection, we seeded 0.5–0.75 million CHO-KS cells/mL with >96% viability. On the day of transfection, cell density is usually 1.0–1.3 million cells/mL. We used either PEImax (from Polyplus Sciences) or Freestyle Max (from Invitrogen) transfection reagents, with 1 µg of DNA/mL of culture to be transfected. We used a ratio of DNA to transfection reagent of 1:1 (w/v) for the latter and 1:6 (w/w) for the former reagent in all experiments unless otherwise mentioned.

On the day of transfection, we separately diluted the required amount of DNA and transfection reagents in 5% of the culture volume of OptiPRO SFM medium from Invitrogen. Then we mixed together the content of both tubes and incubated the mixture for 10 minutes at room temperature. Finally, we added DNA complex dropwise to cells cultured in CO2 incubators set at 37 °C on a 125-rpm shaking platform. Four hours later, we added an in-house nutrient feed to the transfected cells and put them in an incubator maintained at 32 °C.

Protein Analysis: We determined antibody concentration in culture supernatants using an Octet Red interferometry system from ForteBio using protein A sensors according to the manufacturer’s protocol. We measured the concentration of purified protein by absorbance at 280 nm and the GFP signal with a FACscan flow cytometer from BD Biosciences.

Antibody Purification and SDS-PAGE: Antibody was purified through a protein A affinity drip column. Briefly, we loaded clarified broth onto the protein A resin bed. After performing a wash step with phosphate-buffered saline (PBS), we eluted the sample using 0.1-M glycine buffer at pH 3.0, then neutralized with 1-M Tris at pH 8.0. We used a NuPAGE Bis-Tris precast gel from Invitrogen to analyze the resulting protein samples.

Antibody Production Through Transient Transfection in Suspension-Adapted CHO-K1 Cells: We set out to develop a CHO-based transient transfection platform for protein production. As a first step, we adapted serum-dependent CHO-K1 cells into chem
ically defined serum-free media. As also reported by others, we also found that for some cases in which suspension adaptation was successful, the medium could not support transient transfection (4, 14). That indicates the importance of your choice of growth medium for successful transient transfection. We identified at least three candidate media that would support robust growth and antibody production through transient transfection (Figure 1B), each capable of producing 15–25 mg/L of chimeric IgG1 antibody. No centrifugation step or pretreatment was performed before transfection, and we used 1 µg (50% HC, 50% LC) DNA/mL of culture volume.

We compared antibody production in transiently transfected CHO-KS cells with Freestyle CHO-S cells from Invitrogen. Both were transfected using a DNA mix containing 45% HC, 45% LC, and 10% GFP. We kept all parameters the same except for the different cell lines and growth media. We harvested on day 7 and purified antibody from both cultures using a protein-A drip column. Then we ran the purified antibody on either reducing or nonreducing sodium–dodecyl sulfate polyacrylamide gel electrophoresis (SDS PAGE) (Figure 1A).

As the SDS-PAGE gel shows, CHO-KS and CHO-S both seem to produce comparable antibody titers. Quantification on harvested culture gave antibody titers of 43 mg/L and 46 mg/L, respectively. Those expression levels were similar despite the fact that Freestyle CHO-S has higher transfection efficiency (~50%) than does CHO-KS (~20%) (data not shown). This led us to believe that the CHO-KS platform has excellent cell-specific productivity.

Improvements of Expression Level and Transfection Efficiency in CHO-KS Cells: We established several process parameters (e.g., growth characteristics and nutrient consumption profile) for transient transfection of CHO-KS based on the cell line’s ability to readily adapt to the change in cell culture conditions. Figure 2 shows the effect of different process parameters on transfection efficiency (Figure 2A) and productivities (Figure 2B). We used a DNA mix (45% HC, 45% LC, 10% GFP) at 1 µg/mL of culture to transfect the cells and sampled them 48 hours afterward to identify GFP-positive (GFP+) cells using flow cytometry. Cultures were sampled on day 5, day 7, and day 10 after transfection for quantifying the antibody produced. Interestingly, under three specific conditions CHO-KS produced ~100 mg/L of antibody on day 7. The highest titers reached ~160 mg/L on day 10 (Figure 2A). Moreover, culturing CHO-KS under established process parameters showed higher transfection efficiencies of ~50–60% (Figure 2A). We chose the process that offered the highest expression levels for subsequent experiments.

Figure 2: Improvements in the CHO-KS transient transfection process; (a) GFP+ cells measured 48 h after transfection of CHO-KS cells cultivated under different process parameters; (b) antibody concentration at several time points as measured with a ForteBio instrument

To understand the individual effect of culture conditions on transient transfection product yield, we thawed a cryopreserved vial of CHO-KS and transiently transfected the cells in a 30-mL shaker using the conditions described above. After four hours, we distributed 4 mL of cells into each well of a six-well plate. As Figure 3 shows, we either shifted temperature alone or added one of two different feed supplements at the same time. Then we determined antibody production by the transiently transfected cells at several time points (Figure 3). 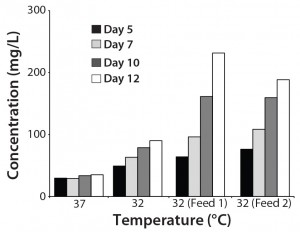 Compared with 37 °C, shifting the temperature to 32 °C clearly increased the transfection titers. Further, adding nutrient feeds enhanced those titers over 100 mg/L on day 7, and terminal titers reached >200 mg/L. These results are in line with a study in which growing CHO-DG44 cells under hypothermic conditions increased expression levels in transient transfections (15). Nutrient feeds further increase product titers, highlighting the utility of fed-batch production process for transient transfections. Taken together, our results show that the process described herein is a robust suspension CHO-KS process that requires no centrifugation or pretreatment of culture before transfection and yields volumetric titers >160 mg/L. 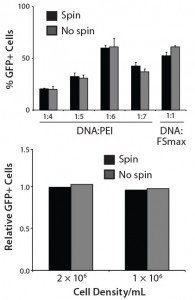 Figure 4: Characterization of transfection efficiency in CHO-KS cells; (a) GFP+ cells were measured using FACS 48 h after transfection, with or without centrifugation, using PEI or Freestyle Max reagents; (b) GFP+ cells were measured 48 h after transfecting CHO-KS cells either at 1.00 × 106 or at 2.00 × 106 cells/mL density, with or without centrifugation.

Characterization of the Transient Transfection Parameters: Previously described transient transfection protocols with suspension-adapted CHO-K1 cells required a centrifugation step and media-exchange at the time of transfection (12). Recently, a high-yielding protocol using CHO-DG44 cells also required a centrifugation and media exchange step for optimal performance (11). But spinning down multiple liters of cells before transfection is undesirable because as it complicates scale-up of transient transfection protocols and increases the potential for contamination and operator error.

We compared the transfection efficiency of CHO-KS cells with and without a spin step included, using PEI or Freestyle Max reagents. A day before transfection, we seeded 0.5 million cells/mL. The next day, they were either centrifuged down at 1,000 rpm for five minutes (and the resulting cell pellet resuspended in fresh media before transfection) or transfected without spinning down. We analyzed fo
r GFP+ cells 48 hours afterward using the FACS method (Figure 3A). The optimal DNA:PEI ratio remained 1:6 for these experiments. We observed similar transfection efficiencies with and without centrifugation, which shows that efficient transfection of CHO-KS could be achieved without it.

Finally, we compared the protein expression yields in transiently transfected CHO-KS and HEK293-FS cells for a number of diverse protein classes, including antibodies and nonantibodies. Cells were transfected and the conditioned medium harvested when viability reached ~60%. Accordingly, we harvested the HEK293-FS transfected cells on day 6 and the CHO-KS transfected cells on day 10. Under optimal conditions, the HEK293-FS cells were cultured throughout the experiment at 37 °C, whereas CHO-KS cells were shifted to 32 °C four hours after transfection. We observed that CHO-KS expressed either comparable or higher amounts of protein than did the HEK293-FS cells for a number of vector–protein combinations (Figure 5). That is importantly for a variety of vector and protein combinations, which demonstrates this to be a robust and scalable CHO-based transient transfection process for a broad range of applications. For example, A2-1 and A2-2 were the same protein cloned in different expression vectors. 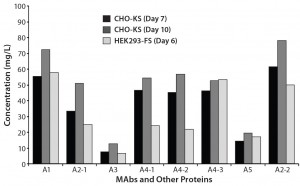 We report a high-yielding transient transfection platform for rapid production of therapeutic proteins and antibodies based on CHO-K1 cells. Under optimal transfection and cultured conditions, it produced ~200 mg/L of a human–mouse chimeric IgG1 antibody in 10 days. No centrifugation step is required by our transfection protocol, making it desirable for scaling up and transfecting large volumes of cells with ease. The CHO platform we worked with showed efficient performance using the two most widely used transfection reagents.

This new identified CHO process gives product titers either similar to or higher than those of HEK293-FS cells for a number of diverse proteins and vectors. Also, there doesn’t appear to be any dependence on specific expression vector configurations. We are optimistic that the CHO cell line and process described here will be a preferred choice in transient transfection capable of providing high quantities and qualities of candidate therapeutic proteins.

Author Details
Corresponding author Oren Beske is vice president of laboratory services; corresponding author Vishal Agrawal, PhD, is a scientist, and Bo Yu is a senior scientist, both in bioproduction; Rene Pagila is a scientist, and Billy Yang is a research associate, both in in protein purification and analytics; and Christian Simonsen is vice president and chief technology officer — all at Aragen Bioscience, 380 Woodview Avenue, Morgan Hill, CA 95037; 1-408-779-1700, fax 1-408-779-1711; obeske@aragenbio.com, vagrawal@aragenbio.com; www.aragenbio.com.