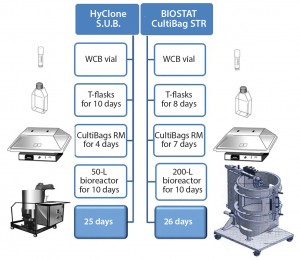 Follicle-stimulating hormone (FSH) is a heterodimeric glycoprotein consisting of noncovalently linked α and β subunits. It stimulates the growth of immature follicles in ovaries and primary spermatocytes in testes and thus plays an important role in human reproduction (1). Human menopausal gonadotropin for infertility treatment was first introduced into clinical practice in 1950 (2, 3). Subsequently, treatments with urinary FSH have been replaced by recombinant human FSH (rh-FSH), which has been shown to provide several advantages such as absence of luteinizing hormone activity, higher specific activity, and lower risk of infection (4).

The first commercially marketed rh-FSH was developed using a stainless steel vessel and a continuous perfusion system with serum-containing media (5). However, many biopharmaceutical companies are switching from such production systems to single-use (SU) bioreactors (6). That has been due to a wealth of manufacturing advantages of SU bioreactors, including fewer validation requirements, lower contamination risks, elimination of cleaning and sterilization steps, and rapid turn-around between batches, which leads to reduced preparation times (7). Such advantages have contributed to reduced capital cost by 40–50%, operating costs by 20–30%, and time-to-build by 30% when compared with conventional stainless steel vessel technology (8).

Materials and Methods
Upstream Processing (USP): A stably transformed CHO-DG44 cell line secreting rh-FSH was derived from a dihydrofolate reductase deficient (dhfr–) CHO strain (ProBioGen AG) using an efficient clone selection strategy and stepwise evaluation. It was grown in a suspension culture. Using our well-documented and validated in-house manufacturing process, production of rh-FSH was initiated with one vial from a fully characterized working cell bank containing 1.8-mL cell suspension. We thawed the CHO-DG44 cells and washed them to remove the cryopreservative then resuspended them in a 25-mL T-flask (Greiner Bio-One, CELLSTAR cell culture flasks) with animal-derived-component–free media EX-CELL CHO DHFR−ACF (SAFC, Sigma). We incubated the cells in a humidified 5% CO2 incubator at 37 °C (Heraeus HERAcell, Thermo Scientific). To expand culture volume, we subcultured cells with the same media every two to three days using T-flasks (25 and 50 mL) and disposable bags (10-L, 20-L, and 50-L CultiBags from Sartorius Stedim Biotech) until sufficient culture volume and cell numbers were reached to inoculate the final single-use bioreactor.

The initial cell count for the 50-L bioreactor process was 0.40–0.50 × 106 viable cells/mL and 0.25–0.35 × 106 viable cells/mL for the 200-L bioreactor. The pH was set at 7.2 (±0.1) and controlled by addition of 7.5% NaHCO3 (Sigma-Aldrich) and CO2. Dissolved oxygen (DO) was adjusted to a set point of 30% (±10%) and controlled by purging pure oxygen. We increased agitation speed gradually during the cultivation process until it was fixed on Day 4 at 120 rpm for the smaller 50-L SU bioreactor and 140 rpm for the larger 200-L SU bioreactor. We took daily samples for analyzing viable cell count and viability using a NucleoCounter (ChemoMetec). After 10 days, we harvested the culture supernatant containing rh-FSH with a disposable depth filtration unit (Pod Millistak, Millipore). The cell-free culture supernatant was then directly sterile-filtered through a single-use 0.22-µm PES filter into a disposable sterile bag (Millipore). The overall period for each upstream process using the 50-L single-use bioreactor was 25 days compared with 26 days for the 200-L SU bioreactor. 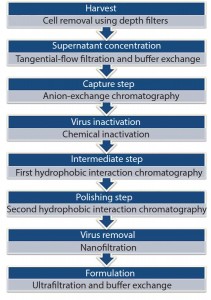 Downstream processing (DSP) of rh-FSH was a multistep procedure involving both buffer preparation in a single-use setting and DSP purification. Buffers were prepared in mixer bags (Millipore) and then filtered through 0.2-µm filters (Opticap XL, Millipore) into disposable bags (Mobius, Millipore). After cell removal, we processed the culture supernatant through seven sequential steps (Figure 2). Initially, we used tangential-flow filtration (TFF, GE Healthcare Life Sciences) with a total membrane surface area of 2.5 m2 (Millipore) to concentrate 200 L of supernatant 40-fold. We carried out buffer exchange using ammonium acetate with diafiltration to remove culture medium components and degraded proteins and to prepare the supernatant concentrate for chromatographic purification.

The rh-FSH downstream process included three chromatography steps for purification. Initially, supernatant concentrate was loaded on an anion-exchange (AEX) chromatography column using ÄKTApilot (GE Healthcare) as a processing device. For virus inactivation, we treated the AEX main fraction chemically by 60-min. incubation with solvent and detergent (S–D). This S–D-treated fraction was then prepared with high salt addition for loading onto the first hydrophobic-interaction column (HIC 1). Similarly, the main HIC fraction was prepared by adjusting its conductivity before loading on the second HIC column (HIC 2). The main HIC fraction from that column was filtered through a 20-nm membrane filter (Millipore) for virus removal.

The virus-filtered fraction was used for buffer exchange and final formulation by a TFF system (Millipore). Finally, we filtered the bulk using a 0.22-µm sterile filter before storing it at –80 °C as for the concentrated rh-FSH drug substance. The latter was thawed, diluted to final-dose concentration, filled, and lyophilized to generate final drug product. The rh-FSH concentrations in both the USP and DSP steps were determined using in-house validated high-performance liquid chromatography (HPLC) methods.

Results and Discussion
Comparison of scaling-up the rh-FSH production process between the 50-L and the 200-L single-use bioreactors showed a decline in cell viability and productivity at the larger scale. When the 200-L bioreactor was inoculated at the same seed-cell density as the 50-L SU bioreactor, the cell density reached maximum between Day 4 and Day 5 of cultivation but was followed by a sharp decline in cell viability at the end of cultivation (data not shown).

By contrast, when we seeded at a low initial cell count (which did not lead to high maximum cell density), viability did not decline sharply. Inoculation of the 200-L SU bioreactor with ∼50% of the seed-cell density of the 50-L scale resulted in similar cell growth curves in both with comparable product yields. We performed the rh-FSH upstream process three times at the 50-L scale and five times at the 200-L scale. All values shown here are the averages from the runs of each scale with the corresponding standard deviations (SDs). 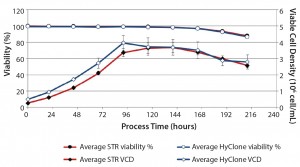 Figure 4: Comparison of rh-FSH protein quantifications in 50-L and 200-L SU bioreactors; (A) the rh-FSH concentration at day of harvest, (B) the specific cell productivity calculated for the period starting from Day 4 until the end of cultivation, and (C) total amount of rh-FSH protein produced from the upstream process secreted into the media

Fourfold scaling up of the upstream process allowed the optimum amount of our target protein to be loaded onto the chromatography columns. Consequently, individual chromatography yields had significantly increased. Ion-exchange chromatography (IEC) yield increased by 20%, HIC 1 yield increased by 17%, and HIC 2 yield increased by 3%. Those separate improvements in rh-FSH yields led to a significant augmentation of the cumulative yield for the downstream process by 79%. We calculated this increase by comparing the actual yields of both processes and taking into consideration the intermediate losses due to the load preparation of each step. Those losses are significantly lower at 200-L scale (presumably because of higher rh-FSH amount in intermediate fractions) and were reflected in the actual overall yields of both processes. Moreover, the individual purification steps generated strongly reproducible yields. That is demonstrated by SD for the step yields of the independently assessed 200-L SU bioreactor batches: IEC (SD = 0.79%), virus inactivation (SD = 0.87%), HIC 1 (SD = 3.25%), HIC 2 (SD = 2.29%), virus filtration (SD = 3.9%), and formulation (SD = 3.37%).

Comparatively, a typical downstream process of a recombinant protein production derived from a mammalian cell culture consists of three chromatography steps (9) and at least two steps capable of removing and/or inactivating enveloped viruses with orthogonal mechanisms (10).

Charles River Laboratories (Cologne, Germany) validated the ability of the Gonapure manufacturing process to efficiently remove and inactivate viruses. The cumulative log-reduction of enveloped viruses was >15 logs, and for the nonenveloped viruses it was >11 logs (data not shown). 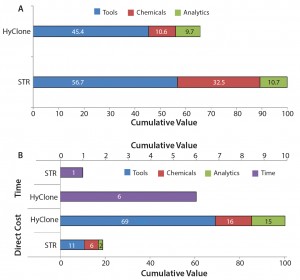 Economy of Scale and Cost Saving: Figure 6 shows cost calculations in a similar way to that published by Madeline (11). The figure illustrates the differences between the overall processes for the 50-L and 200-L SU bioreactors, including DSP. Numerical values in the bars highlight the importance of each item in a given process and allow for direct comparison of those values between processes.

Figure 6A shows that the direct variable cost of the 200-L SU bioreactor process is almost 1.5× higher than at the 50-L scale, mainly because of an increase in material and tool costs. Those costs were calculated by adding all items’ values in each bar and dividing the resulting 200-L process value with that of 50-L process.

Process scale-up from 50 L to 200 L resulted in more than fourfold increase in the rh-FSH protein produced from the upstream process. Optimization of individual purification steps almost doubled the final yield from the downstream process. Those outcomes led to an eight-fold accretion of purified material. Such a large increase in the final purified material from the 200-L SU process was translated into a steep cost reduction of 81% in the direct cost of each individual vial of drug product. Moreover, it decreased the time needed to produce a specific amount of active pharmaceutical ingredient (API) from the 50-L scale by sixfold, (Figure 6B).

Our findings clearly indicate that up-scaling to the 200-L USP contributed positively to the economics and cost efficiency of this process. And containment optimization of this USP allows accommodation of an additional production process in the same working area.

Optimized USP System
Rhein-Minapharm Biogenetics has developed the first manufacturing process based on a complete “disposable” upstream concept coupled with a robust and effective downstream process for production of CHO cell–derived rh-FSH. Moreover, the optimized rh-FSH process at a 200-L single-use bioreactor was in total 5.2× more cost-effective and six-fold more time saving than at a 50-L scale. Consequently, the manufacturing process using a large scale SU bioreactor can produce more than 1.5 g of pure recombinant human gonadotropin (Gonapure) — equivalent to 14 million international units (IU) — ready for supplying Egyptian market demands. Gonapure is offered in a sterile, lyophilized single-dose vial containing 75 IU or 150 IU rh-FSH with a diluent (sterile water for injection) to be reconstituted to a 1-mL dose.

Conflict of Interest
All authors state that they have no conflict of interest.

Acknowledgments
We thank Shaymaa El Taieb and Momen Amer for their contribution in earlier phases of development of the fermentation process as well as Mary Mounir Fahim and Marian Magdy for their efforts in DSP development. Further, we express our gratitude to Dr. Anthony Meager for his efforts in providing much supportive language editing.