Development of robust inoculum expansion procedures from cell banks is crucial to successful upstream manufacturing processes. Typically, vial thaw and cell culture expansion processes follow well-established procedures. Certain recombinant cell lines, however, need extra attention and development efforts to optimize conditions for robust and reproducible vial thaw and further subculturing. Difficulties in thawing frozen cells might be clone specific or could originate from suboptimal conditions during freezing. Such conditions might not be known initially and could need further optimization at a later stage. Growing and freezing cells under serum-free conditions in animal-component–free (ACF) or chemically defined (CD) media is desirable to meet regulatory requirements for therapeutic product development (1). However, certain cell lines might be more fragile to freezing techniques in ACF or CD freezing media. That could potentially lead to challenges in thawing and cell recovery as well as during initial cell passages.

WHO SHOULD READ: R&D, PROCESS DEVELOPMENT, AND MANUFACTURING

Here we describe a step-wise approach to develop a robust inoculum process (preculture) for fragile recombinant, human antibody–expressing Chinese hamster ovary (CHO) cell lines. We optimized multiple factors influencing cell revival, growth, and viability, and they may be used as a guide for improvement of cell recovery and inoculum expansion of other fragile cell lines. Although some precultures need optimization of all described parameters, incorporating one or two of these steps could be sufficient to boost healthy cell growth. 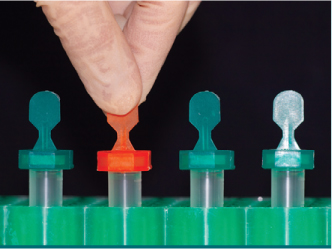 The clones described herein produce therapeutic monoclonal antibodies (MAbs), and the cells were banked in ACF freezing medium containing cryoprotectant dimethyl sulfoxide (DMSO) and conditioned culture medium. We initially used a standard thaw procedure in which frozen cells are quickly thawed by a 36.5 °C water bath and then added to 10 mL fresh medium, followed by centrifugation at 50g for five minutes before resuspension in fresh medium. The cells were then counted and seeded to a required cell density (centrifugation method).

After two to four days, we counted the cells again using the Trypan blue dye exclusion method before passaging them into fresh culture medium for a standard cell expansion (Figure 1). Using this standard thawing method, the cells did not recover with consistently high cell viability. In addition, we observed low cell recoveries and inconsistent growth patterns. Figure 2 represents the cell viability and growth profiles of one cell culture using the standard method (blue line) of reviving frozen cells. The initial cell viability of 65% never increased over 80%, and the cells could not be passaged based on the standard protocol. Passaging at earlier time points at lower cell densities also led to no reproducible cell growth pattern. 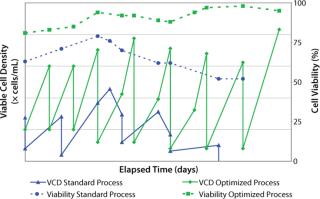 Based on those results, we investigated physicochemical (e.g., medium pH, concentrations of sodium bicarbonate, and incubator carbon dioxide percentage) and subculture-related parameters for thawing and the following subculture steps.

The freezing medium we used contains DMSO as cryoprotectant. For cell culturing after thaw, the DMSO is either partially removed or diluted to noninhibitory concentrations to allow cell growth. In a standard procedure, DMSO is removed by centrifugation. With fragile cells, however, the centrifugation step caused low cell viabilities and low recovery of viable cells. So after thawing the frozen vials, we handled the delicate cells without centrifugation. Our improved procedure uses a gentle conditioning step, in which cells are diluted with fresh medium (1:100) to reduce the DMSO to noninhibitory concentrations. Cells were then settled in stationary conditions. After a few hours we removed the excessive medium–DMSO mixture to allow seeding at defined cell densities (cell settling method, Figure 3). When the cell-settling process was complete, the majority of viable cells had settled. This gentle cell-settling method resulted in an average of 10% increased cell viabilities and 16% increased viable cell recovery over the standard centrifugation method (Figure 4). The delicate handling of these cells during vial thaw, therefore, led to overall higher cell recoveries and viabilities by comparison. 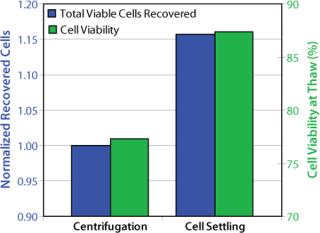 In the early phase of inoculum expansion, cells were maintained in static T-flask cultures, where they tended to form aggregates that were not separable solely by pipetting. Accurate cell counting was difficult because of those cell aggregates, and we saw large operator variances during counting. For consistent inoculum expansion, accurate cell counts are essential to seed cultures to a specified cell density. The inconsistency in cell count determination led to unpredictable cell growth over multiple subcultures.

To limit counting variations due to cell aggregates, we pretreated cell counting samples with Accumax agent from Innovative Cell Technologies, Inc. (www.innovativecelltech.com) to separate cells for counting. It separates cell aggregates to generate single cells without altering cell viability. According to the company’s website, Accumax agent contains enzymes that combine protease, collagenolytic, and DNAse activities to dissociate cell aggregates. We selected this reagent because it is free of animal-sourced components, which is relevant to manufacturing facilities, and we found its performance to be equivalent to porcine trypsin. Incorporation of the Accumax cell treatment contributed largely to reproducible and accurate cell counts, leading to reproducible growth rates and growth curves.

Culture medium pH plays a crucial role in cell growth, which is essential for inoculum expansion. The culture medium contains buffering substances to maintain a growth-promoting culture pH. In our case, a sodium bicarbonate (NaHCO3 as part of the medium) and carbon dioxide (CO2 in the incubator) buffering system provides the pH balance. Because cell growth lagged initially, we screened for the influence of CO2 concentrations in the incubator (5%, 7.5%, and 10%) on culture medium pH to select the optimum pH condition for cell growth. We tested medium pH both in T-flask (TF) and spinner-flask (SF) cultures. Cold culture medium (2–8 °C) containing 3 g/L NaHCO3 was incubated for 72 hours in a 36.5 °C humidified incubator containing variable CO2 concentrations.

Sample pH was measured using a BioProfile 100 instrument from NOVA Biomedical (www.novabiomedical.com) within two minutes of sampling. Triplicate samples were measured for each test point. After 24 hours incubation, pH had not changed over time, suggesting that CO2 equilibrium was reached in the culture medium. Figure 5 shows that for medium with 3 g/L NaHCO3, incubation between 7.5% and 10% CO2 concentration gave medium pH values between 7.3 and 7.5. A pH range of 7.0–7.4 is described as generally best supporting the growth of animal cell cultures (2), which we later confirmed for this cell line in particular (data not shown). 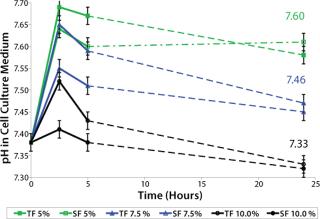 We found this medium pH screening also to be practical as a standard procedure during technology transfer. Incubator variances were normalized from facility to facility by screening the culture medium pH in incubators at all sites — and adjustments were applied where necessary.

Because NaHCO3 is also part of the pH buffering system, we evaluated its influence on medium pH. Media with 2.0, 2.5, and 3.0 g/L NaHCO3 concentration were incubated for 24 hours in humidified incubators at 36.5 °C with 5% and 7.5% CO2 concentrations. Those media were sampled and analyzed for pH as described above. The pH increased ∼0.1 pH units per 0.5g/L bicarbonate addition after incubation (Figure 6). Medium with 2.5 g/L NaHCO3 and 7.5% CO2 concentration in the incubator resulted in medium pH between 7.3 and 7.4. That range provided optimum conditions for the cells from vial thaw throughout inoculum expansion. We found the screening of NaHCO3 and CO2 concentration to be essential to selecting and supporting optimum pH for these recombinant cells.

A medium exchange procedure is commonly used during medium adaptation processes (3). This allows removal of spent culture medium and resuspension of cells into fresh medium (Figure 7). We adopted this procedure for early phases of inoculum expansion, in which lagging cell cultures are resuspended in completely fresh medium at defined cell densities.

For the medium exchange procedure, we pelleted cells and resuspended them in fresh culture medium at increased seeding cell densities over standard splits. Afterward, cells recovered and reached normal growth patterns at a faster rate. As a standard method, we also successfully incorporated this procedure during inoculum expansion when cells showed halted growth. Here, one-time medium exchange combined with higher seeding cell densities to restore cell growth and viability. We found this medium exchange procedure to be practical and crucial for establishing consistent cell growth and expansion robustness in the early stages of our inoculum process.

Well Worth the Effort

Our investigation of physicochemical and culture-related parameters for vial thaw and subsequent inoculum steps provided tools for a robust expansion procedure to use with fragile cell lines. Figure 8 summarizes all changes we implemented in the inoculum process. During medium screening, the optimized CO2 concentration in the incubator and NaHCO3 concentration in the medium led to optimum medium pH for the cells from vial thaw throughout inoculum expansion. 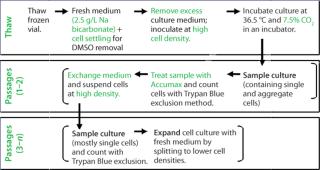 Figure 2 shows a consistent growth pattern and a steady increase of cell viability in the cell culture using the optimized process (green line) over the initial growth profile (blue line) using the standard method. With all these cumulative modifications, we established a repeatable preculture for cells from a fragile cell bank. This robust thawing and expansion procedure provides an excellent beginning to upstream manufacturing processes.

1.) CBER 1997. Points to Consider in Manufacture and Testing of Monoclonal Antibody Products for Human Use, US Food and Drug Administration, Rockville.
2.) Eagle, H. 1973. The Effect of Environmental pH on the Growth of Normal and Malignant Cells. J. Cell Physiol. 82:1-8.
3.) Verhoeye, F.. 2001.Adaptation and Growth Kinetics of the Universal Host CHO Cell Line in Serum-Free MediumAnimal Cell Technology: From Target to Market, Kluwer Academic Publishers, Dordrecht:438-440.