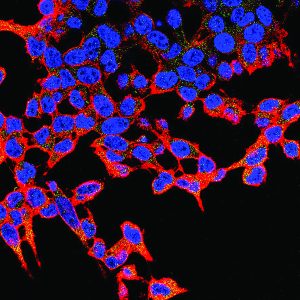 HEK 293T cells (ATCC CRL-3216) can express SARS-CoV-2 spike proteins; biomanufacturers of viruses and other vaccine components often think outside the box when it comes to considering expression systems. (https://www.atcc.org)

Plato wrote in ancient Greece that â€śour need will be the real creator,â€ť which transformed over time into the English proverb, â€śNecessity is the mother of invention.â€ť Advancements in medicine and biomanufacturing technology in 2020 have epitomized that idea. Even as technologies such as mRNA vaccines have rocketed into the publicâ€™s awareness, biomanufacturing experts have worked behind the scenes with renewed vigor spurred on by hard lessons from the pandemic.

Cell-line development and engineering are no exception. Already undergoing a revolution in speed and bioengineering capabilities, the discipline of biological expression has broadened its attention to assess options that previously were considered â€śfor research purposes onlyâ€ť as real candidates for bioprocessing. New approaches to perennial problems and regulatory concerns are offering a way forward that could make it easier to respond to future pandemics and to treat myriad other conditions, from rare genetic diseases to widespread cancers, autoimmune conditions, and metabolic disorders.

Cell-Line Development at BPI West
In late March 2021, the BioProcess International US West conference introduced its audience to Informaâ€™s new ConnectMe virtual event platform. Hundreds of participants tuned in to six tracks over three days. With expression systems in mind, I followed the upstream/production tracks and focused mainly on cell-line development and engineering. Discussions fell into three main subtopics: cell-line stability, expression of new modalities and using new hosts, and technologies for speeding development along.

Cell-Line Stability: Chinese hamster ovary (CHO) cells are the default biopharmaceutical expression system for good reasons. But one of their defining characteristics is considered to be both a benefit and a drawback. Genetic instability makes CHO cell lines easy to adapt to new media and culture conditions; it also creates challenges in long-term cell banking and characterization, especially with recent regulatory scrutiny on clonality. Several speakers focused on these concerns.

Nathan Lewis (associate professor in the department of pediatrics at the University of California at San Diego) explained that CHO cells require careful clone selection and stability testing to ensure that as production hosts they can maintain essential phenotypes and express product that meets defined critical quality attributes (CQAs). â€śOne mechanism of production instability stems from extensive DNA damage,â€ť Lewis pointed out. His laboratory has identified DNA damage-repair machinery that was impaired or suppressed in a number of CHO cell lines. â€śFollowing replacement of damaged alleles, we demonstrated increased stability of the CHO genome and increased production stability.â€ť By â€śrepairing the repairers,â€ť he said, developers can stabilize lead clones used for biotherapeutic manufacturing.

Turning protein-producing CHO clones into cell lines requires screening to identify those with consistent growth and productivity of product with qualities that can be relied upon over time. Theodore Peters (senior scientist in bioprocess development at Seagen) reported on his teamâ€™s investigation of production stability in CHO cells. Because cell lines derived from single-cell progenitors grow into populations with phenotypic and epigenetic heterogeneity, he explained, the team analyzed both primary clones and their respective subclones. Peters showed that differential gene-expression patterns in both stable and unstable clonal cohorts segregate with protein-titer stability and can be useful markers for clone screening.

Winston Timp (professor in biomedical engineering at John Hopkins University) highlighted a type of next-generation sequencing technique used in his laboratory for probing the genome/epigenome of CHO cells for assessing their productivity. â€śNanopore sequencingâ€ť helps identify the site of random gene insertions.

Ren Liu (principal scientist at Merck) showed how classical techniques could be used in tracking and screening against unwanted posttranslational modifications (PTMs). â€śTyrosine sulfation is a rare but critical PTM of antibodies,â€ť he said. â€śWe have found that tyrosine sulfation levels were significantly different among CHO cell lines.â€ť Liu believed that was attributable to differential expression of proteins in the sulfation pathway. After screening chemical inhibitors that might reduce tyrosine sulfation in CHO production cultures, the team identified a compound that could inhibit tyrosine sulfation significantly â€śwhile having minimal impact on cell growth, antibody production, and product quality.â€ť That provided Merck with a means of mitigating antibody sulfation through both host selection and inhibitor supplementation.

Cai Guo (cell-line development scientist at Amgen) identified antibody chain-expression and pairing liabilities that were to blame for low product quality of an four-chain bispecific molecule. Her team evaluated mitigation strategies to improve productivity of correctly paired bispecific antibodies, and in her talk she demonstrated the importance of balanced chain expression for such asymmetric molecules. This work has implications for both chain selection and vector engineering to enhance manufacturability of asymmetric multichain therapeutics.

Expression of New Modalities and in New Hosts: Both YenRu Pan (senior research scientist in process development at Gilead Sciences) and Jay Sinha (associate director of cell culture process sciences at Incyte Corporation) addressed bispecifics in their talks, too. Pan continued the discussion of asymmetry with an overview of Gileadâ€™s platform. And Sinha described Incyteâ€™s platform based on the CHO-K1 cell line, which has the glutamine synthetase (GS) gene knocked out to aid in selection screening. After studying how several systems produced a model bispecific antibody, the Incyte team found a promising host-vector system for further development.

Susan Sharfstein (nanobioscience professor at the State University of New Yorkâ€™s Polytechnic Institute) reported on her laboratoryâ€™s comparison of CHO and mastocytoma cells for production of a bioengineered heparin. For decades itâ€™s been the worldâ€™s most widely used anticoagulant drug, but heparin still is made from animal tissue (porcine in the United States, although it can come from other sources). Although that keeps it relatively inexpensive, it brings associated risks of both adulteration and contamination, so there is some interest in developing a cost-effective recombinant production method.

Jennifer Lin (gene therapy scientist II at Biogen) talked about production of recombinant adenoassociated virus (rAAV) vectors. â€śDeveloping a robust, scalable platform to generate quantities of rAAV required to support the clinical and commercial supply remains a challenge in the industry,â€ť she said. â€śThis challenge is relevant particularly when treating neuromuscular or systemic disorders requiring over 1015 viral genomes per dose.â€ť

To meet that need, Biogen is developing a platform based on a stable cell line engineered to contain both the transgene of interest and sequences needed to produce rAAV. Iterative process improvements driven by automation and high-throughput screening (HTS) have created a baseline platform to support program needs for highly productive clones. Lin described continuous improvements made to it for ongoing clinical support, as well as future plans for HTS methodologies to develop it further.

J. Christopher Love (professor of chemical engineering at Massachusetts Institute of Technology) highlighted how recent technological developments are making it possible to revisit alternative expression hosts in this era of â€śgenomic software tools.â€ť He touted an academiaâ€“industry collaboration advancing research and open-source, precompetitive development of microbial hosts. (For more discussion of that, see the next article in this featured report.) Love presented a first-principlesâ€“based approach to improved productivity and glycoengineering capabilities in Pichia pastoris for monoclonal antibodies.

Cell-Line Development Workflows: Speed has been the main buzzword in cell-line development discussions for a few years now, and enabling technologies have cut workflows to a fraction of what they used to be. The trend continues to spread through the biopharmaceutical industry as early adopters of automated systems from Berkeley Lights and other suppliers continue to optimize their processes â€” and as the more risk-averse companies follow their lead.

Yongping Crawford (biologics director at NGM Biopharmaceuticals) reported on her companyâ€™s development of a fast-track expression platform for cell-line development to produce multigram-scale research supplies. Based on the popular CHO-K1 host, NGMâ€™s cell line includes an intact, wild-type GS gene and a transposon system for integrating genes of interest into a â€śhot-spotâ€ť in the genome. The cell line can use any commercially available animal-componentâ€“free and chemically defined media in a nonintensified fed-batch process.

Using that system, NGM can generate bulk pools seven weeks after vector construction and produce antibodies at 4â€“5 g/L of culture. The platform supports a robust, single-cell cloning process without special media supplementation. â€śWe demonstrated that clones with a 2â€“3Ă— increase in titer can be generated from the bulk pool with minimum screening effort of fewer than 24 clones,â€ť Crawford said. â€śBy comparing the results with historical data, we revealed that our platform outperformed many commercially available systems that use a GS-knockout CHO-K1 host â€” but with no compromise of cell-line stability.â€ť

Seahee Kim (head of cell-line development at Samsung Biologics) stressed the importance of cell-line choice in accelerating timelines. â€śThe start of a biologicâ€™s developmental journey is cell line development. During this exciting milestone, a suitable cell line must be selected for optimizing the remaining processes for the highest output. Reducing time to market can determine a key factor for a successful business, so selecting the right pathway to begin is critical to prevent future risk.â€ť As an integrated contract development and manufacturing organization, her company helps its clients consider different cell lines for their specific projects.

Finally, Somen Nandi (adjunct professor in chemical engineering for the University of California at Davis) overviewed all the critical considerations for recombinant protein process development. They include drug-substance type and drug-product delivery methods, market needs, the landscape of competitive products, speed of development, platform technologies, process definitions, unit operations, product efficacy, target specifications, and cost of goods. Just as a chosen expression system determines much about how its engineering and development will progress, all those other factors interrelate and affect process economics in different ways. Cell-line development is a discrete workflow but cannot be thought of as a siloed activity.

Bioengineering the Future
The importance of modern gene-editing and next-generation sequencing to commercial expression of proteins and nucleic acids cannot be overstated. The conversations that follow address how scientists are engineering cell lines for improved expression of high-titer biologics that fulfill well-defined CQAs for product safety and efficacy. Meanwhile, other researchers are working to create cell-free production systems that might one day disrupt the entire concept of upstream production.