Suspension-adapted Chinese hamster ovary cell (CHO-S) cultures are widely used in biotechnological production of recombinant proteins. In fact, such special cell lines have become the standard for this type of biopharmaceutical production (1). The reasons for that include their fast reproduction, high protein expression rate compared with other eukaryotic cells and, above all, the glycosylation patterns generated by the cells (2, 3).

WHO SHOULD READ: Process and cell culture engineers, analytical personnel

Efficient production of correctly processed proteins requires optimized cultivation parameters. The SensorDish Reader (SDR) instrument from Precision Sensing GmbH of Regensburg, Germany (www.presens.de) offers a noninvasive online detection method that for the first time enables quantitative characterization of both pH and oxygen in 24-well multidishes. From CHO-S cell cultures sampled in various start concentrations, a correlation can be demonstrated between cell number, oxygen consumption, and pH value during cell cultivation. Online detection of oxygen and pH at the small scale can be used as a basis for later cultivation in large-scale bioreactors to detect optimal conditions such as media composition or temperature. Sterile online monitoring of culture parameters is not only important for upscaling production in process development, but it also could be valuable for other applications such as tissue engineering, stem cell research, and toxicological tests.

CHO cells used in the experiments reported here came from Celonic GmbH of Jülich, Germany (www.celonic.de), which also performed the study. The cell line was adapted to suspension culture. Such adapted cells display a high metabolic rate and grow serum-free to cell concentrations of at least 2 × 106 cells/mL. Cultivation in a defined medium was performed over 12 days under standard conditions in an incubator (5% CO2, 95% humidity, and 37°C). Four different cell concentrations (50 cells/mL, 2 × 103 cells/mL, 2.5 × 104 cells/mL; and 3.2 × 105 cells/mL) were tested in parallel to investigate the sensitivity of the SDR instrument — in particular its limit of detection regarding cell numbers per sample. Medium changes were performed at intervals of 24 hours.

Cells were cultivated directly in 24-well HydroDish multidishes for pH monitoring and OxoDish multidishes for oxygen detection, both from PreSens Precision Sensing GmbH. In these dishes, the optical sensors located at the bottom of each well are read out noninvasively by the SDR instrument (Photo 1), which enables online monitoring of both process parameters. Two of the 24-channel readers were connected in parallel for simultaneous read-out of both oxygen and pH, respectively. Up to 10 readers can be connected in parallel to read out 240 samples at a time. 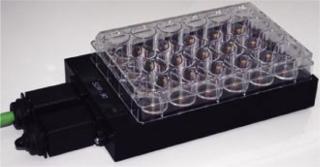 Protocol in Brief: Dishes are placed onto readers, then kept in an incubator for their full cultivation time. The dishes are moved from the readers only for a daily media change, which ensures optimal conditions for cultured cells in the incubator for the whole time of their cultivation. Measurements are taken automatically at intervals of 10 minutes.

In this study, one well served as a reference sample, with culture media but no cells. Each cell concentration level was represented in one well of the oxygen and pH dishes, respectively, with a sample volume of 1.2 mL/well.

Figure 1 shows pH kinetics monitored by the SDR instrument during CHO-S cell cultivation. Depending on the initial cell concentration, pH values decreased at different speeds. The sample with the highest starting concentration (3.2 × 105 cells/mL) showed a significant pH decrease on the first day already, and that continued on the following three days with an upward tendency. The pH value decreased continuously from its initial value of 7.2 to a final pH of 6.3. Because of the daily media changes, a lower pH value was not obtained. 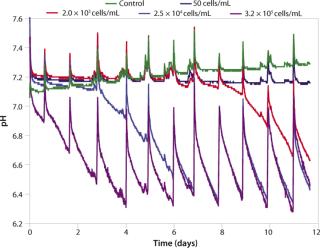 Kinetics for samples with lower initial cell concentrations show similar behavior: pH values decreased after a delay of three days (for 2.5 × 104 cells/mL) and six days (for 2 × 103 cells/mL), respectively. And for the lowest starting concentration of 50 cells/mL, no significant pH change of the medium was observed. The start of the pH decrease therefore correlates directly with the beginning concentration of CHO-S cells, which is also shown in a microscopy photo of an OxoDish well (Figure 2).

These kinetics allow for estimation of system sensitivity. In this test set-up, the limit of detection for CHO-S cells was estimated at 8 × 104 cells/mL. But the limit depends on buffer capacity of the applied medium as well as the cell respiration and doubling rates. It has to be determined individually for such applications as setting up toxicological studies.

Oxygen consumption depends directly on both cell concentration and the metabolic state of a culture (Figure 3). For the highest cell density of 3.2 × 105 cells/mL, the oxygen content dropped from a starting value of 90% air saturation to
only about 9% air saturation within several hours. This drastic effect was observed after each change of medium. After about five days, the oxygen content dropped to 6% air saturation, whereas from day 10 onward a slight oxygen increase in the medium was detected. The deviation in oxygen values after medium change after one day is assumed to be due to accidental removal of cells during the medium change procedure, which is quite common in handling suspension cultures. 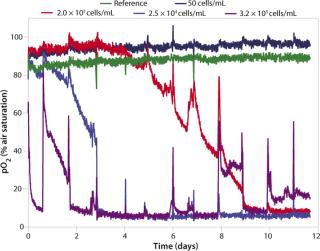 Samples with lower cell concentrations show similar kinetics, with a delay of about 12 hours (for 2.5 × 104 cells/mL) and four days (for 2 × 103 cells/mL), respectively. The oxygen uptake rate (OUR) increases at each medium change. Because of the high metabolic rate of CHO-S cells, low oxygen levels are reached again rather quickly following a change of medium.

Microscopic data regarding cell density and structure (Figure 2) give further information on the specific kinetics: The two higher concentrations of 3.2 × 105 cells/mL and 2.5 × 104 cells/mL form cell aggregates over longer cultivation times (Figure 2, wells C1 and D1 at Day 12). And that influences the oxygen kinetics in two ways. First, cell complexes can be removed during media change. Second, it is very likely that aggregate structures increasingly inhibit cellular metabolism, which is probably the reason for the oxygen increase to a level of ∼15% air saturation from Day 10 onward. 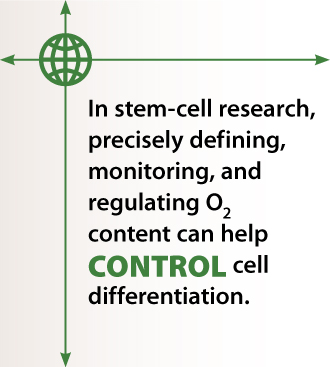 As in pH monitoring, metabolism of the lowest cell density culture (50 cells/mL) is undetectable with the OxoDish reader. For this set-up (24-well multiwell dishes using 1.2 mL samples in each well), the oxygen ingress into the sample from ambient air alone completely compensates for the oxygen consumption by the cells. Kinetics allow an estimation of a limit of detection of 8 × 103 cells/mL, assuming a doubling time of 35 hours for low cell densities. Oxygen levels at the start of cultivation lay within the OxoDish resolution of ±5% air saturation. As with the pH sample, the control sample for oxygen measurement showed stable values for the duration of the cultivation.

Applications in Tissue Engineering and Cytotoxicity

This successful sensitivity test using relatively robust CHO-S cells with a high metabolism rate provides a base for further studies using more sensitive cell types. Those might include human chondrocytes, ceratinocytes, and hepatocytes, which are under investigation for use in regenerative medicine (4,5,6).

Another potential field of application would be stem-cell research. In such studies, exactly defined oxygen content during in vitro development could be monitored precisely and, if necessary, regulated. Thus, controlled cell differentiation at hypoxic conditions could be performed at a higher security.

Furthermore, the precise detection of oxygen kinetics should enable new applications in pharmacology and toxicology (e.g., using HeLa cells or primary cell lines). The cytotoxicological effect of new active agents can be investigated quickly and quantitatively with the SDR instrument. In fact, toxicological tests with this system have already been performed successfully using bacteria (7). Noninvasive characterization and control of optimal culture conditions is a significant step forward in culture techniques, particularly for process development.