As part of The Automation Partnership’s “20 Years of Automated Cell Culture” series, science writer Sue Pearson interviewed Dr. John Birch, the chief scientific officer of biopharmaceuticals for Lonza Custom Manufacturing APIS based in Slough, UK. Birch has been with that company since 1996, Before that, he held senior technical positions at Tate and Lyle, GD Searle, and Celltech. Birch has a PhD in microbiology from London University, where he also spent a period lecturing before moving into the industry. Internationally recognized as an expert in the production of therapeutic proteins (particularly from mammalian cells) Birch has published extensively in the field. He has been involved in bioprocess research for >30 years, and in this interview he explains both how bioprocessing has developed over the past 20 years and what it might look like in years to come.

Pearson: Can you give a brief idea of what bioprocessing means to you and what it looked like in 1989?

Birch: A wide range of products are made using bioprocesses, but my interest has been in the use of these processes to manufacture therapeutic proteins — particularly through mammalian cell culture, a field that has become increasingly important in recent years. Twenty years ago, bioprocessing for production of therapeutic proteins was still in its infancy. The development of recombinant DNA and monoclonal antibody (MAb) technologies was just beginning to have an impact, making it possible to produce a much broader range of proteins (and in much larger quantities) than had previously been possible. The first recombinant protein (insulin) was approved in 1982, and by 1989 a small number of proteins (about six) were being produced, mostly using the bacterium Escherichia coli. 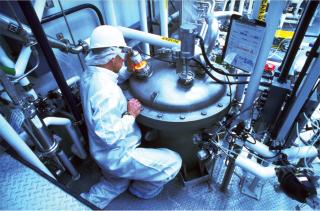 It rapidly became apparent that not all proteins could be made by microbial culture, particularly not those requiring mammalian posttranslational modifications such as glycosylation. This stimulated the development of mammalian cell expression technologies, particularly using Chinese hamster ovary (CHO) cells. The first recombinant protein made in mammalian cells (tissue plasminogen activator) was approved in 1987. Therapeutic MAbs were of great interest, but they still presented significant challenges; an antibody made in hybridoma cell culture was the only approved product.

Although cell culture for producing recombinant proteins was in its infancy, technologies for growing cells in attached and suspension cultures were already quite well advanced, largely driven by the vaccine industry. Deep-tank, stainless steel suspension reactors were already in use at thousands of liter scales. In practice, both attached cultures (in disposable roller bottles) and suspension cultures were used, depending on the product and scale of operation, and a number of other reactor types were being evaluated. Protein titers were much lower then: For a recombinant antibody, we achieved ~50 mg/L, which is about 200-fold less than the best results seen now. Development of culture media and feeding strategies to achieve high cell population densities and productivities was at a formative stage, and it was still usual to include serum proteins in the medium.

Pearson: How has the bioprocessing of therapeutic proteins developed over the past 20 years?

Birch: Modern molecular biology and protein engineering techniques have greatly extended the range of proteins that have been developed as therapies. This is particularly true for MAbs. The first-generation products were of mouse origin and thus were limited in use because they generated an antimouse immune response in vivo. Methods were developed to reduce and ultimately eliminate the mouse portion of these proteins, so it is now possible to make entirely human antibodies. Together with the identification of therapeutically relevant specificities, such advances have resulted in a large number of products coming to market. There are now around 20 MAbs that have been approved, and there are very many more in development.

The increasing use of MAbs also began to change the scale of bioprocess manufacturing using cell culture. Unlike many early biopharmaceutical products, some antibodies are used at high doses and are thus required in large quantities (hundreds of kilograms or tons, in some cases). This has led to a large increase in installed capacity, both in-house in pharmaceutical and biotechnology companies, and at contract manufacturing companies such as Lonza. The scale of bioprocessing unit operations has also increased. We now operate reactors up to 20,000 L in Portsmouth, NH, and similar size capacity is being added in Singapore.

In parallel, the scale of protein purification has increased with, for example, the use of chromatography columns up to 2 m in diameter. Most fermentation processes — particularly those requiring large-scale operation — use batch or (more commonly) fed-batch suspension culture. Some processes use continuous perfusion culture, especially for particularly labile proteins. Several types of mammalian cell have been used for therapeutic protein production, but CHO cells are most widely used. A wide range of proteins have been successfully produced in CHO cells, and a wealth of related process and product experience has been accumulated over the years.

During the 1990s, we had world-wide concern about bovine spongiform encephalopathy (BSE), which provided an impetus to remove, where possible, all animal-derived products from bioprocesses. This change had additional benefits, leading to better-defined processes that were easier to optimize. In our own facility, we now routinely develop processes using media and feeds that are chemically defined, protein free, and which contain no animal-derived components.

Another big change in the past few years has been implementation of single-use systems, particularly in multiproduct facilities where they offer significant benefits in terms of operational flexibility and savings in water, chemicals, and energy for cleaning and sterilization.

Pearson: What have been the main technical challenges in the bioprocessing of therapeutic proteins over the past 20 years?

Birch: The first challenge in making these highly complex molecules was simply to produce enough material at an acceptable cost. This challenge increased with the emergence of MAb products that were required in larger amounts. The second big challenge has been to reduce the time it takes to develop a bioprocess before it can be transferred to manufacturing. This is a particular issue for mammalian cell culture processes because creation of the production cell line itself can take a very long time. The third major issue is to ensure product of the desired quality, and the complexity of these products makes this a particular challenge

Pearson: How have those technical challenges been addressed?

Birch: The issue of producing enough material at an appropriate cost was addressed partially by increasing capacity and scale of operation, but also by increasing process efficiency. Fermentation process improvements have been particularly dramatic, and two main factors have contribut
ed to this. Advances in gene expression technology and in techniques (including automated systems) to screen cells for desired properties have made a significant contribution. The second (and probably more important) factor is progress made in the design of feeding strategies for fed-batch culture. For antibodies, g/L titers are now routinely achieved, and examples >10-g/L productivity have been reported. With such dramatic increases in titer, the greater proportion of cost is now associated with product recovery and purification, so increased attention is being paid both to improving the operational efficiency of existing technologies and looking at alternatives to existing chromatography methods.

Reduction of development timescales has been approached from several directions. The single biggest issue has been the time it takes to generate a clonally derived cell line suitable for product manufacture. Broadly this has been addressed by improvements to gene expression systems, methods used to ensure clonal derivation, and screening techniques. In the example of the GS gene expression system owned and licensed by Lonza, cell selection is designed to be sufficiently stringent to prevent a need for additional, time-consuming rounds of amplification. In addition, a suspension CHO variant (CHOK1SV) eliminates the time taken to adapt cells to chemically defined, animal-component–free suspension culture. Use of an automated cloning system and modified screening procedures has further reduced the time taken to generate cell lines from 60 weeks to 30 weeks. Other advances have helped to save development time — in particular the use of platform processes and increased use of scaled-down laboratory tools (increasingly automated) that can predict behavior at manufacturing scale.

The third area of challenge (ensuring products with desired quality attributes) has benefited enormously from rapid progress in analytical technology over the past two decades and an increasing knowledge of what characteristics are desirable and undesirable. We are starting to see that knowledge applied to the design of cell lines, processes, and products. For example, engineering glycosylation pathways in cell lines gives products with glycan structures that have desired biological properties.

In addition to quality attributes that influence therapeutic use, there is growing recognition of the importance of identifying early those properties of a product that will present challenges in manufacturing. One example is protein aggregation. Aggregates are undesirable in a product and can add complexity to a purification process. We have developed Aggresolve software for predicting the aggregation propensity of proteins. It can be useful in screening product candidates or for providing a rational basis for redesigning proteins.

Pearson: What will bioprocessing of therapeutic proteins look like in 20 years?

Birch: A very large number of proteins in preclinical and clinical development are based on mammalian cell culture, so we can expect to see this technology play an important role for the foreseeable future. Titers are expected to continue rising, probably to levels routinely >10 g/L for antibodies, as a result of further process optimization and cell line improvements based on a better fundamental understanding of cell biology. Most processes are likely to continue using CHO cells (or derivatives) because of their track record and strong position in the industry. Fed-batch processes operated at a range of scales up to 20,000 L are also likely to remain the industry standard. Disposable systems will become even more significant for both fermentation and downstream processing, especially in small to medium-scale multipurpose plants.

Significant shifts in bioprocessing are likely, driven in part by product innovation. For example, there is interest in smaller molecules based on antibody fragments or other protein scaffolds produced in bacterial culture. So microbial culture is likely to become generally more prevalent because it offers some advantages over mammalian cell culture. The fermentation process is less complex, for example, and process development times are shorter. As expression technologies improve, it may be an option to use such systems for more complex proteins that have traditionally been made only by mammalian cell culture.

We will undoubtedly see huge improvements in the tools available for process development based on advanced analytical capabilities; greater biological insights; and improved, automated, scaled-down process models. This will result in faster process development, improved productivity, and (perhaps most important) a greater capability to control and dictate product quality.

Whatever happens in the next 20 years, we can be sure there will continue to be plenty of challenges as scientists and engineers look for more efficient ways to manufacture the next generations of biological therapeutics. These will include not just proteins, but also much more complex products for use in regenerative medicine and gene therapy.