Pichia pastoris is a species of methylotrophic yeast that is widely used for protein expression both in academia and the biotechnology industry. A number of properties make it suited for this task (1). Pichia has a high growth rate, and it can grow on simple, inexpensive media. It can also be grown in either shaker flasks or bioreactors, which makes it suitable for both small-and large-scale protein production.

WHO SHOULD READ: Manufacturing and process development personnel

Growing P. pastoris to high densities is of great benefit when producing certain recombinant proteins. However, with high yield comes a high demand for oxygen. That in turn requires a culture vessel to deliver a large amount of oxygen to yeast cultures (that is, it must offer a high mass-transfer rate) if maximum densities are to be achieved.

Single-use bioreactors are fast and easy to deploy with short turn-around times between batches. But trying to create a rapidly stirred single-use system (for high mass transfer) in which the stirrers and their bearings are made from USP Class VI low-density polyethylene is difficult because LDPE is a soft material with a low melting temperature. Moving parts made from LDPE wear out quickly if they are used at high speeds — such as when bearings on the drive shaft of a stirred bioreactor are rotated at 500 rpm. And they cannot be steam-sterilized. The industry-standard polymer for bearings and seals is polytetrafluoroethylene (PTFE), which is sterilizable. But a better choice would be to manage aeration without a stirrer at all.

As seen in Figure 1, the CellexusBag bioreactor system is made entirely of LDPE, but it oxygenates and mixes cultures without stirrers (and thus without moving parts). A high oxygen mass transfer is achieved through high aeration rates from its proprietary integrated sparge tube, the unusual shape of the vessel (providing a large surface area), and an ability to pressurize the headspace. Here, we describe the use of this system to grow P. pastoris X-33 and compare its performance with that of a rapidly agitated, baffled shaker flask growing the same Pichia cell line with the same media at the same time. The shaker-flask protocol forms part of an inoculum seed train system in production of a recombinant protein for therapeutic use. 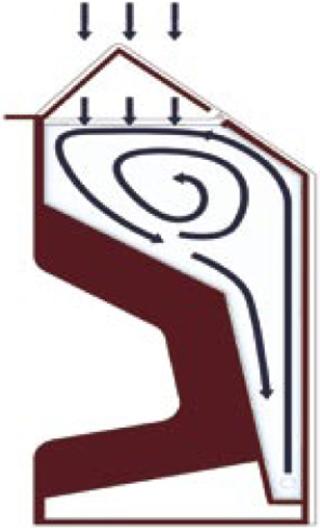 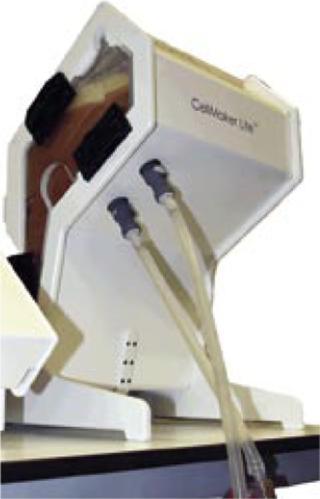 The objective of our experiment was to perform a side-by-side comparison of the growth of recombinant P. pastoris X-33 in a shaker flask with the same culture in the CellMaker Lite2 system. Every effort was made to keep all materials, inoculating cultures, and reagents identical. The cultures were not induced during the experiments. Two different strategies were followed:

Optical Density (OD600): We analyzed each culture’s optical density using a Helios gamma UV–vis spectrophotometer from Thermo Scientific (www.thermo.com) measuring light scatter by suspended cells at the 600-nm wavelength. All dilutions of the culture samples were made using an automated diluter from Hamilton Company (www.hamilton.ch) to maintain the OD600 between 0.000 and 0.800.

On-Line Analysis of O2 and CO2 in the Exhaust Gas: We used a T connector to attach the exhaust gas line of the bioreactor at the vent valve of a gas-out Kleenpak filter from Pall (www.pall.com). Oxygen and carbon dioxide contents of the exhaust gas were monitored over the course of each batch using a custom-built mass spectrometer.

Cell Culture Medium: Our culture medium was composed of Springer 0251 yeast extract from Bio Springer (www.biospringer.com) at 8 g/L, papaic extract of soya from Solabia (of Pantin, France) at 6.7 g/L, and DF204K antifoam from Ouvrie (www.ouvrie.com) at a 1:1 ratio in ethanol of 0.75 mL/L. The medium was autoclaved immediately before use. Afterward, we added 7044 glycerol from JT Baker (www.jtbaker.com) to a final concentration of 20 g/L, then 400 mL of media were added to a 1-L baffled flask, and 4 L of media were added to a CellexusBag fitted into the CellMaker Lite2 system.

A Model Two-Stage Process with Both Stages Performed in Separate Bags: The purpose of this trial was to determine whether two bags could be used concurrently to culture P. pastoris directly from frozen cell stocks. The initial optical density in Stage 2 was about 0.03 for both the shaker flask and the CellMaker system.

Inoculation and Growth Conditions for Stage 1: All media were prewarmed to 30 °C. The Stage 1 flask was inoculated with 0.1 mL yeast cells into 400 mL of medium, and the bag with 1 mL into 4 L. Stock cultures used had been prepared previously and stored frozen. 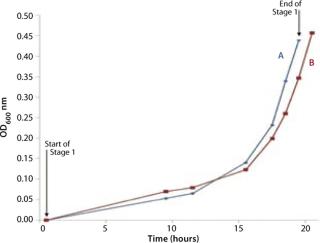 The bag culture was also grown at 30 °C and operated at medium pressure (30 mBar), with an initial air flow rate of 4 L/min. We increased the flow rate to 5 L/min after 12 hours (equivalent to 33 hours total, Point B in Figure 5), then to 8 L/min 18 hours into Stage 2 (equivalent to 38 hours total, Point C in Figure 5). And we halted the experiment at 23 h (44 hours total). Growth curves and pH profiles of Stages 1 and 2 are presented in Figures 3 and 4, respectively. 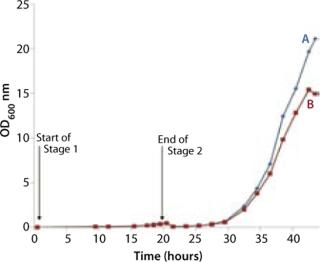 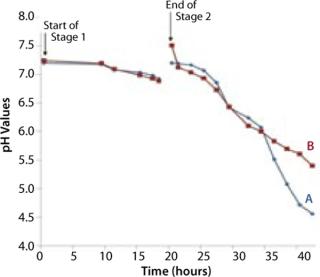 Model Two-Stage Process with the First Stage Performed in a Shaker Flask and the Second Performed in a Bag (Higher Inoculation Ratio and Aeration Rate): The purpose of this trial was to determine the maximal OD that could be achieved within a 24-hour period. The initial OD in Stage 2 was about 0.09 in both the shaker flask and the bag, some three times higher than for Part A.

Inoculation and Growth Conditions of Stage 1: All media were prewarmed to 30 °C. Each flask was inoculated with previously prepared cells that had been stored frozen, then incubated at 30 °C with 250 rpm agitation. These cultures were allowed to progress for 18 hours.

Inoculation and Growth Conditions of Stage 2: All media were prewarmed to 30 °C. A Stage 1 shaker flask culture with an OD of 2.03 was used to inoculate to a density of 0.09 both a Stage 2 shaker flask and bag. We inoculated 18 mL of Stage 1 culture into a total volume of 400 mL of medium in a shaker flask and 180 mL to the bag, increasing its volume to 4 L with prewarmed medium.

The shaker flasks were again incubated at 30 °C, but this time they were agitated at 270 rpm to achieve the highest possible cell density. The bag again operated at medium pressure (30 mBar) with an initial airflow of 4 L/min, which we increased to 10 L/min when the concentration of CO2 in its exhaust began to increase (indicating that cells were actively growing). The final aeration rate was therefore 2.5 L air/min/L of culture, which is similar to the rates used in stirred bioreactors (2). We halted this experiment after 22 hours.

Figures (23456) show the results of these testing procedures.

Two-Stage Culture in the CellexusBag (Part A): This first part of our trial demonstrated that a disposable bioreactor could be used to entirely replace a two-stage inoculum seed-train culture usually performed in shaker flasks. Stock cultures of Pichia directly from the freezer were used to inoculate Stage 1.

Figures 2, 3, and 6 show that the CellexusBag single-use bioreactor could directly replace the shaker flasks. Initial maximum growth (µmax) rates were consistent between all bags and flasks at 0.35–0.36 per hour, which showed that conditions for growth were the same in the early phases of the culture for Parts A and B. But higher densities were achieved in the bag, possibly from growth retardation in the shaker flasks due to lower oxygen concentrations.

The Stage 2 shaker-flask culture achieved a maximum OD of 15, whereas the bag culture continued to increase to 20+ with a concomitant decrease in pH. The O2 and CO2 concentration profiles in its exhaust gas suggested that during the very end of the 4-L stage, the rate of production slows and is not exponential. That indicates a limitation in growth rate, which is also visible during the latter part of the 5 L/min phase, but not early in the 4 L/min phase. Each time we increased the aeration rate (from 4 L/min to 5 L/min and then to 8 L/min), the rate of CO2 production in the exhaust gas increased (Figure 5). 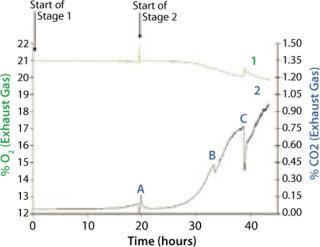 Optimizing Growth Conditions (Part B): In the second trial, we further optimized the conditions used to culture Pichia in the CellMaker Lite system. A threefold higher inoculum was used, and the aeration rate was increased to 10 L/min as soon as the culture began to grow.

The bag culture continued to grow and showed no sign of having reached its stationary phase (Figure 6). ODs higher than 29 are likely to be achieved if a culture is left to continue, which would be comparable to a stirred or sparged bioreactor agitated to 300–500 rpm (2,3,4). Based on the amount of carbon in the system with this simple batch protocol (a starting concentration of 20 g/L glycerol), we would anticipate that the carbon source would become the limiting factor in further biomass increase. Adopting a fed-batch protocol could further increase maximal ODs achieved in similar cultures. 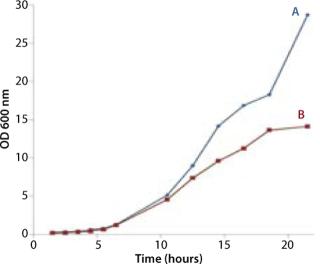 The µmax rates were consistent between all bags and flasks at 0.35–0.36 per hour. This shows that conditions for growth in the single-use bioreactors and flasks were the same in the early phases of culture in Parts A and B.

The culture of oxygen-hungry P. pastoris on carbon-rich media such as those used in this experiment demonstrated that the CellMaker Lite system and its single-use bag component could support cell densities of just under an OD of 30 in less than 24 hours. A 4-L culture in such a bag with an OD of 30+ would be suitable to seed a 500-L to 2,000-L vessel with no interim steps. So a disposable bioreactor of this type, with its short turn-around times and elimination of the cleaning step, would be a realistic alternative to a stirred-tank bioreactor for production of seed cultures of P. pastoris. It is likely that the yield per liter of culture using this technology could be optimized even further through the addition of oxygen-enriched air and use of a feeding strategy, neither of which were involved in these experiments.