We have previously described a patented nonsparging, nonbubbling oxygen transfer method (1). This method is based on interaction between the air-exposed smooth surface of a bioreactor vessel and culture medium repeatedly sweeping across it with a certain force, which seems to generate microscopic bubbles among the water molecules (2). We manufactured high–oxygen-transfer Current suspension bioreactors with working volumes of 5 L, 50 L, 150 L, and 300 L.

Here we describe the use of these suspension bioreactors as “artificial lungs” or dissolved oxygen generators to seed and irrigate cell columns that are completely filled with affordable, nonwoven polymer fibers (made in China by a member of the AmProtein alliance) to achieve high-density culture. These bioreactors thus mimic human heart and lung machines to perfuse a cell column that is completely filled with polymer fiber discs used as cell anchorage carriers. The Current bioreactors provided for high-density cell culture of various cell types, including whole blood cell culture (50% packed cell volume). We successfully performed whole blood cell cultures and safely returned the cultured blood to the animals in addition to developing a stable culture process (US patent pending). 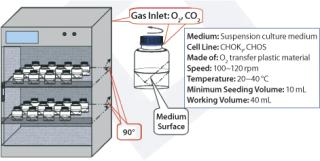 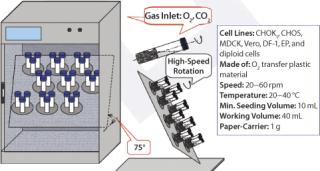 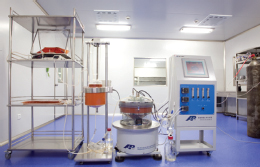 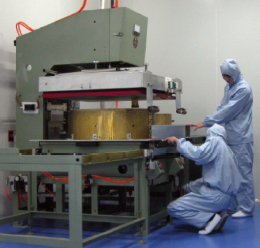 We used this manufactured equipment for all cell culture work described herein.

For DO, pH, and temperature measurement, we used AmProtein’s control tower with probes for those attributes (Photo 3). The Applikon bioreactor control tower we used as a control for our study is not shown. We compared oxygen transfer speeds for biodegradable “green” plastic bags and regular, nondegradable plastic bags (Table 1). The latter material was manufactured by AmProtein in the People’s Republic of China, and the former was a kind gift from Wei Chuang Lu of Guo Yun Biotechnology Co., Ltd. in Tianjin, China. Leachables and endotoxins were analyzed at Harbin Bio-engineering Co., Ltd. (www.harbinbio.com.cn) by incubating the materials for 3, 6, 12, 24, 48, and 96 hours in phosphate-buffered saline (PBS) and distilled water at 37 °C. 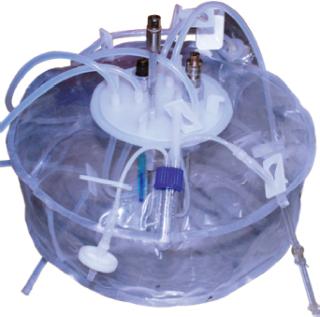 Two different shapes of 5-L cell column were tested (Figure 4). In brief, we collected carrier samples at the end of each culture and trypsinized the collected samples (same size) for counting the released cells.

For whole blood culture, we collected goat blood through the jugular vein of a domestic goat and then cultured it in a mixture of amino acids and glucose. We conducted counts of red blood cells, white blood cells, and platelets according to a standard clinical procedure (data not shown) before returning the cultured blood through the animal’s jugular vein without incident.

We used CHO-S cells from Invitrogen (www.invitrogen.com) and CHO-K1 cells from the American Type Culture Collection (www.atcc.org) to study our perfusion bioreactor system. Table 2 describes the extremely high density cell culture achieved, suggesting the capability of Current systems for industrial-scale CHO cell culture in recombinant protein and antibody production. The CHO-K1 cells were successfully cultured while attached to nonwoven, polymer fiber carriers — growing not only on their surfaces, but also throughout the carriers (Figure 5). Before we had pursued the PER.C6 technology, but the photomicrographs at left indicate that this is no longer necessary. 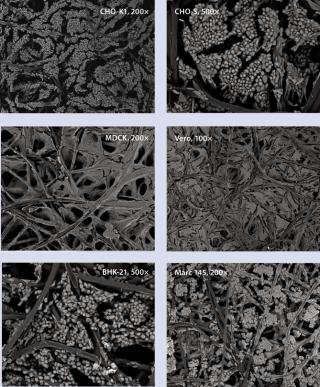 Our results suggested that this system requires less facility engineer support than other systems and is practical for industrial production. The cell biomass in one 150-L Current bioreactor may equal that of a 1,500-L suspension bioreactor (Figure 6). By increasing tubing and pump sizes, we could further scale up. This bioreactor is entirely single-use, with no need for cleaning- and sterilization-in-place (CIP, SIP) facility support. We found it to be ideal for process development and seed train operations to feed larger bioreactors.

Results from cultures carried out in Current perfusion bioreactors indicate that extremely high cell density cultures of vaccine-producing cells were achieved (Table 3). Cell biomass from one 5-L bioreactor (150 g of paper carriers) equals that of 150 roller bottles (Figure 7), and the cell biomass of one 150-L bioreactor equals that of 3,600 roller bottles (a medium-sized roller bottle plant). This success suggests that industrial application of the Current perfusion bioreactor could revolutionize the vaccine production field, particularly in developing countries. One advantage of the 5-L bioreactor is control of manufacturing process parameters (such as DO, pH, and temperature).

We have studied cell biomass distribution in cell columns of different shapes, and the results (Figure 4) suggest a stable and similar distribution pattern. When compared with a New Brunswick Scientific (www.nbsc.com) perfusion bioreactor, the Current perfusion bioreactor obtained similar or better results (Table 4), which suggest that a similar quality cell anchorage was achieved.

It is widely accepted that the 100% air-saturation method used to normalize a bioreactor’s DO probe is to sparge air for six hours in PBS or culture medium without cells. But it is surprising to find that saturated DO levels are always higher in a Current bioreactor than when the sparging method is used (Table 5), which suggests that air-saturated DO is actually higher when this effective O2 transfer method is applied.

Table 5: The standard dissolved oxygen (DO) probe normalization method to 100% air saturation is to apply six hours of air sparging to a bioreactor vessel with culture medium. Our results indicated that the classical definition of a 100% saturated medium DO is altered by the nonsparging oxygen transfer method used in Current bioreactor systems.

Life-saving medical device manufacturing can require outside-body blood oxygen transfer and safe culture. We used whole goat blood to conduct related experiments, collecting it through a vein and then culturing it with a mixture of amino acids and glucose. Cell counts were conducted according a standard procedure (Table 6), and at day 6, the cultured blood was returned. A similar experiment was performed with rabbits and AmProtein’s 40-mL miniature bioreactor, and similar results were obtained, suggesting safe culture and return of the cultured blood (data not shown). Taken together, these results indicate a possibility for using the Current suspension bioreactor as an effective artificial lung with additional in vitro whole blood culture and return functionality.

Table 6: Whole goat blood in vitro culture was conducted in a 5-L Current suspension bioreactor for six days and then returned to the goat.

Discovery of an efficient nonsparging oxygen transfer method (1) gives us a niche to manufacture effective single-use bioreactors with independent intellectual property (IP). In addition to the single-use suspension bioreactor as described previously (2), we are developing a perfusion bioreactor system intended for small-volume, high-density cell culture in industrial production. Such cultures mimic human organs and tissues, in which cells are packed together supporting each other, which plays an important role in metabolic efficiency and long-term survival of cells.

Nonwoven polymer fiber carriers for anchorage-dependent cell cultures were developed >20 years ago (3) and have been used by New Brunswick Scientific for GMP drug and vaccine manufacture in China. That company packs the polymer fiber carriers within a basket inside bioreactor vessels. Mixing is performed by an impeller, and oxygen transfer comes through air-sparging at the vessel bottom. Both become a problem at larger scales from poor penetration of oxygenated medium nutrients to the cell biomass inside (4). The system can be difficult to scale up for industrial applications such as animal vaccine manufacture.

Our “artificial lung” or DO-generator–based perfusion bioreactor system mimics the function of a heart and lungs for irrigating organs and tissues with fresh, oxygenated blood. Our system uses a Current suspension bioreactor to perfuse a cell column filled with nonwoven polymer fiber carriers. We scaled up easily by using a larger pump and wider tubing to speed up the irrigating speed and reached an outlet DO only 10% less than that of the inlet DO and an outlet pH only 0.1 lower than inlet pH by adjusting the flow rate to 500 mL/min in a 5-L perfusion bioreactor. Compared with the flow of blood in human veins, this is more than acceptable.

Adjusting the cell column height modulated the force of gravity. We used this to adjust the flow rate of medium coming out of the column and used a powerful peristaltic pump to fill the column with fresh medium to achieve equilibrium. The surface level of the culture medium in the cell column was stable and well maintained. To be safe, we constructed an infrared laser device that could detect deviations of the medium surface, should they occur, and connected this device to a small automatic pump to maintain the medium surface at a certain level (not shown).

Despite the frequent cell damage that occurs when anchorage-dependent cells are attached on microcarrier surfaces (due to impellor shear and friction forces on the culture vessel wall), the significant advantage of this perfusion system is its easily scalable seed train. We washed the cell carrier contained in the cell column and removed cells by trypsinization, routinely removing 80% of them into the medium. In our perfusion system, we have columns filled with 1 g, 10 g, 150 g, 1,200 g, 3,600 g, and 7,200 g of the polymer fiber carriers as a seed train for industrial grade scale-up. Compared with cell suspension perfusion culture using expensive hollow fiber columns, this system is much more affordable and scalable, which are significant advantages particularly for animal vaccine production.

Running a one- to two-month perfusion culture is standard practice in our laboratory. We found that high-density cell culture in a cell column promotes cell survival and growth and reduces lactate production (data not shown). It is possible that high-density cells produce more growth factors and cytokines to support each other and shift to a less lactate-producing metabolic pathway.

Most surprising, our whole-blood cell culture results (Table 6) indicate that the Current suspension bioreactor system provided sufficient oxygen to serve as an artificial lung (5) without damaging blood cells, allowing for their safe return to the animals. This provides a safe ex vivo blood culture system for possible cancer therapies (e.g., local radiation therapy or chemotherapy) with fewer side-effects for patients. So this finding has significance for further medical applications.

This article was electronically preprinted in May 2009 (www.bioprocessintl.com/bpiextra) and also appears online at www.amprotein.com/technology/current.perfusion.bioreactor