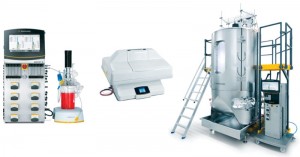 Through the past decade, single-use bioreactors for culturing mammalian and insect cells have been widely adopted in preclinical, clinical, and production-scale biopharmaceutical facilities (1, 2). With such bioreactors in operation, monitoring and control of process parameters is vital for ensuring critical quality attributes (CQAs) of biologicals or vaccines are met for production of a safe product. Traditionally, bag-based and bench-top vessels have been fitted with conventional pH and dissolved oxygen (DO) probes similar to those used in stainless steel or bench-top bioreactors. DO and pH are the most commonly monitored physicochemical parameters measured in real time. For many processes, pH measurement and control is critical because small deviations can influence culture growth and metabolism, particularly glucose consumption and lactate production (3). DO must be monitored and controlled to prevent changes in oxygen concentration, which can cause problems such as excessive lactate production, reduced antibody glycosylation, or cytotoxicity (4, 5).

Reusable sensors usually are calibrated separately, mounted in probe assemblies, autoclaved, and then fitted by means of an aseptic connector to a single-use bag. Such time-consuming manual tasks can reduce many benefits of single-use bioreactors and could even introduce contamination.

Single-use sensors offer a number of advantages to scientists using disposable bioreactors: lessening contamination risks and eliminating cleaning, associated validation, sterilization, and probe-calibration steps. Despite the benefits of these sensors, the biopharmaceutical industry has been slower to adopt them than single-use bioreactors. One reason for that was stability issues related to irradiation, drift, and sensor lifetime of optical pH sensors compared with traditional probes. Also, few single-use bioreactors come ready equipped with these sensor types at different scales.

Here, we describe Sartorius Stedim Biotechās integrated single-use sensor assemblies for different scales of single-use bioreactors. They are designed to ensure robust performance and be comparable to conventional probes. Case studies show that in real large-scale cell culture runs up to 1,000-L scale. Advances in single-use sensor design and performance could enable the biopharmaceutical industry to move closer to completely single-use production of biologicals of consistent quality.

based on fluorescence and luminescence principles, which are well-established methods of determining those parameters for cell culture (6, 7). When fitted to a single-use bioreactor, these sensors are connected to a measurement amplifier that transmits light of a specific wavelength to a sensor patch. Fluorescent dyes in that patch are stimulated by sinusoidally modulated light, allowing pH or O2-dependent emission intensity to be captured by a phase shift from an excitation to a fluorescent signal (8).

Table 1 summarizes the main features of optical single-use DO and pH probes (from PreSens Precision Sensing GmbH) that are used in Sartorius Stedim single-use bioreactors. DO and pH patches are fixed on the inner surface of a single-use bag or container, allowing both parameters to be measured noninvasively from outside through the polymer wall. That eliminates contamination risk because the sensors are introduced to the bioreactor assembly before sterilization. The single-use DO sensor offers additional advantages over traditional, reusable, glass Clark electrodes because it requires no electrolytes. That significantly reduces equilibration times, which saves time in use by making the integrated single-use bioreactor and sensor ready to calibrate with cell culture media at the point of installation.

For seamless scalability of biologics and vaccine production processes, single-use sensors need to be integrated into at laboratory-, pilot-, and manufacturing-scale bioreactors. That reduces the risk of differences in cell culture parameters that can come with different measurement principles. It enables process development and biologics production with consistent CQAs at each scale throughout a productās life-cycle, so processes can be scaled and transferred without needing time-consuming additional investigations.

Sensor patches often have to be located in different places and connected up differently for optimal measurement of pH and DO, depending on the bioreactor design and materials and/or the type of cell culture mixing used (Photo 1). For example, on a rigid, stirred, 2-L single-use UniVessel SU bioreactor, single-use sensor patches are integrated into the vessel bottom, and read-out comes directly through free-beam optoelectronics. In the rocking motion BIOSTAT RM system, sensors are installed by means of tubes and their read-out comes through a flexible optical fiber cable. On a BIOSTAT STR bioreactor, sensors are integrated into sensor ports that protect them during gamma irradiation. All BIOSTAT STR bags can be equipped with a second pair of sensors to provide back-up probes because such bioreactors are designed for good manufacturing practice (GMP) production.

Sterilization: To produce fully integrated, single-use bioreactors and sensors that are ready-to-use and consistent in quality, the assembly must be provided as one sterile unit. Bioprocess scientists then can begin using such integrated bioreactors without having to fit sensors, which can introduce the possibility of contamination.

Gamma and beta irradiation are established methods of sterilizing single-use bioreactors. However, single-use pH sensors can be affected during irradiation by acidic gases and ozone generated by gamma or beta beams in the surrounding air. That may cause a loss of active dyes in sensor patches and impair measurement performance, especially for pH dyes. When producing integrated bioreactor and pH-sensor assemblies, methods are needed to protect sensor patches from residual air in those assemblies. For example, BIOSTAT STR stirred systems contain internal stirrers and spargers, which prevent bags from folding flat and thus create air pockets.

A highly specialized design of sensor port protects sensors during irradiation of such containers (Photo 2). It has a closed (irradiation, storage) position that isolates sensors from the air and a working position in which they come into contact with the bag lumen. By contrast, rocking-motion single-use bioreactors can be flattened to contain marginal residual air volumes, making no additional measures necessary to protect them during irradiation. Similar to such bioreactors, the residual air volume in UniVessel SU vessels is small, so optical sensors remain unaffected. Also, UniVessel SU bioreactors are beta irradiated, which is a gentler type of sterilization. 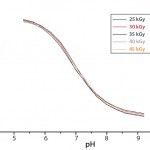 Gamma irradiation does not affect single-use pH probe performance alone. Figure 1 demonstrates reproducible and consistent pH measurements of optical pH sensors that have been subjected to a broad range of irradiation doses. The data show that it is possible to sterilize a single-use sensor and bioreactor together and provide a fully sterile and functional assembly, which is ready to use from installation.

Calibration: From each batch of ~1,000 patches, a defined number of sensors are used to generate calibration values after irradiation. This is part of routine quality control (QC) and ensures that sensors in each batch meet stringent quality acceptance criteria. An integrated quality management system ensures full traceability of all production steps, including raw-material lots, intermediates, and sensor components. 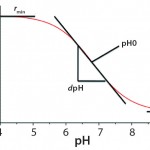 Calibration of single-use PreSens pH sensors involves four calibration parameters approximated from the sigmoidal calibration functions: rmin, rmax, dpH, and pH0 extrapolated by a curve fit according to the Boltzmann equation (Figure 2). For calibration of a single-use PreSens DO sensor, the correlation between oxygen concentration and luminescence lifetime is expressed by the Sternā Volmer equation (Figure 3). Because oxygen and luminescence are directly proportional, only two points measured at 100% and 0% air saturation are necessary for calibration. 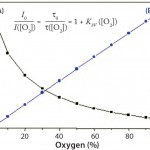 To calibrate a single-use pH sensor for specific cell culture process conditions, a one-point calibration is necessary after the medium reaches a temperature and CO2 equilibrium. This must be performed because of differences between cell culture media and reference systems, the latter having been used to determine calibration parameters. We recommend daily off-line sampling for pH measurement to determine whether deviations go beyond defined criteria, typically 0.1 pH units. If it has done so, then a single-use pH sensor should be recalibrated. 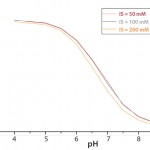 A recalibration is also necessary when the ionic strength of a medium is altered (e.g., through addition of base to control pH). Figure 4 demonstrates a calibration-curve shift caused by changes in ionic strength over a range of 50 mM to 200 mM, which represents the most common range for mammalian cell culture processes and related feeds.

Ionic strength represents electric field strength based on the total amount of ions in solution. They influence conductivity of electrolytes, including the electrolyte gel in optical patches. By comparison, osmolarity measures the total amount of osmotic active substances in solution, representing not only ions, but also carbohydrates and proteins, which do not influence ionic strength of a medium. 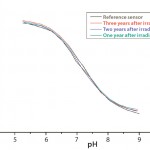 Fluorescence dyes in optical sensors are sensitive to light. Exposure to intense light can cause irreversible damage to those sensors, making them inoperable. So bioreactors with integrated optical sensors must be stored in light-proof packaging until bioprocess runs begin to keep the effect of light to a minimum established for all Sartorius Stedim Biotech single-use containments. And during operation, users should minimize direct exposure of optical sensors to light sources. 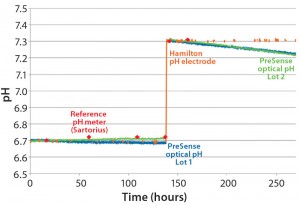 As part of implementing optical sensors into different single-use bioreactors, we executed detailed performance tests. The first test measured pH every minute for >11 days at 37 Ā°C with a buffer system at an ionic strength 150 mM (Figure 6). The pH value was controlled using classical pH probes (Hamilton easyferm), with reference pH measured using a Sartorius bench-top pH meter. That pH probe was kept in potassium chloride (3M KCl) and calibrated before every single measurement.

After 140 hours, we shifted the pH from 6.7 to 7.3 using 1 molar sodium hydroxide (1M NaOH) and recalibrated the optical single-use sensors. Deviation between the optical single-use pH sensor and the reference pH probe was <0.03 pH units for about 200 hours. That equates to ~12.000 single measurement points and <0.1 pH units for about 270 hours, ~16.000 single measurement points. This test demonstrated long-term stability and accuracy of the single-use pH sensors compared with conventional bench-top and inline pH probes with a buffer system. 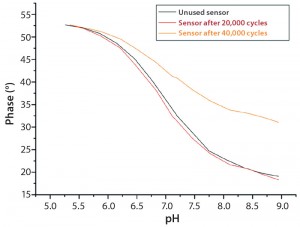 Figure 7: Calibration curves of used pH sensors compared to unused sensors; good comparability is achieved between a sensor exposed to
20.000 measuring cycles and an unused sensor.

In cell culture, pH control is important to maintaining optimum growth and metabolism. Frequent pH measurement is not required with Chinese hamster ovary (CHO) and other mammalian cell lines because their growth and metabolism are slower than those of microbial cultures, with typically simple step changes in pH involved. So a measuring frequency of once per minute is again effective to provide sufficient data for robust control loops.

Optical pH sensors have a life time of ā„20,000 read-outs. At that measuring frequency, continuous measurement over 14 days is possible without any significant loss of performance during cultivation (Figure 7). 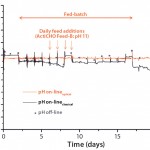 Figure 8: Measurement of pH by a single-use, optical pH sensor and a classical online and offline pH probes of a 50-L fed-batch CHO cell culture grown in a BIOSTAT STR 50 bioreactor; the single-use pH sensor was recalibrated daily.

Single-use pH sensors integrated into BIOSTAT STR 50 and 1000 bags provide comparable results to on-line and off-line pH probes, as shown with 50-L and 1,000-L fed-batch CHO cell cultures over 17 days (Figures 8 and 9). Our results demonstrate that integrated single-use pH sensors are reliable and robust and provide a scalable method for monitoring pH during a full cell culture run.

In bioprocess applications, single-use sensors provide consistent and precise measurement that compare well to traditional online and offline probes. Single-use bioreactors with integrated optical single-use sensors are available at different scales (from 15 mL to 2,000 L). The sterilization and design of optical probes have been optimized for the type of single-use bioreactor to which they will be fitted. That allows for robust measurement performance throughout each cell culture run. The sensors provide process development scientists with good data comparability across scales: from small-scale rigid vessels used in process development and characterization all the way to 2,000-L bag-based bioreactors for clinical and commercial production (including seed-train bioreactors such as rocking-motion systems). 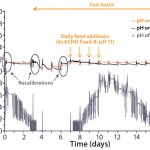 Figure 9: Measurement of pH by a single-use, optical sensor and
classical on-line and off-line pH probes of a 1,000-L fed-batch CHO cell culture; the single-use sensor was recalibrated on days 1, 3, and 6.

Easy and straightforward single-use sensor operation and calibration provides accurate data as long as optical sensors are protected from direct light. Such sensors are integrated into single-use bioreactors to create a single, sterile, sealed unit. That allows for rapid set-up with easy alignment with automated control systems and prevents bioreactor contamination by requiring no fitting of reusable probes.