Vaccines are among biotechnological products characterized by continuous growth over the past decade. According to a 2011 report, the global vaccine market is expected to reach US$34 billion in sales by 2013 (1). Much development can be ascribed to vaccine treatments for cancer, autoimmune, and infectious diseases (which have risen significantly) as well as the growing worldwide population and emergence of new pandemics. Although to date the main health impact of vaccines is still in disease prevention, the first generation of therapeutic vaccines have been FDA-approved (e.g., such as Provenge cell therapy from Dendreon), and further candidates are under development (2).

Compared with eggs, modern alternatives can reduce production time by up to six months (by omitting egg-supply organization) and minimize contamination risk by viable and nonviable particles (through less laborious application of closed devices). Moreover, they offer higher initial purity and allow for easier process scale-up and automation. Vaccine candidates made in cell culture are well-tolerated by people who experience an allergic reaction to animal albumin.

Spodoptera frugiperda (subclone 9, known as Sf-9) cells and Trichoplusiani cells (BTI-Tn-5B1-4, trademarked by Invitrogen as High Five cells) are today’s “workhorse” cell lines for producing VLP vaccines with recombinant BEVS. High Five cells grow in suspension with serum-free culture media formulations and reach middle cell densities (MCDs) in batch mode. While doubling (in 18–29 hours at 27–28 °C and an optimum pH of 6.3), they can deliver 2–15× higher specific yields of secreted proteins than Sf-9 cells, which differ in metabolism (7, 8). But they may require chemical agents to ensure cell protection in dynamic cultivation systems (e.g., Pluronic F68 supplement from Invitrogen), reduce foam formation (e.g., antifoam C), and regulate pH (1M KOH). Because CO2 inhibits High Five cell growth, their culture air is not mixed with it. Oxygen often becomes the limiting factor in High Five cell cultivations, especially in cell expansions aiming at high cell densities (HCDs) or in the VLP production phase, when cells consume more oxygen than they do in their growth phase. Reported dissolved oxygen (DO) levels are around 50% (9, 10).

BEVS-based High Five cell VLP production is a typically short two-stage process. After the one-to two-day growth phase of uninfected cells, VLP production is induced after cell infection with the recombinant BEVS for a three-to four-day production phase. Single-use devices, commercially available for all main processing stages up to middle-volume scale, can be advantageously implemented at this stage.

That especially applies to upstream processing (USP): production of cells and baculoviruses for a working cell bank (WCB) and working virus bank (WVB), respectively; freezing and storage of those banks, as well as their expansion; and production of VLPs. In addition to cryogenic vials (cryovials from Corning, Nunc, Greiner, and others) and bags (e.g., Cryobag products from Origen) for freezing and storage, vaccine companies use disposable shake flasks or spinners for the first expansion steps, then single-use bioreactors for cell and virus production at multiliter scale cultivation and VLP production. 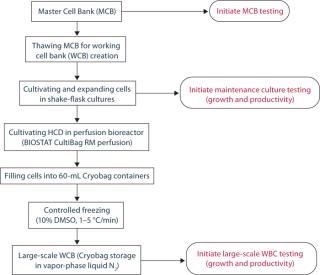 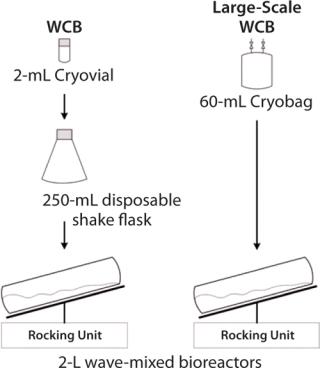 Similar attempts at perfusion-based, one-step inoculations and expansions have been published by other groups using mammalian cells (12,13,14). For example, Heidemann et al. successfully developed a bag-to-stirred-bioreactor inoculation, producing the perfusion-based HCD volume in a reusable cell-culture bioreactor (12). By contrast, Alahari (13) and Tao et al. (14) used wave-mixed bioreactors for cell banking and expansion, with HCD freezing in vials rather than bags.

That can limit the scale of the cell culture bioreactor, which should be directly inoculated to simplify and speed-up USP. So we designed a scalable cryogenic-bag-to-CultiBag inoculation and cell expansion procedure for High Five cells as an innovative case study (Figures 1 and 2).

We obtained High Five suspension cells from Invitrogen and cultivated them in Express Five serum-free culture medium from the same company supplemented with 18 mM l-glutamine from Sigma-Aldrich. We measured cell densities and viabilities with a ChemoMetec NucleoCounter instrument. For offline analyses of medium nutrients (glutamine, glucose) and metabolites (lactate, ammonium), we used a BioProfile 100 analyzer from Nova Biomedical. In addition, we observed cell morphology microscopically.

Large-Scale WCB Creation: For large-scale cell banking, we chose the Biostat CultiBag RM 20 perfusion system (Photo 1) from Sartorius Stedim Biotech to grow High Five suspension cells at HCDs and >97% viabilities within four days. We used commercially available perfusion bags (2 L total volume) with a 1.2-µm membrane and optical pH and dissolved oxygen (DO) probes (Photo 2). A polyethersulfone (PES) perfusion membrane was fixed to the bottom of the bag and connected to the harvest tube. Before starting the bioreactor, we always welded perfusion in-and outlets with one bag full of culture medium and another left empty to collect supernatant. With the storage bags (Flexboy 10 L from Sartorius Stedim Biotech) on balances, we filled bioreactor bags with culture medium (to 1-L culture volume), equilibrated them to process temperature, and calibrated the optical sensors. We then inoculated the bags with viable cells at 1 × 106 cells/mL produced in a 500-mL Corning shake flask after splitting a 250-mL shake-flask culture.

In each perfusion run (for which sampling was performed twice a day), the single-use bioreactor operated according to Table 1. While only monitoring pH values in the perfusion bags, we monitored and regulated DO. Cascade-based regulation used increased rocking rates and angles and pure oxygen (instead of air) injected into the culture broth if required. Continuous perfusion began 30 minutes post inoculation (p.i.) at an initial perfusion rate of 0.24 L/day. We exponentially increased that rate to 1.4 L/day 36 hours p.i., then linearly increased it to 2.9 L/day until the end of the process (Photos 1 and 2, Table 1).

With extensive testing, we investigated handling, disruption, and leakage of different cryogenic bag types at storage temperatures between –170 and –190 °C. The most convincing results came with 60-mL and 120-mL KryoSure FEP bags from American Fluoroseal. And we decided to use the 60-mL bags made of fluorinated ethylene propylene (FEP) for generating our cryogenic-bag–based WCB.

We transferred HCD High Five suspension cell broths from wave-mixed perfusion bags to 1-L Flexboy single-use bags from Sartorius Stedim Biotech. Feeding cryomedium (Express Five SFM supplemented with 10% DSMO) diluted the cells to viable cell densities (VCDs) of ~2.2 × 107 cells/mL. After that, we aseptically filled the cell stock solution into the KryoSure bags (50-mL culture volume in each), then placed them in aluminum storage boxes (stainless cassettes from Custom BioGenic Systems) to keep them on ice until our filling procedure was complete. After transfer into a precooled controlled-rate freezer (Labtec Kryotank S1500, CBS) the bags froze under controlled conditions at 1–5 °C/minute (Figure 3). When the cells reached –170 °C, we stopped the freezing program and placed the bags in their metal storage boxes into a CBS 1500 AB cryovessel from Custom BioGenic Systems. They remained in the liquid nitrogen (LN2) vapor phase until needed. 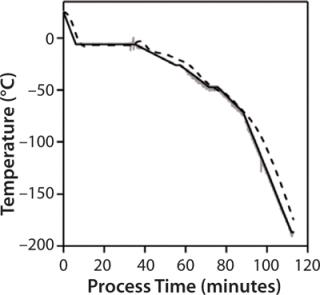 Inoculation and Cell Expansion: For the one-step cell inoculation and subsequent expansion, we used Biostat CultiBag RM 20 system in repeated fed-batch mode, with sampling twice a day. One frozen 60-mL KryoSure bag delivered the seed inoculum for each Biostat bag (optical). Two hours before inoculation, we filled the bags with 500 mL of culture medium to equilibrate the process temperature and calibrate the sensor probes (16 rpm, 0.1 vvm, 27 °C, 6° angle). Afterward, we placed the culture bags in a 37 °C water bath and thawed the High Five suspension cells over three minutes to minimize formation of intracellular ice crystals. Without additional washing to reduce DMSO concentration, cell broth from each KryoSure bag was aseptically transferred through a spike port for an inoculation rate of 1 × 106 cells/mL. We operated the single-use bioreactor at 27 °C with an aeration rate of 0.2 vvm. Rocking began at a 6° angle and 16 rpm. DO was regulated by increasing the rocking rate and added aeration with pure oxygen (8). Removal of culture broth and successive feeding (48 and 72 hours p.i.) ensured MCDs an
d viabilities >97% in the shortest possible time.

We compared our results with those of cultivations in 500-mL single-use shake flasks (100-mL culture volumes with culture broth removal and feeding performed twice) seeded with cells from 60-mL cryogenic bag, and results from a vial-based cell growth procedure in wave-mixed bioreactors. In the latter (Figure 2A), the bioreactor bag (batch mode, 1 L culture volume) was seeded with cells from a maintenance shake-flask culture (50-mL culture volume). Parallel to each bioreactor run, we carried out a growth control experiment with a shake-flask culture. The control culture was seeded with inoculum from one vial. All membrane-aerated shake flasks (Corning) were inoculated with 1 × 106 viable cells/mL and shaken at a temperature of 27 °C, with a frequency of 100 rpm and a 25-mm shaking diameter in a Multitron Cell incubator from Infors.

Figure 4 shows typical results for High Five suspension cultures from three independent perfusion runs carried out using 2-L Biostat bags with the above-described set-up. Cell perfusion ended when VCD peaked at ~4 × 107 cells/mL on day 4 (Figure 4A). Although glucose was consumed in higher amounts than supplied by the stepwise-increased culture medium flow, its concentration did not fall below 5 g/L (Figure 4B). Meanwhile, we kept ammonium concentrations (Figure 4C)

In all our perfusion runs, no membrane fouling or clogging occurred. Direct aeration started (20% direct oxygen supply) when the rocking rate was 32 rpm at a 6° angle. At that point, the VCD reached a value of 1 × 107 cells/mL. When the bioreactor and cell harvest stopped, the direct oxygen supply had increased to 60%. It’s important to note that increasing rocking rates >32 rpm caused strong foam formation. So without adding corrective agents, we decided to fix 32 rpm as the maximum rocking rate for our perfusion process.

A total cell yield of 4 × 1010 cells came from 1 L of culture volume with 0.034–0.037 hourly maximal growth rates. That corresponded to doubling times between 18.7 and 20.4 hours. We grew up to a sevenfold higher number of cells with the Biostat CultiBag RM 20 perfusion culture than in batch experiments (data not shown). Compared with shake-flask mass propagations running in feeding mode (data not shown), the CultiBag cell yields were about 10-fold higher. Because we used the generated cells for subsequent HCD freezing in cryogenic bags, we did not maximize VCDs in our perfusion process; they can be up to 10× higher from our experience. In fact, the established perfusion process for one bag allowed successful preparation of 36 cryogenic bags at a culture volume of 50 mL and VCD of 2.2 × 107 cells/mL.

In the exponential phase of High Five cell growth, growth rates and doubling times for the vial-and cryogenic bag–based shake-flask experiments and the shake-flask–based cell growth procedures using Biostat bags running in batch mode were compared with the courses and data from our new approach (Figure 6). However, the lag phases of cells frozen in cryogenic bags and expanded in 2-L Cultibag bags were 24 hours longer (Figure 5A) than in the other cultivations. 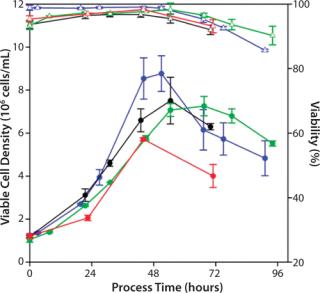 We are now investigating the scalability of this new approach. Instead of 60-mL KryoSure bags, we’ve already used 120-mL bags (115-mL culture volume) successfully; instead of a 2-L Cultibag bag, we have directly inoculated a 10-L bag with High Five suspension cells. We’ve estimated the optimum initial culture volume to be 2.5 L. After one dilution step (cell broth removal, feeding to 5 L, and dilution of VCD to 1 × 106 cells/mL, 26 hours p.i.), we measured peak VCD at 1.1 × 107 cells/mL at 120 hours (maximum growth rate 0.04/h, doubling time 18.5 hours).

In total, 5.5 × 1010 cells came from each Cultibag bag. Here, the growth courses (including lag phases) were identical to those in the shake flask experiments. A total yield of 5.5 × 1010 cells would seed a 50-L culture volume with 1 × 106 cells/mL for subsequent VLP productions. The seed inoculum could come from one 120-mL cryogenic bag within four days. Normally, seed-inoculum production for a 50-L culture volume (from vials and expanded in shake flasks or spinners) takes 10 days or more.

We have developed a new time-saving, scalable USP approach suitable for modern VLP vaccine production based on High Five suspension cells at pilot scale. We minimized inoculum expansion time and provided a large volume of cells from a WCB cryopreserved in bags. We successfully banked and expanded cells with a single-use, wave-mixed Biostat CultiBag RM 20 bioreactor. This procedure supports a fully disposable USP, w
hich is popular for modern vaccine manufacturing today.